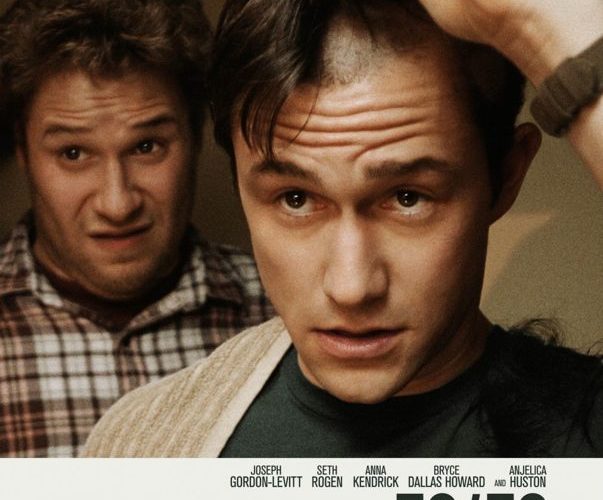 Drawing from a dark time in his own life, first-time screenwriter Will Reiser translates the good, the bad and the goofy elements of his battle with a rare and deadly form of cancer to the big screen in 50/50.  The film, which is produced and co-star’s Reiser’s longtime friend Seth Rogen, blends the dark subject matter of death and disease with a defiant and daring sense of humor to create something emotionally fraught yet deeply funny.

Joseph Gordon-Levitt stars as Reiser’s onscreen alter-ego Will, a 27-year-old nail-biting everyman whose life is shaken like an Etch-a-Sketch when he discovers he has cancer. Bewildered, Will protests to his apathetic doctor, “That doesn’t make any sense though. I don’t smoke. I don’t drink. I recycle!” It’s this brand of sincere yet sharp humor that makes 50/50 a standout. As Will turns to his flighty painter girlfriend (Bryce Dallas Howard) and his immature but loyal buddy Kyle (Seth Rogen) for support, the film’s insistent sense of humor prevents it from becoming a pity-inducing tearjerker. Instead, it becomes a showcase for Gordon-Levitt who is devastating as a young man forced to face the very real possibility that his body is killing him. While a less skilled performer might make Will a maudlin moaner, Gordon-Levitt imbues Will with an underlying rage at the unfairness of his situation yet tempers it with an indomitable spirit. It’s a complex and fully realized portrait that binds us to Will in his life or death journey, and is sure to draw Levitt even more respect and accolades. Actually, 50/50 is stacked with poignant performances, from Angelica Huston as Will’s devoted but overbearing mother to Matt Frewer as a fellow chemo patient with a silver-lining mentality and pot-laced macaroons. But the other real stand-out here is Seth Rogen as Will’s always jovial best friend. Sure, Rogen is essentially playing a thinly veiled version of himself, but his chemistry with Gordon-Levitt is absolutely dynamic. Their friendship is so vivid that it radiates off the screen, as Kyle takes Will to doctor’s appointments by day and dance clubs by night! In fact, the push and pull of their relationship gives the film its most solid emotional weight, drawing attention away from a love subplot that never really works.

The talented Anna Kendrick takes on the underwritten role of Will’s cancer-coping counselor, a 24-year-old almost-doctor who is painfully awkward in her initial attempts to comfort him. It’s clear these two will plod through this awkwardness and fall for each other, but Kendrick and Gordon-Levitt lack a sexual chemistry and so read more as brother-sister than boyfriend-girlfriend, resulting in some scenes that feel more forced than fraught. Sadly, director Jonathan Levine (The Wackness) stumbles on several instances, including a number of music-swelling montage sequences that lack any sense of nuance and feel painfully amateurish. Yet despite its flaws, 50/50 is not to be missed. With it’s defiant yet winsome humor, Gordon-Levitt’s heartbreaking and compelling portrayal, and Rogen’s heartfelt yet hilarious performance, there’s plenty here to savor. Shouldering the story and its weighty subject matter together, Gordon-Levitt and Rogen create something unforgettably poignant yet unquestionably invigorating, 50/50.