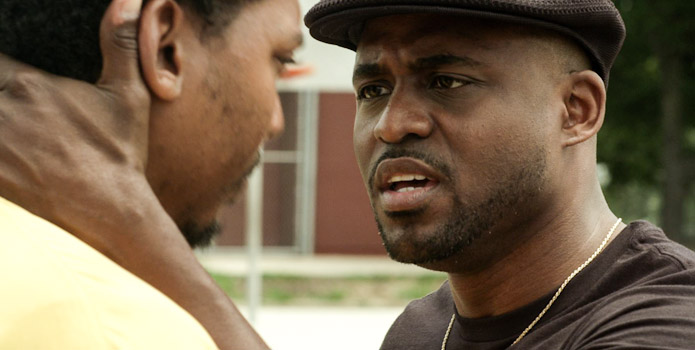 Tommy Oliver’s tender, personal 1982 is a strong debut feature. Starring Hill Harper as Tim Brown, a hardworking family man, he’s mostly hard at work launching his second laundromat in Philadelphia. His eight-year-old daughter Maya, played by Tori Zee, is a little force of nature who more than holds her own in a company of accomplished professionals. When a dangerous gangster Alonzo (Wayne Brady) re-enters this neighborhood, he seeks out Zee and her mom Shenae Brown (Sharon Leal), leading her into a downwards spiral of drug addiction. The period setting is an interesting choice and one that only subtly reflects the realities of the time. There is no political agenda, as the war on drugs is a personal one. A strong character study, the film is foremost about the effects of drug addiction on loved ones and mostly on Tim. It’s easy to compare 1982 to several films by Tyler Perry, a director who touched upon these themes multiple times including drug addiction and marriage infidelity (in Diary of a Mad Black Women, I Can Do Bad All By Myself and recently in Confessions of a Marriage Counselor).

However, Oliver’s touch, while a bit more subtle, is more restrained and mature. He evokes emotions through careful character study, instead of Perry’s amped-up theatrical style of manipulation. 1982 announces his arrival as a new, interesting independent voice. Inspired by his own life, Oliver and his cast create an intimate realistic portrait a common struggle, most heartbreaking when Tim explains to Maya he’s changed the locks on the doors, and that to help her mother, they must shun her until she’s ready to change. Brady is effective as Alonzo, a major departure for the squeaky clean TV personality, sending Shenae back on her self-destructive path. Leal’s Shenae lacks some key development, as we’re not given easy answers about her past, and while set in 1982, the film is focused in present tense, living in the “now.” While there are a few atmospheric touches missing, the film is alive with superb performances from Harper, Leal and Zee.

Although the story contains familiar beats and a few unanswered questions — perhaps we can blame those on drugs — it’s a carefully observed personal film that I think will be useful for those in a similar situation to Tim. The attitudes and treatment for addiction are changing, however, the emotions I suspect remain the same. Here is a portrait of a man trying to keep his family together facing some incredible consequences. 1982 is a strong debut feature with several brilliant scenes that ought to believe in itself a bit more; the subtle scenes are truly exciting, but when it veers towards Tyler Perry-esque manipulation, it comes close to derailing.

1982 plays TIFF on September 8th, 9th and 14th. See our complete coverage below.