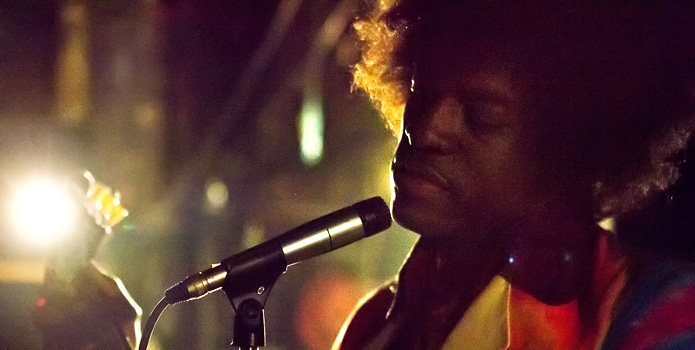 [TIFF Review] All Is By My Side

On paper, a biopic of Jimi Hendrix without the rights to his music seems like a complete waste of time. Even with John Ridley‘s All Is by My Side detailing the guitarist’s two years prior to the Monterey Pop Festival in 1967, the thought of not using an iconic track for the credits is a daunting one to overcome. Thankfully, with a bit of ingenious sound design and multiple sensory collages of images and music, we’re able to experience the tale as though inside Hendrix’s one-of-a-kind mind. It’s an attempt to bring a line from the script—”I want them to see the music like I do”—to life, putting us in his shoes rather than merely positioning us on the outside looking in like so many other biographies are love to do.

Hendrix (André Benjamin) was a uniquely artistic creature and this profile captures his myriad idiosyncrasies as well as a brief moment in the history of rock and roll. Introduced to him while jamming with a band in NYC to about twenty people caught up in conversation, no one even claps after their set besides a young woman named Linda Keith (Imogen Poots) seated at a table in the distance. The girlfriend of Rolling Stones guitarist Keith Richards, Linda appears to have an eye and ear for the axe and knows Jimi’s a force ready to be unleashed on stage. She takes him under her wing, desperately trying to coax out the rockstar from his meekly modest personality until expending all her contacts on embarrassed tryouts in which he refuses to take control.

The stars do align, though, when she runs into The Animals’ bass player Chas Chandler (Andrew Buckley) transitioning into artistic management. He goes to see Hendrix play, Jimi finally rises to the occasion, and a mini-tour of England is set to see what interest can be drummed up to possibly record a record. It’s here he meets Kathy Etchingham (Hayley Atwell)—a mercurial woman with whom Hendrix begins a tumultuous relationship—as Linda takes a backseat to return to her previous life. The Brits eat him up, The Jimi Hendrix Experience is born, and the legend we know becomes earmarked as one of two English acts invited to the aforementioned California show. It’s the first exit on a road to fame if he can quell his easygoing nature from imploding into brutal, ambivalent rage. Ridley’s first time directing a feature film since his 1997 debut—he’s also being praised for co-writing the screenplay to Steve McQueen’s 12 Years a Slave—All Is by My Side might not have the most riveting of plots, but it does have a ton of style. My brief synopsis above is pretty much it story-wise with a few emotional hiccups to add interest despite everyone knowing he’ll eventually become the man we remember today after Monterey. The true appeal is actually in watching it unfold as though a musical composition in its own right. There’s visual reverb with archival video of conceptually relevant songs Hendrix might have been listening to juxtaposed with images flashing in the transitions. Some scenes even drown all words to allow the background minutiae to overpower our senses.

It’s no wonder Ridley took great pride in thanking his crew—with special mention to editing and sound mixing—while introducing the world premiere screening at the Toronto International Film Festival, because they’ve crafted a intriguing cinematic work together. The style becomes a character of its own to exist alongside the mix of fun and thought-provoking periphery players coming and going throughout who each get introduced with an awkwardly paused, unflattering freeze frame. Burn Gorman’s Michael Jeffery adds great comic relief in a bit part; Danny McColgan’s Eric Clapton is a lot of fun (as is the actor playing Cream drummer Ginger Baker, despite having no lines); while Ruth Negga’s extended role as groupie/friend Ida gives a chaotically stressful period of the story some much needed stability.

That calming influence is a welcome departure from the two female leads oftentimes finding themselves inconsolable when it comes to Hendrix’s indifference to anything but the music until he deems it worth pursuing. Both Atwell and Poots are strong in their roles despite not perhaps being as three-dimensionally written as one would hope. Ultimately sounding boards for Hendrix to wallow in self-hate or revel in the joy of musical success, they attempt to steer his psychological tempestuousness before realizing they have no control. Atwell earns our sympathy to a point despite oftentimes being as emotionally off-the-handle as her man while Poots stays pretty consistently in control as more mentor than love interest. It’s her Linda Keith out of everyone who can hope to corral Jimi when it appears no one can.

All these things—aesthetic, composition, acting—ultimately end up secondary when compared to the dynamic performance at the film’s center. The André Benjamin who blew me away in a two-episode arc on “The Shield” finally receives the chance to shine on the big screen without needing a comedic vehicle to render him charisma above talent. His rendition of Hendrix is more than mere impersonation although he definitely has the look, attitude, and cadence down pat. Benjamin embodies the guitarist’s peace loving mantra, his calm transformation from pacifist to aggressor to remorseful lamb rendering him unpredictably frightening while still the good-natured soul experiencing life’s beauty with a smile. When he’s playing the guitar on stage it’s as though we’re watching Hendrix himself. Maybe the music wasn’t necessary after all; the man proves enough.

All Is By My Side is currently screening at TIFF and one can click below for our complete coverage. 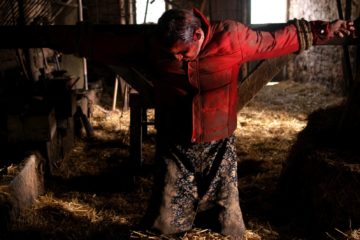