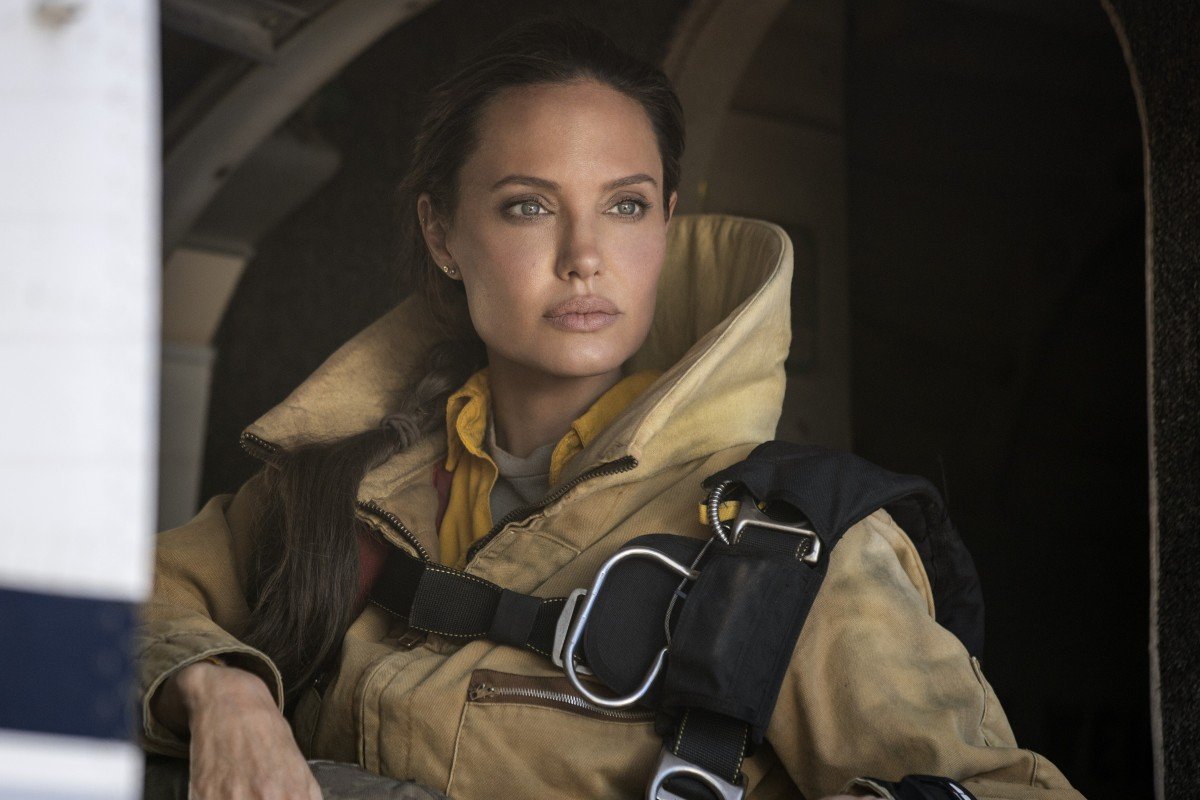 Reaffirming Angelina Jolie’s interest in efficient action storytelling, co-writer/director Taylor Sheridan’s Those Who Wish Me Dead, adapted from Michael Koryta’s 2014 novel, is a lean throwback to the type of muscular ’90s and early ’00s films that eschewed world-building and IP in favor of streamlined set-pieces. While the film still telegraphs the brand of gruff masculinity that made Sheridan your dad’s favorite screenwriter/showrunner, this time grafted onto Jolie’s hard-drinking smoke jumper Hannah, Those Who Wish Me Dead works mainly because it moves quickly and effectively. Distilling plot and character down to basic archetypes, Sheridan’s film is less concerned with the weighty thematic issues that sometimes bogged down his previous work, and is more than happy to showcase Jolie ridiculously contending with the compounding issue of simultaneously fighting assassins and a raging wildfire.

Rapidly setting up the moving pieces, Those Who Wish Me Dead begins with Hannah in exile, following a failed psych evaluation on the heels of a botched attempt to save three children during a wildfire. A heavy drinker with a death wish, she’s cast off to a fire tower, while those around her, including her cop ex-boyfriend Ethan (Jon Bernthal), worry. Ethan, whose relationship with Hannah is only thinly sketched out, is also an expectant father with his wife Allison (Medina Senghore), who runs a survival school. On a collision course with these characters is Owen (Jake Weber) and his son Connor (Finn Little), who are on the run from some mercenaries (Aidan Gillen and Nicholas Hoult) for reasons that the film, wisely, doesn’t care about. A “forensic accountant” who discovered some questionable financial activity, Owen high tails it to Montana, hoping that his brother-in-law Ethan might be able to provide him some needed protection.

With Gillen and Hoult’s blasé killers on his tail, it comes as little surprise when Owen is violently killed off, and Connor flees into the woods, eventually finding Hannah, who spends the rest of the film trying to protect him, while the assassins start a wildfire as a distraction and kidnap Ethan. After arranging these configurations, Sheridan methodically moves from set-piece to set-piece, escalating the stakes as the fire grows more untenable and the assassins become more desperate. The final act of this already expedient 100-minute film features a climax of a prolonged battle between the two sides as the fire spreads around them.

It’s all nonsensical to a degree, as Sheridan highlights and then underlines character motivation, juxtaposing Hannah’s previous failed attempt to save three young children from a wildfire and her possible redemption with Connor. Further, Bernthal’s good-hearted cop is strikingly similar to his tragic do-gooder in Sheridan’s previous Wind River. In her feature debut, Medina Senghore, playing his pregnant wife who can hold her own, is also a scene-stealing standout. While this shorthand is painfully obvious, it’s also economical, as Sheridan jettisons his now standardized neo-western pastiche for a series of increasingly ridiculous climactic moments, culminating in Hannah and Connor literally outrunning a wildfire.

Jolie seems more than game for the absurdity, highlighting an action hero physicality that hasn’t been seen since 2010’s Salt, as she outruns a lightning storm, jumps off a fire tower, and almost single-handedly fights off the mercenaries. Gillen and Hoult also seem to be having a blast, injecting a world-weariness into their otherwise conventional killers. While Sheridan and co-writers Koryta and Charles Leavitt hint at a larger world outside of the small Montana town, including an odd cameo by Tyler Perry as the man arranging for the hits, by the time the fire starts getting going, the film has already forgetting such pesky problems as intention and narrative coherence.

That is also not a knock, by any means. Unlike Sheridan’s previous feature Wind River, which made some interesting structural choices but often collapsed with its weighty and contentious treatment of sexual violence, as well as his soapy TV show Yellowstone, Those Who Wish Me Dead is a violent, enjoyable action film that doesn’t aspire to preach. Instead, the film foregrounds Angelina Jolie reclaiming her title as a preeminent action star, moving at such an energetic speed that by the time you start to think about the sheer insanity of the plot, the credits are already rolling.

Those Who Wish Me Dead is now in theaters and on HBO Max.