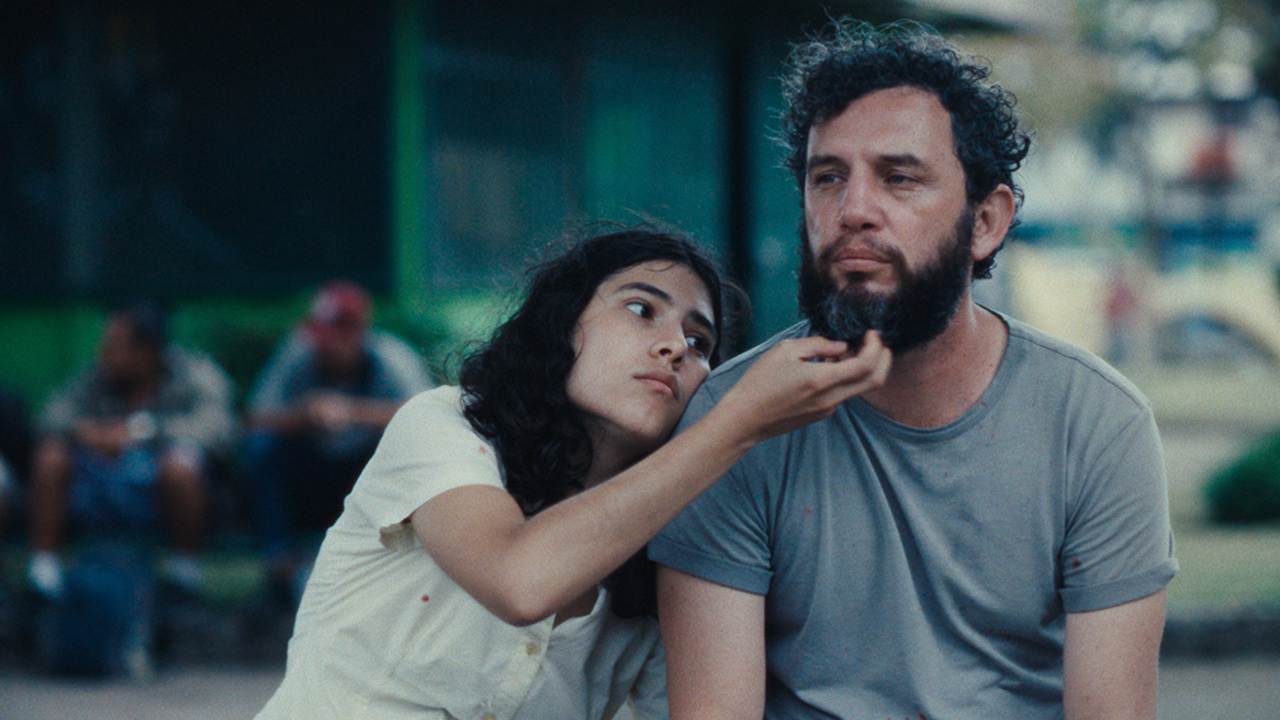 Nothing catches fire in Valentina Maurel’s I Have Electric Dreams, but the atmosphere is so inflammable, the air so taut, everything could ignite at any moment. True to its title, this cumulatively harrowing tale of a 16-year-old girl and her estranged, anger-prone father feels like it’s been yanked out of an electric storm. Even the frames carry a kind of static, throbbing in-sync with parent and child as they crash into each other only to drift away and collide again, each confrontation more seismic than the others. To be watching Maurel’s feature debut is to bear witness to a self-destructive waltz; there are scenes of almost unbearable sadness and loneliness, but Dreams is no dirge, and all dread the film accrues only makes its closing catharsis so much more affecting.

The girl’s name is Eva (Daniela Marín Navarro); her father’s Martín (Reinaldo Amien Gutiérrez). We meet them as he drives the family home: Eva shares the backseat with her younger sister Sol (Adriana Costa Garcia) while her mother Anca (Vivian Rodriguez), next to Martín, gazes sullenly at the streets of an unidentified city in Costa Rica. We don’t yet know Martin and Anca are divorced, though it takes little for the car to swell into a battleground; no sooner has he parked that Martin storms out to punch the vehicle, leaving his ex-wife unfazed and daughters terrified. It’s the first in a long series of tantrums that pepper Dreams as volcanic explosions, as predictable as they feel cataclysmic. Shunned by Anca, Martín roams the city looking for a new flat and job, only to crash at some pal’s and pursue vague delusions of artistic grandeur (ostensibly a poet/sculptor/painter, he bolts from one reading circle to the next not to share his work so much as to hit on the unaccompanied women in attendance).

And Eva tags along, trailing after her father as his unwitting guardian. A less imaginative film would have positioned their relationship as dichotomy: Martín the deranged, aggressive narcissist versus Eva the luminous, prodigal child determined to help him heal. Maurel’s script is far more complex. Yes, Martín remains—for large chunks of Dreams—a spiritually broken and clinically self-absorbed rolling stone. But this isn’t his story; it’s Eva’s. And the portrait Maurel paints of her teenage heroine is a delightfully sinuous, ambiguous one.

Eva herself, for lack of a better word, is troubled. She may not be “possessed by a demon,” as Anca intimates in an early mother-daughter confrontation (explosions that may be less frequent than Martín’s but whose echoes are just devastating). Yet she races into Dreams at breakneck speed, determined to shed the last gangly vestiges of her adolescence and barge head-on into the world of grownups proper. And barge she does; it’s not long before she starts hobnobbing with her dad’s mates, a bunch of Bohemians twice her age who readily introduce her to sex and coke. Like Lucía, the 16-year-old at the center of Maurel’s 2019 short Lucía in Limbo, Eva’s coming-of-age unfolds as a distinctly corporeal journey. Growing up, as Maurel perceptively understands it, is to wake up to one’s own body: the space it occupies, its outer limits, the ways one can wield it to both pursue and trigger desire. Which is why, of all senses, touch is Electric Dreams‘ most cardinal.

Where Lucía ran into Limbo desperately trying to lose her virginity and the head lice festering on her scalp, Eva spends most of Dreams in a similar state of restlessness: scratching, itching, thrusting her body at the world. Maurel’s penchant for these haptic details—a shot of the teenage chafing her arm; rubbing herself against a table; not to mention the several physical altercations with her father—color Eva’s character and journey. Maurel addresses adolescence not with the tidiness of a nostalgist searching for lost time, but with a sense of tempestuous emotions always at play; what she conjures is a multi-sensorial, three-dimensional portrait.

That it all feels so lived-in, ultimately, is credit to both the writer-director as much as her outstanding leads. Amien Gutiérrez is an experienced stage actor; Marín Navarro a newcomer. Yet the film doesn’t suffer from unbalance. Quite the opposite: they are as convincing alone as they are together, and every outburst of rage, every fight between them could stand as its own micro project. The look that freezes on Amien Gutiérrez’s face as Martín clutches Eva’s arm isn’t all too different from the one Marín Navarro wears as his grip tightens, and the pain kicks in. It’s an expression of utter disbelief, a look suspended between awe and fear. Terrifying as they are, the way Maurel stages them and her two actors bring them to life turns these moments into something almost sacramental. They teach Eva the distance from her father, the mystery of seeing yourself in someone else’s skin.

I Have Electric Dreams screened at the Thessaloniki International Film Festival.