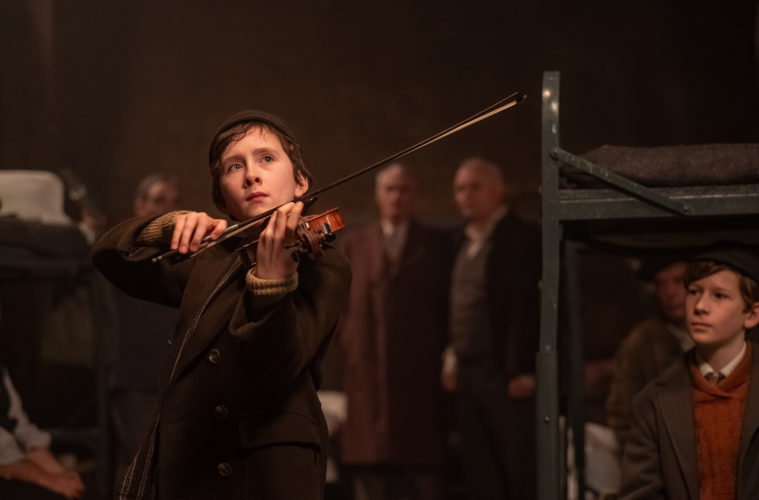 It’s been thirty-five years since Dovidl (Jonah Hauer-King) disappeared in 1951. He was a violinist—a genius virtuoso depending on whom you asked (himself included)—primed to make his London debut in a sold out house courtesy of the man that served as his guardian the previous decade-plus (Stanley Townsend’s Gilbert Simmonds). One second he had his prized instrument in-hand while friend/surrogate brother/Gilbert’s son Martin (Gerran Howell) told him to relax and enjoy the moment. Dovidl was finally going to show the world exactly how good he was, but he didn’t show for curtain. He didn’t return home later either. For all Martin and his family knew, Dovidl was dead. And that presumption held a terrible weight considering the same uncertainty loomed over his own family at Treblinka.

François Girard’s The Song of Names therefore begins with ample drama atop the mystery of a teenaged Dovidl Rapoport’s whereabouts. We assume Martin inquired where he could, but never having a lead only guarantees dwindling hope. So who knows the last time he even thought the opportunity of a reunion was possible? The look on his (Tim Roth as an adult) face upon suffering a case of déjà vu while judging a music competition makes me wonder if even he could recall. Everything flooded back, though. The emotions. The memories. The drive to find answers in case doing so was a matter of life or death regardless of how much time had passed. Far-fetched or not, Martin couldn’t ignore what might be his final chance at the truth. That’s where Jeffrey Caine’s script (as adapted from Norman Lebrecht’s novel) commences what’s described as a “detective story” despite coming off as more a series of chance encounters and dumb luck. One person leads him to the next as bits and pieces of what occurred after the cancelled concert come into focus. Not everyone remembers straight away where the subsequent stepping-stone is, but they get there eventually. And through it all Martin’s wife Helen (Catherine McCormack) wonders why he still cares. To her Dovidl was an arrogant man who deserted the Simmonds when they were counting on him the most. Pretending he was dead saved them from a lot of suffering. His being gone helped close old wounds. Suddenly each one was simultaneously ripped back open.

I have to believe Martin’s journey is more in-depth on the page since this lean on-screen counterpart is devoid of dead-ends. Maybe it’s fate then that’s put him on this specific path at this specific moment—I wouldn’t put it past the material considering so much hinges on Judaism and God always watching. Maybe the ease at which Martin follows Dovidl’s footsteps almost a half century later is meant to signify something greater than lackluster suspense. Because the film itself never does anything to overtly say this is true, however, it’s difficult not to see it as a product of needing to condense 320-pages into a two-hour film. The so-called investigation is thus a means to an end. It provides context for flashbacks and a road towards reconciliation. There are some powerful sequences conjured in the process. There’s nine-year old Martin (Misha Handley) resenting this new addition to the family before realizing Dovidl (Luke Doyle) is consumed by anguish due to knowing Germany is about to invade Poland while his family remained. There’s the notion that twenty-something Dovidl was drawn back to Warsaw to play for the ashes of the dead. And don’t forget a rousing, impromptu concert during an air raid between the clashing egos of Dovidl and an older Polish prodigy similarly ravaged by impending survivors’ guilt as the ones he loved are executed. Girard creates some unforgettable scenes from the sorrow of war and hope for the future. Hauer-King provides the character a complex storm of shame and anger.

The Song of Names‘ real impact, however, lies in the inevitable confrontation at the conclusion of Martin’s crusade. To hear (from Clive Owen as an adult) and see (Hauer-King again) what really diverted Dovidl from that concert is absolutely devastating. It’s a truth we’ve already assumed, but how it’s delivered is beautiful in its melodious account of horror. It’s so potent in fact that the decision to temper it with humor—no matter how punchy the rapport was between these two as boys—can’t help but take you out of the moment. To then also rush through the rest even faster now that the endgame nears is to handcuff its emotional resonance. We should be wading through the dense landscape of Dovidl’s pain, not awaiting petty restitution. Therein lies the problem. I say “petty” because that’s how it comes across. I know it’s not. I understand the pain Martin endured as a result of Dovidl’s absence, but comparing it to his seems counter-intuitive to the Holocaust-centered message. In some regards the entirety of the movie is trying to tell Martin that he matters too. That just because Dovidl was a genius everyone fawned over didn’t mean Martin was any less of a man destined for great things. Dovidl is baring his soul and explaining his choices and we’re sitting here alongside Helen with the presumption that he’ll simply disappear again. It becomes this competition for sympathy wherein the one who objectively suffered more is unceremoniously dismissed as being an albatross rather than a motivation.

Again, though, I wonder if it plays differently to those who’ve read the book and can bring that context with them. I unfortunately did not and can only react to what’s on-screen. While Roth and Owen are both very good (alongside McCormack’s cynic to keep them honest) and Hauer-King a highlight via melancholy and grief, the narrative propelling them forward always ends up feeling too shallow to really do their performances justice. It has no room to breathe as it chugs along to provide context and move to another check-stop that focuses too much attention and sympathy onto the privileged character at the detriment of the one who’s forever adrift, isolated, and of a fractured identity. This should be Dovidl’s story. Martin’s self-pity makes it his own instead.

The Song of Names opens in limited release on December 25.