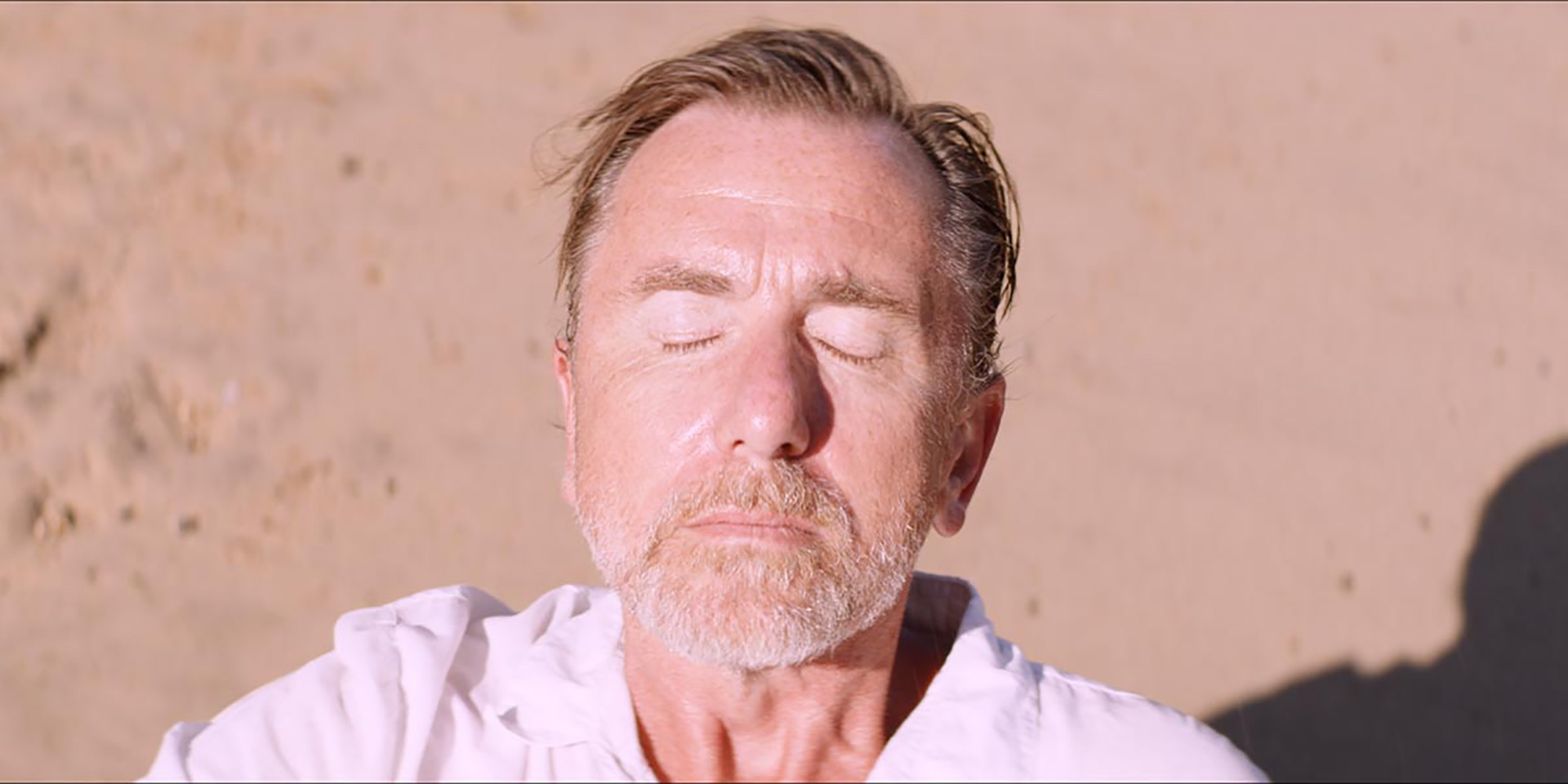 Writer-director Michel Franco throws the first curveball early during his latest film Sundown. We’ve already spent a bit of time with his quartet of European characters vacationing in Acapulco to make a few assumptions before workaholic Alice (Charlotte Gainsbourg) leans over to the quietly satisfied Neil (Tim Roth) and thanks him for coming along. Why wouldn’t he have? Isn’t he her husband and her kids’ father? He might be. Perhaps Alice and Neil are in the middle of a separation wherein he only agreed to come for appearances? It’s not like his laconic demeanor is giving anything away, though, so we’ll just have to wait until Franco decides to share the answer. And it won’t be the last time.

This one isn’t like New Order, a propulsive pace moving us forward. Sundown is slow, methodical, and meticulously constructed to keep us off-balance when each new revelation surfaces. Though there are a couple sharp bursts of violence to contend with, they exist to service narrative rather than create it. Franco isn’t really interested in any aspect of the film outside how it affects Neil’s trajectory. Family as a concept only factors in because it refuses to give up on him as easily as he does on it (if that’s what’s happening). This is his story and his alone. Neil Bennett is a man set adrift for reasons yet unknown. He’s searching for an escape from responsibilities to enjoy life in ways he can’t back home.

And that should be all you know going in—to say much more would ruin a few surprises. If my telling you something as seemingly innocuous as how Neil is related to Alice and the kids is too much to divulge, you can begin imagining the other bombshells waiting to explode. I’ll just say this: when tragedy strikes and everyone is called back to Europe, Neil stays to spend his days in a seedy hotel on the beach alongside a never-ending bucket of beers and the beautiful Berenice (Iazua Larios). Doing so is ultimately his prerogative, but the decision to lie to Alice and ostensibly hide from his life makes it theirs too. This is Mexico, after all. A big-tipping white man isn’t necessarily safe.

They inevitably worry about him. The more time that passes without him answering his phone means the greater the chance they return to see if he’s safe. What follows is therefore unwittingly his fault. Neil could have told the truth and kept them at bay. Not only does he know enough about Acapulco’s crime rate to tell Alice he’s somewhere safe—Franco said before the screening that while it’s his favorite place in Mexico, the city has obviously had its struggles of late—but he also witnesses a murder shortly after entrenching himself in the sand. He should thus understand the uncertainty of his position there. He should know that not caring about his own wellbeing doesn’t mean others won’t put their lives at risk for him anyway.

The result is an introspective character study caught against a gorgeous yet volatile backdrop. While I personally believe the payoff is worth the journey, I wouldn’t begrudge others for feeling they’ve been jerked around. Because when I say the reasons for why Neil is emotionally and psychologically adrift are yet unknown, I mean they stay unknown until about five minutes left in the film. It’s a bold maneuver that will surely turn some audience members off; waiting that long inherently renders everything before it somewhat purposeless. And in the way a lot of people talk about Franco as a filmmaker, this reality plays right into haters’ hands. They’ll say he’s exploiting the violence of his country so wealthy foreigners can settle “first-world” disputes.

And, to a certain extent, he is. What occurs might be authentically drawn, but presenting it at face value, sans context, as something that “happens” without rhyme or reason does seem a bit reckless. Because while Neil ultimately finds joy by staying there despite the tragedies, they are what we’re going to remember most: a Mexico depicted as a place to fear unless you have enough cash to insulate yourself inside an all-inclusive resort. Keeping Neil’s reasons for being there a secret also doesn’t necessarily help us care about what happens to him, either. Only in hindsight is his apathy, like the violence, exploited for complex dramatic import. Until that point, we’re merely following along to see what transpires next on his road to oblivion alone.

Is that enough? I think it is where worth is concerned. This is a showcase for Roth to portray a lost soul too numb to feel anything beyond surface reality. Alice carries too much baggage to handle her presence, Berenice provides sex and fun, but you can sense neither will be enough if things get too serious to walk away. Is Neil selfish? Sure. Does he have reason to be? Yes—to a point. If everyone else knew what he was going through, they’d probably leave him to his devices. That they don’t, however, turns his selfishness into danger. While I would have liked Franco to engage with this truth, letting Neil sleepwalk isn’t without merit. Sometimes we’re too lost to ever come back.