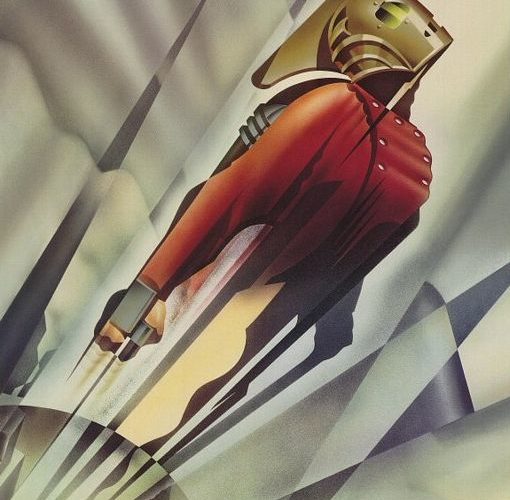 ‘The Rocketeer’ Reboot May Launch at Disney Released in 1991, the Joe Johnston-directed comic book movie The Rocketeer tanked at the box office upon release but ended up with quite a fervent fanbase in the years that followed. And since there is a fanbase, it shouldn’t come as a surprise that someone is looking to exploit that and remake the movie. Vulture reports that executives from Disney are going to be meet with writers in attempt to come up with a fresh take.

Does that mean that a brand-spankin’ new (and most likely CGI-heavy) Rocketeer is guaranteed? Of course not. But considering that anything “comic book” is hot, and The Rocketeer has become more popular of a movie over the years, I won’t be surprised if this happens. Or at the very least annoys us with “sort-of” news for the next half-decade.

For those of you who aren’t familiar with The Rocketeer, the story is set in Los Angeles, circa 1938, and follows a racing pilot named Cliff Secord who discovers a stolen rocket pack-prototype and becomes a crimefighter (guess what he calls himself!). The comics, written and illustrated by the character’s creator Dave Stevens, ran through out the 80’s and the character was resurrected last year by IDW Comics courtesy of a whole host of superstars in the comic industry (including John Cassaday, Mike Mignola, and many others).

It’s been awhile since I’ve seen The Rocketeer or read the comics, but I remember liking them a lot as a kid and now that I’m older I appreciate the “throwback” feel of them (Stevens was influenced by classic movie serials of the 1930’s, the most obvious being King of the Rocket Men). Disney’s attempt to reboot doesn’t necessarily have to be from the movie itself; there are other stories it can draw from, and as long as it retains Stevens’ movie serial vision, I’m all for it. And hell, maybe Johnston would give it another go in the director’s chair; he already made a throwback-style movie in last year’s Captain America: The First Avenger so it’s not like he’s lost the taste for it. But considering how obscenely early this news is, the speculation can wait. Let’s just sit back and see what Disney decides to do…while also going out and renting The Rocketeer from your local video store (or Netflix).

Do you want to see a new Rocketeer movie or is the 1991 one as good as it’ll ever get?