The Mitchells vs. the Machines Review: A Visually Imaginative, Tonally Discordant Animation 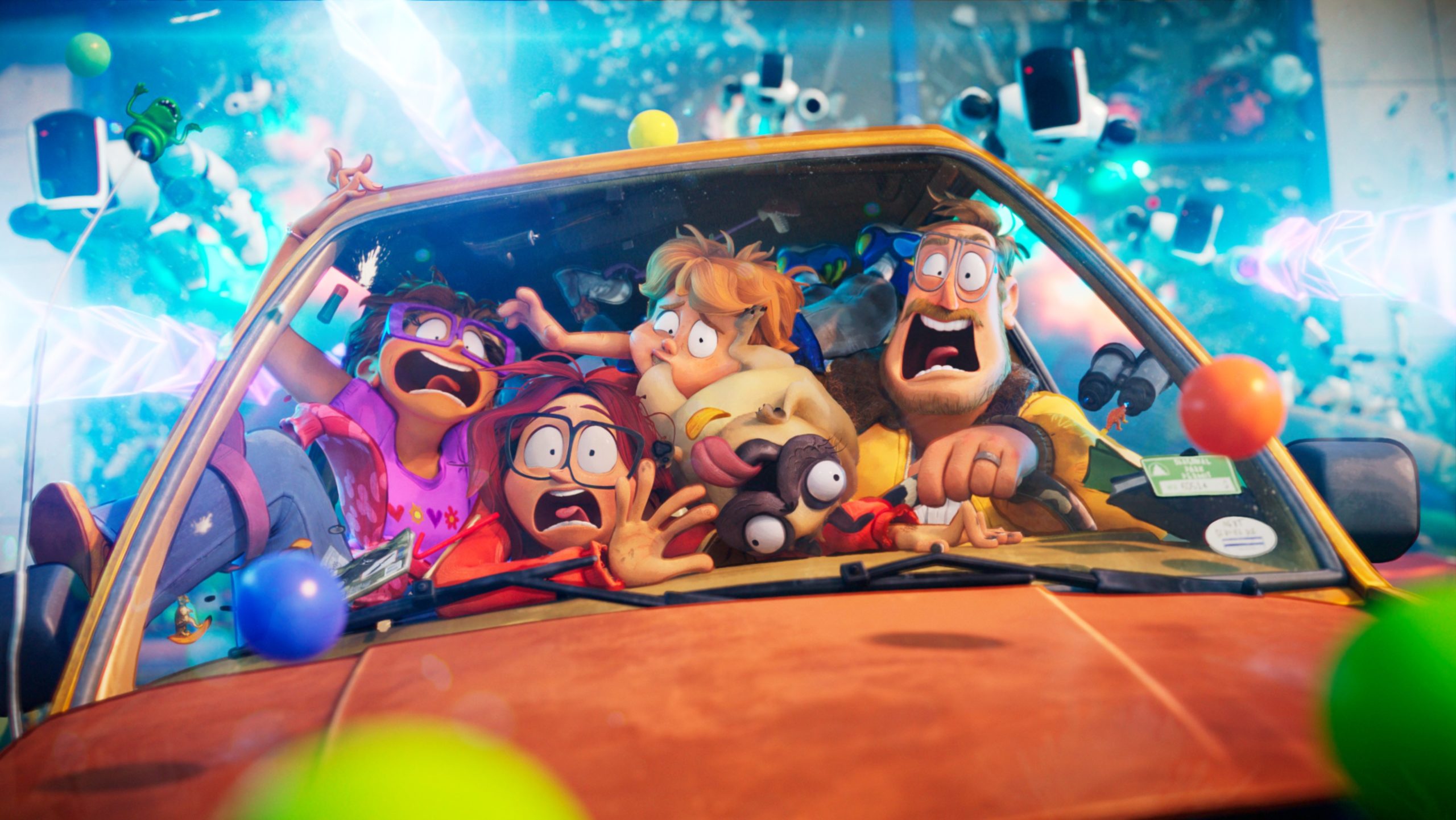 Often discerning the right tonal balance between crude humor, clever references to film culture at large, and the bonds that make friends and family strong, the Lord and Miller team have brought us gems like 21 Jump Street, The LEGO Movie, and Spider-Verse in the last decade. Making his feature directorial and writing debut with The Mitchells vs. the Machines, Michael Rianda attempts to enter this realm with the help of the production team, colorful cast, and stunning animation by way of robo-pocalypse but unfortunately just misses the mark. If only the film curtailed the crudeness and violence that would’ve otherwise suited an adult-themed cartoon.

The Mitchell family at the story’s center is a fun, friendly, and familiar group. Kate Mitchell (Abbi Jacobson) is an aspiring film director about to go away to college who feels out of step with her family, particularly her father Rick (Danny McBride) who’s often urged along by the eccentric mother Linda (Maya Rudolph) to make more of an effort. She draws inspiration from her Mt. Rushmore of directors that includes Lynne Ramsay, Greta Gerwig, Céline Sciamma, and Hal Ashby. The film constantly shows her DIY movies as a reminder of her creativity but also as a non-stop stream of images when she has a creative spark––tailor-suited for the generation of kids that grew up on YouTube. To go along with the animation, live-action footage is even employed to remind us these kids are constantly in the throes of visual stimulation. Rick also acts a not-so-subtle critique of new tech when he asks everyone to stare at him and not at their phones when he comes home from work. There’s a desire for father and daughter to bridge that generational divide and, at the heart, is the main conflict to be resolved.

Mitchells most succeeds when finding humor in the tech revolution happening in Silicon Valley. Eric Andre voices Mark, the boisterous CEO of “PAL”––a tech company who might as well be a surrogate for Amazon with the number of tech ventures they own and the population’s reliance on its products for their daily living. The plot gets off to an amusingly hilarious start when the AI (voiced by Olivia Colman) turns against Mark and turns off all of the WiFi that PAL owns. We then see cities across the world thrown into complete disorder and chaos as the robots Mark built descend on a human race dependent upon technology. As this is underway, the Mitchell family is thrust into the middle of the battle and must reconcile all familial differences while on their way to drop off Kate at college.

Combining the 2D animation and comic book-inspired visual effects of Spider-Verse with CGI that allows the explosive action elements to blend seamlessly into the background, the film is visually stunning and chock full of flare. When the robots finally take over, the monolithic vessel they build to ship off all of the people recalls the grim undertones of Blade Runner and the video-gameness of Tron with its neon-lit colors and bumping techno score. But it is the constant montaging of faux YouTube clips and title cutouts into dialogue that becomes exhausting––so much so it may fry some wires for those who aren’t used to an overabundance of visual stimuli, losing focus on the vivid color palette the animation offers.

Thematically, the narrative jumbles the grounded dual conflicts of both a family disjointed with information overload as well as the dangers of entrusting one corporation with a monopoly on society’s technological advancements. The broken dreams of parents acting as a caution to our hopes and pursuits is nothing new, but the plight of the wunderkind DIY director and the father failing to understand his child feels genuine. However, the film drowns out this thread with robot action and gleeful celebrations of violence, especially when we enter a third act that brings predictability and, at times, misplaced salvation. A violent upending for one of the robots offers a gruesome sight for a kids movie as we see blood splat on the character’s face, striking an uncomfortable chord not at all in touch with the film’s over-arching family tone.

Failing to reach the heights of other Lord and Miller productions, it becomes crystal clear the loony animation of The Mitchells vs. The Machines was never intended for kids and was originally conceived as an animation for adults, leaving a sour taste in as the credits roll. Lacking a precise balance of amiable entertainment and intense thrills, the director and producers fail to rein in violent fantasies that spoil what could’ve been a heartfelt and clever romp exploring family dysfunction.

The Mitchells vs. the Machines opens in theaters on April 23 and on Netflix on April 30.