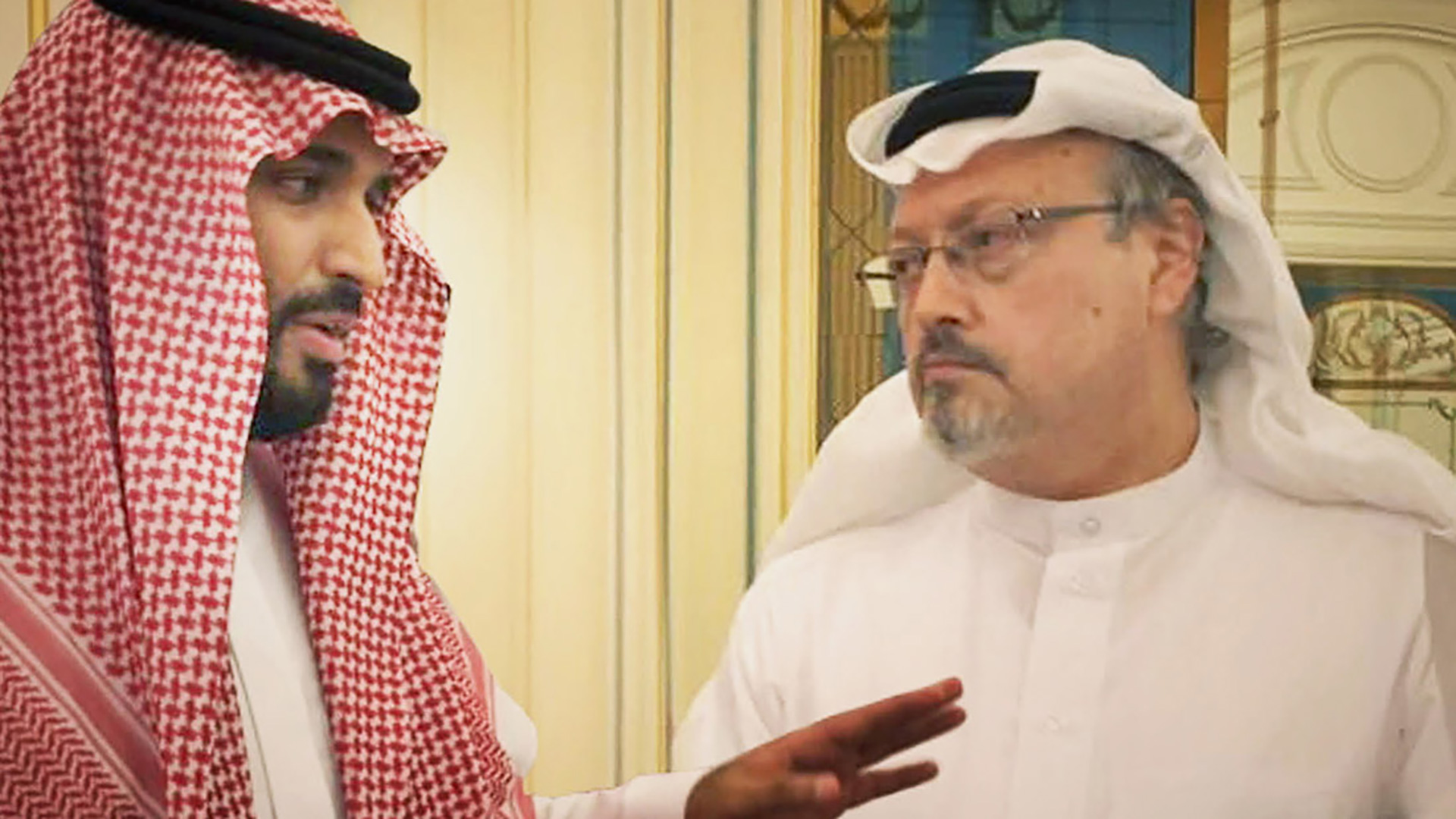 Saudi journalist Jamal Khashoggi was a known commodity in the world of international news so it was no surprise when word of his disappearance, presumed death, and confirmed assassination grabbed universal attention. So many questions swirled around the incident from its setting (his country’s consulate in Turkey), involvement of Saudi Crown Prince Mohammed bin Salman himself, and a seemingly global indifference towards achieving actual justice in lieu of kowtowing to the economic importance of a nation with seventeen percent of the Earth’s petroleum reserves. What should have sparked a galvanizing effort to sanction MBS and bolster our collective need to protect civil liberties like freedom of speech everywhere proved a tipping point that confirmed the opposite instead. MBS’s power has grown and fear of his retribution has worsened.

Director Bryan Fogel realizes this truth and knows a film about what happened cannot simply start and end with Khashoggi alone. That he—a man who gave up his home, family, and career to flee to America after watching friends and colleagues get arrested—could be dispatched with under false pretenses and in a foreign country like he was becomes a warning to those less famous and less connected that hiding isn’t an option. To therefore talk about the why and how of Khashoggi’s death is to include Saudi Arabia’s one hundred-year-old monarchy, MBS’s ambition, Twitter’s reach as a state-sanctioned propagandized weapon, high-tech surveillance that’s able to compromise the richest man in the world, and other out-spoken activist journalists rising to fill the huge void that’s been left.

So rather than merely compiling details and evidence of the days leading up to and following the murder, Fogel and co-writer Mark Monroe expand their focus and research much, much further. They had to ask, “Why Khashoggi?” and then work backwards to find an answer. Because even though the film is titled The Dissident, their subject never embraced that title. He had grown more vocal against Saudi Arabia in his work at The Washington Post, but he still loved his country and admitted some of MBS’s policy changes were positive even though his implementation of them wasn’t. So when did Khashoggi cross the line? And why did MBS need to remove him from the board so immediately that he’d ignite an international incident to do it?

Enter Omar Abdulaziz: a twenty-something, politically outspoken Saudi dissident who fled to Montreal, Canada and began to watch his social media reach increase exponentially as a result. Khashoggi saw what he was saying, reached out, and sparked a mentorship/collaborative relationship that proved mutually beneficially to them both. Where he could provide Omar journalistic knowledge and experience (Khashoggi was an insider after all, spending decades as a mouthpiece for the kingdom with an intimate grasp of the government before breaking free), Abdulaziz had the ear of other radical youths and the modern outsider perspective necessary to see how advanced MBS’s technological control of his citizens had become. The Arab Spring ultimately opened Khashoggi’s eyes and Abdulaziz subsequently provided him the tools to ensure they stayed that way.

The road to October 2, 2018 was set the moment they came together if it hadn’t already been before. So Fogel makes the conscious decision to keep the information he collects from the police investigation and Abdulaziz side by side, shifting from one to the other in ways that keep the audience on the edge of their seats as new revelations gradual come to the forefront. There’s the media’s progression from having to buy into what the Saudis were saying about Khashoggi to when the Turkish authorities later blew everything wide open. There’s Omar’s evolution as a revolutionary under Khashoggi’s wing while dealing with threats, coercion tactics, and blackmail on behalf of their homeland. And there’s Jamal’s parallel journey taking him further away from objective neutrality.

We hear taped conversations from Abdulaziz’s and Hatice Cengiz’s (Khashoggi’s fiancé) cellphones. We read the transcripts from inside the consulate that prove the assassination was planned and coordinated rather than the accidental result of a struggle. And we listen to Turkish investigators, UN rapporteurs, and former CIA members who begin putting pieces together while we re-watch Donald Trump’s pitiful cowardice insofar as his perpetual desire to hold a dictator’s word as truth despite irrefutable evidence to the contrary. All this gets us closer to the answers we seek while also opening doors to just how far-reaching the reverberations have gone via animated sequences detailing cyber warfare that places everyone at risk. Each time you think you know everything, Fogel throws in another wrinkle that’ll make your jaw drop.

And it all gels together perfectly for a fast-paced, poignant, and essential narrative despite The Dissident being so densely packed with exposition and peripheral context. Anyone who followed the twists and turns in real-time two years ago will be familiar with the circumstances surrounding the incident itself and the world’s refusal to respond since, but the insight provided into Saudi Arabia’s current regime and oppression as well as Khashoggi’s personal life and behind-the-scenes maneuverings with Abdulaziz make the film an invaluably and definitive account of the bigger picture. Because if MBS can get away with this in the open, just think what Russia, China, and even the United States are doing in the dark. The distance between Saudi internet troll farms and Trump’s “fake news” drumbeat is shrinking.

The Dissident opens in limited theaters on December 25 and hits VOD on January 8.