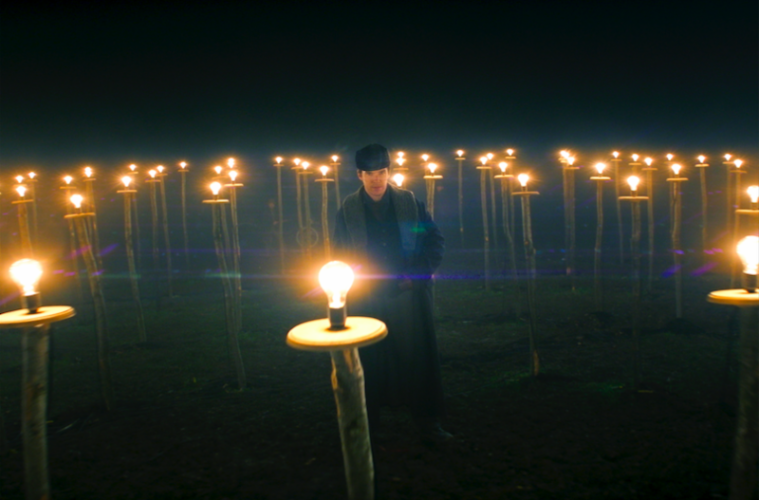 The tumultuous journey of Alfonso Gomez-Rejon’s The Current War–starring Benedict Cumberbatch, Michael Shannon, Katherine Waterston, Tom Holland, Tuppence Middleton, Matthew Macfadyen, and Nicholas Hoult–is looking for a happy end. The former Weinstein Company film premiered back at TIFF 2017, but has now been re-edited (reportedly adding five scenes yet cutting the film by 10 minutes) and picked up by the newly-formed 101 Studios. Ahead of an October release, a new trailer has arrived for the film, which tells the story of Edison, Westinghouse, and Tesla’s formation of our modern-day electrical system.

“I was getting the film back and had six to eight weeks and the chance to shoot one extra day. I was never more prepared for anything in my life,” the director told Deadline, also revealing he added a new score by Danny Bensi and Saunder Jurriaans. “A lot of actors needed to be there on one Saturday in December and they all stepped up. We had this farmhouse and one room was Tesla’s office, another was Edison’s bedroom, and on and on.”

Jared Mobarak said in our TIFF review, “The title is The Current War, but it’s subject is truly more history than battle. It’s flashier to think about our modern day electrical system as a conflict between two geniuses fighting for their vision’s victory, but the truth is more complex. Michael Mitnick’s script understands this (mostly) despite the title representing it. The way he documents the personal, professional, and public struggles experienced isn’t as much about letting the audience choose a winner as it is to represent facts for posterity’s sake. Whether the Chicago World Fair picked Thomas Edison’s (Benedict Cumberbatch) direct current (DC) or George Westinghouse’s (Michael Shannon) alternating current (AC) is moot when compared to the result. In the end no one truly lost this “war” because the world at-large ultimately won it together.”

Three brilliant visionaries set off in a charged battle for the future in The Current War, the epic story of the cutthroat competition that literally lit up the modern world. Benedict Cumberbatch is Thomas Edison, the celebrity inventor on the verge of bringing electricity to Manhattan with his radical new DC technology. On the eve of triumph, his plans are upended by charismatic businessman George Westinghouse (Michael Shannon), who believes he and his partner, the upstart genius Nikolai Tesla (Nicholas Hoult), have a superior idea for how to rapidly electrify America: with AC current. As Edison and Westinghouse grapple for who will power the nation, they spark one of the first and greatest corporate feuds in American history, establishing for future Titans of Industry the need to break all the rules.

The Current War opens on October 4.