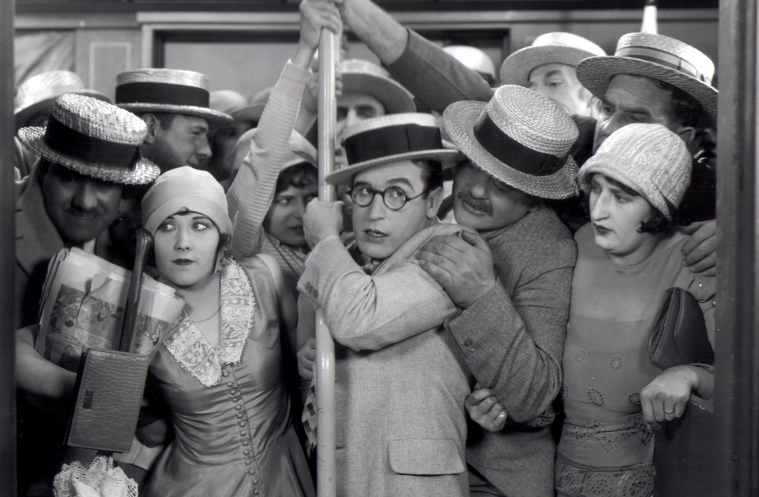 Harold Lloyd’s mastery of comic timing comes through his respect for environment. While other slapsticians bent reality into a joke, Lloyd’s joke is blending himself into the cruelty of reality. Speedy — his final silent feature — brought him to the streets of New York City to put his Glasses Character into the bustling metropolis, attempting to hold a job and save a fledgling horse-drawn trolley business from corporate conspiracy. Lloyd’s natural comic timing — less mannered than both Keaton and Chaplin — makes him just odd enough to pratfall around the streets with his one-track (or one-baseball diamond) mind, managing to be overly polite and overly clueless at the same time. When he attempts to get a trolley seat for his gal on a crowded car, it’s a mix of cleverness and dull-witted awareness that turns obvious solutions into amusing surprises.

Lloyd balances Speedy’s gags with both the fantastic and the realistic, relying on his character’s obliviousness to find himself in social situations part in the Manhattan and Brooklyn locales that become absurd through naturally logical causation. A date at Coney Island where a live crab slips into his pocket becomes both a horny pincher that shows the all-too-innocent Lloyd having to display a mix of awkward innocence and self-righteous anger, which only exacerbates situations into higher absurdities. A taxi cab gag shows Lloyd at his best when his inadvertent passenger turns out to be Babe Ruth, late for his game at Yankee Stadium. Beyond the fantastic driving stunt work, it’s Lloyd’s nervous nellie character that makes the sequence as he attempts to politely delight his customer while breaking every traffic law in existence. (Ruth shows a knack for the comedy of the scene, likely because it never requires his voice.) Lloyd escapes traffic cops and fights with Lower East Side mobs (featuring one of the truly great peg leg gags), and only prepares him for the horse-drawn trolly chase that climaxes the film — all the more thrilling for its location-based stunt work in which every little piece of construction becomes an obstacle. Lloyd turns his everyday personality into a conduit for blowing up the world into the extraordinary.

The title might recall Wyatt Earp’s legendary battle, previously memorialized in films by Allan Dwan and John Ford, but Joseph Newman’s CinemaScope take on the lawless Kansas town only mentions the legend in passing before he ever gets to Dodge. Instead, Gunfight at Dodge City follows Joel McCrea’s honorable outlaw as he finds his inadvertent way into the political sphere. The opening monologue sets up the wickedness of violence, as McCrea’s Bat Masterson visits one town to end up a (justified) murderer and on his way to Dodge where his marshal brother (Harry Lauter) battles a powerful sheriff (Don Haggerty) for order.

Its ’50s political allegory of violence and power feels rather standard, but Newman’s images give the film an unexpected life throughout its short, less-than-80-minute running time. The widescreen frame and Technicolor-images allow Newman to keep his camera rather tame amidst the chaos, preferring dynamic staging of actors across a frame with selective shadows to highlight their psychology. The film avoids excessive editing as Newman chooses his close-ups carefully, highlighting McCrea’s aging face as the wayward outlaw-turned-harbinger of order. Gunfight also gives texture to the two beauties in the film: preacher’s daughter Pauline Howard contrasted against saloon owner Nancy Gates, a power dynamic given a very welcome twist near its climax. A film that won’t bring any revelations to the Western myth but never sets itself out to do so, this is economic storytelling — always an underrated ethos of film production.

Speedy and Gunfight at Dodge City are now available on Blu-ray.