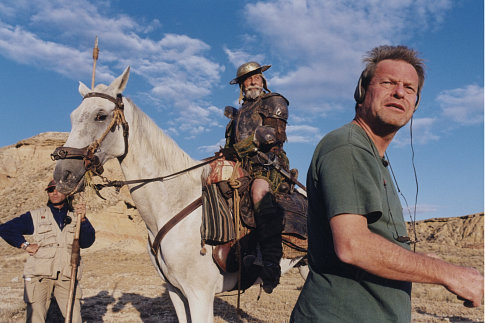 It was more than a year ago that tireless and quirky director Terry Gilliam unhappily admitted production had once again stalled on The Man Who Killed Don Quixote, his adaptation of Miguel de Cervantes’ classic novel. This was the latest in a litany of production complications that have lead many to speculate that Gilliam’s efforts here are cursed. After his first attempt was crushed by a series of catastrophes (detailed in the striking documentary Lost in La Mancha), the film was scrapped, then later recast and remounted. Instead of Jean Rochefort and Johnny Depp, the roles of the Lord of La Mancha and his loyal but dubious sidekick were to be played by Robert Duvall and Ewan McGregor. But in the midst of production, funding fell through again, leaving The Man Who Killed Don Quixote only partially shot once more. At the time, Gilliam made it clear he had no intention of giving up on his long-troubled production, saying:

“Don Quixote gives me something to look forward to, always.”

And so it is little surprise that while accepting the honor of the Fellini Foundation Prize in Italy last week, he told a pack of reporters that he is once again seeking funding for his Don Quixote interpretation that centers on a modern day man sucked into the fantasy-driven world of the seemingly delusional Don Quixote. Altarimini reports Gilliam hopes to shoot again as early as next spring. But whether this will be an entirely new production, or the intended completion of his Duvall-starred vehicle is currently unclear. As The Playlist notes, Gilliam has informed Empire Magazine that “There’s somebody new come along with a new bit of energy… a person who can get money.” This could infer yet another star has been brought in to play TMWKDQ’s central figure, or perhaps that a new producer has been brought on board. Yet, it’s hard too imagine what cast or crew addition could inspire investors at this point. Gilliam’s been trying to make this movie for ten years now, and its high costs and repeated failures have made it a notorious money pit as well as an eerily ironic quest on Gilliam’s part.

Will his alluded to yet elusive new collaborator prove to be the Sancho-styled partner-in-crime Gilliam needs to complete his long-desired dream project? That remains to be seen.

Do you think Gilliam will ever complete The Man Who Killed Don Quixote? Or is he just tilting at windmills?