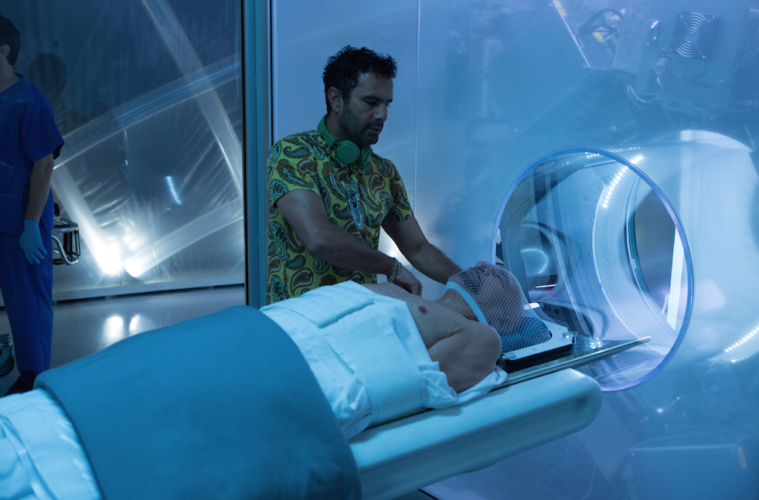 What if the world’s greatest minds could live beyond their bodies? Imagine what Steve Jobs or Albert Einstein could have accomplished with 50 more years of work under their belts. Such an enticing question is posited, more or less word for word, during Self/less, the new science-fiction thriller from Tarsem Singh.

I had the opportunity to speak with the director, who first came on my radar after viewing his breathtaking passion project The Fall in theaters. We discussed his experience with that film as it approaches its ten-year anniversary as well as the realism he embraced with his latest work, and much more. Check out the full conversation below.

The Film Stage: Although it’s a sci-fi film, there’s a realistic aspect to this movie where it feels like it could take place a few years from now. Was that aspect important to you?

Tarsem: It was. I’ve kind of always done heavily visual films which are fantastical. Unfortunately in the film world I’ve just ended up back to back to back to back, four movies that ended up being visual and fantastical. I felt if I don’t achieve it now, I’ll probably never get the chance later because my work is usually visual, even in the commercials I do. I thought I’d give it a whack and I just said I want a thriller that is not fantastical. I don’t think it takes place in the future. It’s basically today. It’s just something that happened that we’re not aware of. I just use that general element, but nowhere in the near future. All the technology that we use, that you see visually, the MRI machines and everything, is something we use. The technology there we know how it’s done. In a few decades, God knows what it’ll look like. Could it all get switched around? That’s happening today, but I just took the idea of if the consciousness could get changed. It’s grounded, but it’s cinematic. I wanted the realistic touches, but I wanted to shoot it cinematically.

You’ve worked with Robert Duffy editing most of your films. You do it a lot in the movie where you condense a lot of time with different montage sections and other editing techniques. Specifically with the jazz section.

Yeah, for me I just think he’s the greatest editor there is. He’s phenomenal and has a sense of pacing. Montages can be the most dullest things usually, by showing time pass. I just thought if you’re showing somebody someone having a good time or time passes and you can’t really make it look right, I think it kills a person like me. I think the music pieces, I could’ve changed a few, but right now I think all the New Orleans and all that I put in, I like how it is. I recorded it on the street with local musicians and then just gave that to them.

It gives great energy to the movie.

It’s unfortunate because in the trailer it looks much more like hip-hop party scenes. In the movie, it’s more like the New Orleans music scene.

This is a modestly budgeted original sci-fi movie opening in the middle of summer, which is exciting for someone that is maybe tired of a superhero or a sequel movie. Were you happy with the release date?

Well, for me, I have so little to do with that. I just directed the movie and the people that put money into [do that]. So it isn’t a personal thing. With The Fall, it was all my decision. It turned out that the movie was much more… people find it commercial and so they changed it. In the testing of the audience they found it a much more accessible movie. They looked at the numbers and they reviewed it again and again and again and consistently it was in the cards. They just said, “OK, we’ve got to get a bigger audience for this.” So they moved it into the summer. Unfortunately you can get lost in big movies in the summer, but when you add it up in the end, it does make them more money. They are releasing it more theaters and everything and I said, “Yep, that’s good to me.” So I’m not at war with that. I trust the people who are invested in the movie to get their money and if it goes into more theaters, the happier I am.

I do want to ask, it’ll be ten years soon since The Fall was released and that was a movie that blew my mind when I saw it in theaters. It was a certainly a big passion project for you. Looking back ten years ago, what are your thoughts when you reflect on the project?

[Laughs] When my brother asked me how much I think the movie cost, I told him for ten years I wasn’t going to go into the numbers so I didn’t have to sit down and feel bad about the project. At that particular time I just knew that if I didn’t get that movie done we would just be a bunch of guys that had money in the bank and we’d always think about the movie we wanted to make. We either make it right now or we don’t. It literally was at the correct time at the correct place and I had to make it. It took close to seventeen years of location scouting and looking at stuff and having the ideas and finding the people. That kind of project doesn’t happen everyday. Maybe you have a couple of them in you. Of course, when we released it after we made the movie, no one wanted the movie. So then I had to work for more money, put another two years of work in to put it in theaters myself and then people like you saw it. Still, it’s a very, very polarizing film. It either blows people’s minds or it’s a very big wank for them. Right now, on the Tomatometer it isn’t even a recommended movie. So that’s the kind of definition of cult. It’s a polarizing film. You love it or you hate it and I’m OK with both. It’s the middle I’m terrified of.

Jumping from that you worked like crazy with Mirror, Mirror and Immortals virtually back-to-back. Was that experience eye-opening for you to juggle both of those movies?

The thing was after The Fall I ended up having the reaction Coppola had when he came back from Apocalypse Now. He was so much on the road that he said the next movie was all on stage. So I shot The Fall in 28 countries and when I came back, I said, “Right, next movie nothing shot outside a stage.” Because The Fall doesn’t have a thing shot in a stage. Everything was done outside. So I back-to-back I did them and after that I went back to saying, “I need some real places to shoot in.” [For The Fall] I had a long time to design those things and you have children and things change. Right now I would like to do one more non-fantastical film before I go back into that territory. Some people say this one doesn’t look like my movies, but I go, “Well, you haven’t seen my ads. I’m all over the place.” If I didn’t do this movie, in five to six years if I’m still working in this now and people won’t give me a good script if it’s not in my wheelhouse. They just think, if it’s fantastical, give it to him. So I’m trying to get things that are a little bit more conventional, but not fantastical. I’d like to do stuff that’s cinematic, but not fantastical.

You’ve mentioned how you were inspired by early Polanski thrillers for this movie. Could you talk about the ones that left a big impression?

Yeah. I think there’s something in the Polish water. Kieslowski, Polanski, those guys, when they shoot something, you know that the decision was made while shooting. It wasn’t found in the editing room with ten cameras and given to the editor. It has a voice right from the very beginning when it was blocked. I love that. When I was looking for things, I wanted a commercial version of the kind of thrillers that Polanski made. I’m the person. That’s where my DNA came from. I love those movies, because I look at that and he does a movie about the devil or he does a movie about cops or whatever, you can just see his DNA on everything.

My very last question is in the film, Matthew Goode says with this technology someone like Steve Jobs or Albert Einstein could live another 50 years. If you could see someone live for 50 years, is there anyone that comes to mind?

Darwin? Well, that goes back to The Fall.

Yes. [Laughs] The guy who just made sense of the universe for us.