SXSW Review: The Donut King is a Lively and Moving Look at a Little-Known L.A. Legend 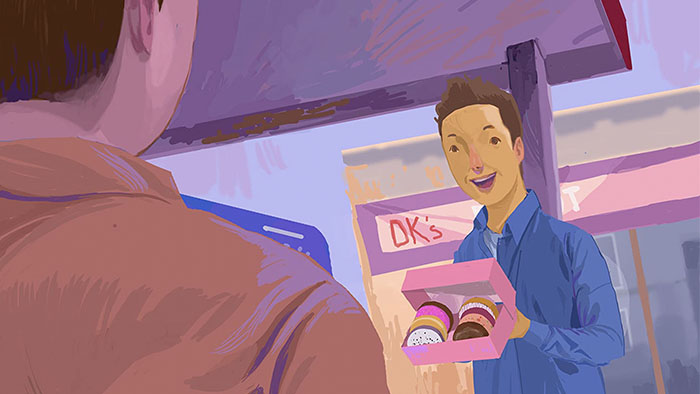 Alice Gu’s moving documentary The Donut King isn’t just a sugary concoction. Although the documentary has its sweet moments, it’s a rather nuanced and often heartbreaking tale of Ted Ngoy, a Cambodian refugee who escaped to southern California in 1975 and through hard work and dedication built a donut empire. Affectionately known as “Uncle Ted,” the 77-year-old entrepreneur was originally a major in the Cambodian army and made the difficult decision to escape just as the Khmer Rouge led a bloody revolution. He and wife Chrissy land in LA, working odd jobs nearly 24 hours a day until he stumbles into a donut shop and falls in love with a taste that reminds him of home. Determined to get into the business he takes a job at the fast-growing Winchell’s chain which grew alongside car culture, interstates, and urban sprawl in the 1950s as two donuts and a coffee became a breakfast staple for those commuting downtown to the office.

In 1976, Chrissy and Ted open their first shop which leads in short order to 25 more, all leased to Cambodian refugees Ted has sponsored–each with their own harrowing tales of escaping the Khmer Rouge. Alice Gu fascinatingly jumps between multiple stories and time frames, profiling the effect that the mythic Uncle Ted had on various family-owned shops in southern California, subverting the expectation that, despite its colorful opening, this picture would be a celebration of culinary culture. While that is explored, we also get a compelling, often heartbreaking character study that does not shy away from the dark side and the hard work of running an empire.

Ted sponsors over 100 families, growing his company from a frugal trainee looking to cut corners at Winchell’s to 65 donut shops and twenty million dollars in annual revenue. He also finds himself embraced by the likes Republican politicians like Ronald Reagan and Pete Wilson, both of whom the Ngoy family held up as examples of the hardworking American spirit. Ironically, future governor Jerry Brown, a Democrat, had been vocally against bringing refugees to California.

After the sugar high, the story takes an unpleasant turn as greed, money, and excitement threaten to bring down Ted in a truly heartbreaking way that is best left unspoiled. Gu offers a comprehensive and riveting look at a group of entrepreneurial families that keep his legacy alive while pushing the culinary culture further. They together are able to stave off a second attempt by Dunkin’ to enter the market as younger family members play the social media game and create new Instagram-worthy offerings that capture the attention of food blogs like Thrillist.

The Donut King is told through archival footage, animation, and interviews with family members alongside Ted Ngoy, who has tried to make peace with those who he’s hurt including Mel Allison, a 91-year-old baker still at it at Winchell’s. The result is a moving and lively portrait of multiple family businesses and the man that envisioned and executed a delectable kingdom of confections.

The Donut King had been slated to premiere at SXSW and has been awarded the Special Jury Prize for Achievement in Documentary Storytelling.