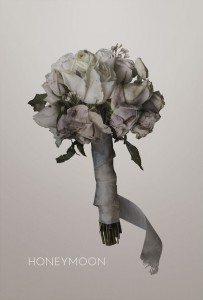 Honeymoon is a kind of Trojan horse; going in cold and not knowing that its playing in the “Midnighters” section of SXSW, you’d think you were in just another festival drama about 20-something hipsters venturing into the woods to discover themselves and something new about their relationship, family, etc. — it is that, and a great deal more. Initially we’re confronted with talking heads of our couple explaining a disastrous first date over Indian food in Brooklyn.

Bea (Rose Leslie) and Paul (Harry Treadaway) marry and retreat northwards to Canada, specifically to her parents’ remote cabin in the woods. Much of the first act remains in that natural social realism mode; they go hiking, they go sailing, they have sex. It’s all quite playful despite the fact we know little about these characters, but we later find out through a sinister device there might be more to this than what meets the eye. Writer/director Leigh Janiak has made a rather difficult film to talk about, however, as you’ve arrived at a review, perhaps before you’ve seen the film, you clearly don’t want to go in cold. Janiak’s sensibilities in the first act, perhaps the least interesting portion of the film, remains restrained with only a few hints that things aren’t what they seem to be. Returning to the primal, or in the case of this story, a landscape of importance, proves to unlock psychological instincts that are not as well-drawn as they should be.

As a horror film, Honeymoon is a rare intellectual work. Aware of and actively working to subvert the gender codes typically associated with horror (as noted by film theorist Robin Wood), it arrives at a whole different rational than Lars Van Trier’s similar Antichrist. Satisfying and mystifying, Honeymoon almost gets away with it, although I do wish the mythology it builds towards in its third act was a little more fleshed out. Running off the rails, it almost treads into the territory of less sophisticated horror films like Devil’s Due.

Equal parts fascinating and frustrating, with an awful lot more than it lets on, a fatal flaw is perhaps screening the film in the “Midnighters” line-up. Going in cold you expect a certain kind of relationship drama, like Adele Romanski’s Leave Me Like You Found Me (from SXSW 2012). While the leads, Leslie and Treadway, are likable, they could use a little more development in the first act. This criticism is later resolved for Bea, but I suppose Paul is simply dull.

Honeymoon is a promising debut feature from Janiak, effectively and ambitiously mixing the alien and the familiar within the domestic sphere. Certain elements feel underdeveloped, although I admire the restraint employed by this newcomer helmer; as an original and smart voice, I look forward to what she’ll do next.

Honeymoon premiered at SXSW 2014. Watch the trailer above.