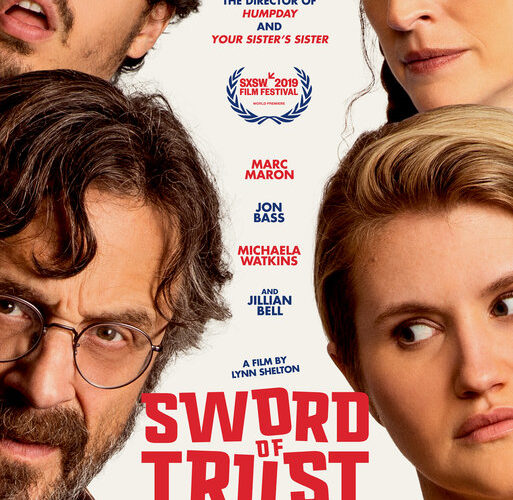 ‘Sword of Trust’ Review: A Curio of Eccentrics Get in Over Their Heads in Lynn Shelton’s Absurd Journey

There’s a point in Lynn Shelton’s Sword of Trust where the four principal characters are being led into a situation with as much chance of ending in their death as it does the payment of forty thousand dollars. Sitting there in that moment of uncertainty without any bearing as to where they were or where they were going, Mel (Marc Maron) can’t help but smile and revel in the fact that he’s about to see something so wild he can’t wrap his head around it being true. He’s going to see a bunch of people who have warped their minds to the point of believing the Confederate army actually won the Civil War. The answer to “How can people think like this?” would soon be his either way.

I’m not saying he thinks the answer is worth dying for, but that excitement and anticipation of receiving it is enough to push any sense of dread to the side. Because it was one thing to have two women (Jillian Bell’s Cynthia and Michaela Watkins’ Mary) show up in his pawn with the former’s grandfather’s sword and a jumbled mess of a story declaring it the weapon by which General Sherman-Sheridan surrendered the Union army, but a complete other when discovering people with real money would buy it. It doesn’t therefore matter that he, his employee Nathaniel (Jon Bass), and the women all think it’s a crock of lies woven by a dementia-riddled brain because the organization they call to make a deal holds it as historical truth. Therein lies the beauty to what Shelton and co-writer Michael Patrick O’Brien have made. Four opportunists who think of themselves smarter than they perhaps are join forces to fleece a bunch of idiots (dangerous or not) for something that is real but not real. The quartet has to size each other up with a welcome dose of dry sarcasm, coax the buyer’s (Dan Bakkedahl) right-hand man Hog Jaws (Toby Huss) into acknowledging its place in his revisionist delusion, and fight off two hillbillies (Whitmer Thomas’ Jake and Timothy Paul’s Zeke) trying to steal it from them. It’s an absurd situation that grows more surreal as the minutes tick away because the level of intrigue Mel and company possess can’t help outweigh their trepidation in dealing with racist monsters.

To top it all off, however, is the realization that this conceit is but a reason to put them together: a crotchety fifty-year-old turned hardened and cynical through regret and sorrow (Mel), a doltish conspiracy nut with a child-like innocence (Nathaniel), a steely-eyed pragmatist you don’t want to mess with (Mary), and her nostalgically pure-hearted wife (Cynthia). We learn about the casualties and surprises love creates by listening to them open up about whom they are to each other and what led them to this moment of seeming insanity to recognize their humanity and the relatable curiosity we share with their plight. And Shelton never tries to construct some grand finale when they’ve proven themselves to be the type who’d simply go right back to their lives.

That last part is key because relatability allows us to accept their incredulity and frustrations as well as the enjoyable few coincidences that crop up along the way. We know what Cynthia and Mary are going through as they attempt to con a con man without the confidence to do so with a straight face. We know Mel’s exasperation even more because who hasn’t been stuck inside a scenario they wish they could just cut short without the bullshit and hash out common ground? Nathaniel is thus the outsider that keeps them honest—the goof whose hand you have to hold to keep him on track that’s too sweet, simple, and marginally useful to throwaway. This ordeal found them after all. They’re merely trying to make the best of it.

Throw in a couple side characters (Al Elliott’s Jimmy from across the street with as much wisdom as gun power when it comes to saving Mel’s bacon and Shelton as the pawnshop owners’ former love Deidre with a bigger emotional role—albeit second-hand—than you might expect) and Sword of Trust proves an enjoyable curio of eccentrics getting themselves in way over their heads. It’s dialogue-heavy (hearing it was largely improvised wouldn’t surprise) and hinges on wild moments of spontaneity born from nobody having the full story because no full story exists when it comes to historical inaccuracies. They can falsify the origins of this sword fifty different ways and it won’t matter because it’s all about belief. If the redneck wants it to be true, it is.

There’s a lot to be said about the way legends are created and the prevalence of internet-based misinformation being shared as fact until public consciousness refuses to believe actual facts, but much of this is left in the background to infer upon motivations rather than define plot. I really enjoyed how these regular people find themselves capitalizing on that communal ignorance as a means to get rich because why shouldn’t they? Why just sit and laugh at those who truly believe the world is flat or that the South won when you can use their ill-gotten tenacity against them? It’s tantalizing to watch idiots double down on their stupidity even if diminishing their capacity to do harm is misguided. Sacha Baron Cohen has made a career of it.

And as someone who’s not familiar with Maron, I found him very good in this role. He toes the line between smartest man in the room with what he knows and absolute novice with what he doesn’t (made worse by Bass’ Nathaniel being the one to help navigate the latter). There’s some range when it comes to dealing with the chaos and dealing with the complexity of his relationship with Deidre too. But for my money it’s Mary and Cynthia who steal the show with a lively banter and opposites attract synergy. Watkins is doing a variation on the same type of character she usually performs while Bell deftly moves beyond the blank stares she’s known for in Workaholics to define a three-dimensional person prone to absent-minded distraction.

Sword of Trust opens in NYC on July 12 before expanding and hitting VOD on July 19.