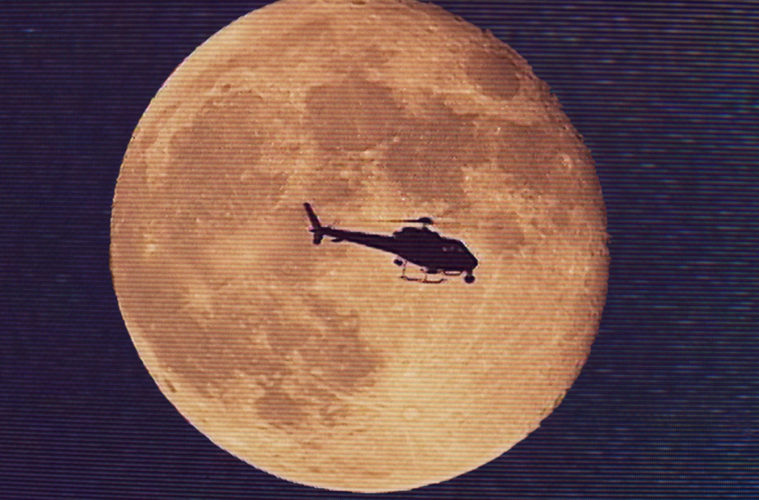 “Oh! Oh! Oh!” a voice keeps screaming. There’s a man flowing from a side channel into a main canal during a flood, and he breaks past a wall of white rapids. Now he’s floating away as a rescuer catches up to him, and during this matter of life or death, the narration continues: “30 feet! 20 feet! 10 feet! Five feet!” The rescuer grabs him by the torso, and the static rises: “And he’s got him!”

The voice belongs to a person who at the time identified as Bob Tur, founder of Los Angeles News Service. He was as ambitious as he was reviled; a real-life caricature of a newscaster on the field and a family man at home. Well, he tried to be both. He met his wife, Marika Gerrard, in the late ‘70s while she worked at a movie theater in Westwood. He asked her on a date and they went on one—to film stab victims in LA’s Skid Row.

As fate would have it, she kind of loved it: the adrenaline, visiting what she hadn’t seen, and being able to play it back. The pair ended up pregnant and getting married around when they founded LANS, and while their careers flourished, it became more of a game of how magnetic of material he could get on TV. Then he dropped $50,000 on a helicopter, something Marika was surprisingly accepting of. All of a sudden he was able to get way more: the Rodney King riots, the O.J. Simpson chase, and, hell, a view into Simpson’s house through his skylights.

Live TV journalism was in its infancy for a majority of their rise. Maybe that has something to do with the truth that Bob didn’t take long to dehumanize and even exploit tragedies while Marika often made excuses for herself. “When you’re seeing something through a viewfinder, it’s like you’re not really there,” she says in one of her talking heads. And while she sat hanging out of the chopper filming police shootings and as he commentated, millions of viewers sat even more detached.

It’s curious to see something like Whirlybird in a time when traditional television use is 1.) on the decline and 2.) retroactively looked as a precursor to today’s voyeurism. Director Matt Yoka frames the archive footage almost as a precursor to salacious reality TV trash. And there’s a lot of the footage, given how obsessively Bob documented his personal life. (He would have been a great dad vlogger.) Thankfully, Yoka doesn’t just use it just for the sake of humanizing his subjects; he plants the seed, then watches it rot.

Whirlybird works in part thanks to its ability to establish a sense of nostalgia. The advertising iconography of the ‘80s and ‘90s bleeds into the near-fetishization of analog technology and the conflation of the two with domesticity is almost playful in its intent. Even the score, while effective in its own right, has the sax-and-bass feeling of an early ‘90s docudrama. This, however, is only the tip of the iceberg. As Bob grows resistant to the high of catching a new story, he turns to seedier and seedier ways of presenting the world.

It’s here that Yoka’s film finds what might be its biggest plus. It never lets Bob off the hook. His perfection turns to snobbery and subsequently verbal abuse, and as their all-white bliss watches racial tension from the sidelines, the movie checks his racism. Part of it is inherent and part is verbalized, but so goes the disintegration of Bob and Marika’s relationship.

“The worst thing about working with your husband is that you can’t go home and complain about your boss,” Marika says, this time in the archive footage. This irascibility runs through most of their arc, but it’s around the 75-minute mark when it takes a forefront. It’s a nice change of pace and helps expand upon the pathos, but it’s also where Whirlybird takes its biggest swing and miss.

Who used to identify as Bob, as it turns out, now identifies as Zoey and fully transitioned in 2014. The interviewees make mention of it throughout and refer the newscaster pre-transition with male pronouns and post- with female pronouns. And while Yoka lets Zoey tell her own story, the context conflates her gender identity with her worst impulses: the points when Bob was abusive, exploitative, and impossible to please.

The movie makes mentions of toxic masculinity only to imply that gender identity is a result of some unresolved trauma or insecurity, and while it’s shortsighted from a thematic perspective, it also lacks the self-awareness to extend the issue to anyone aside from Zoey. There’s a swath of topics that could be extrapolated here, but from a Whirly-specific perspective, it feels like something Yoka stumbled onto and didn’t know how to deal with. Otherwise, it’s a documentary in turns exciting and upsetting, and as a comment on voyeurism, it doesn’t contradict itself.