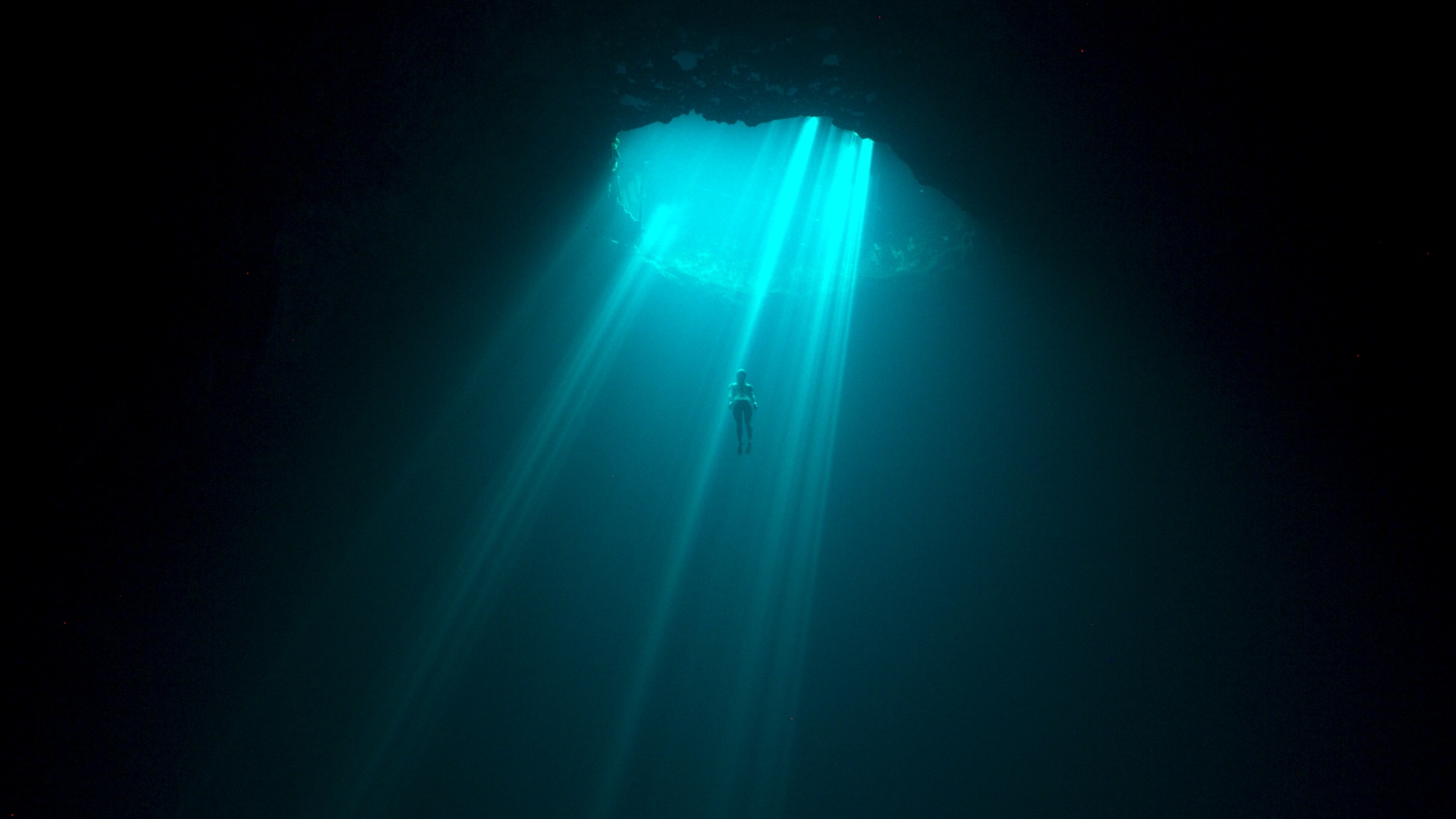 From the very beginning of The Deepest Breath, you know exactly what kind of documentary you’re in for. In the back of a car, director Laura McGann aims her camera at free-diver Alessia Zecchini and asks her a loaded question: “How do you think about death?” As you’ll later find out, Zecchini is in the midst of a global competition to swim deeper in one breath than anyone has ever done before. But the question is valid––especially when McGann cuts to the serene, crystal-blue footage of Zecchini paddling into the depths of the ocean. The camera follows her descent and subsequent sprint to the surface, where her brain loses function right before breaching; her eyes roll back while safety instructors begin performing CPR. “I’m not afraid of death,” she answers. When she regains consciousness, ready to dive again, you believe her.

It might be impossible to understand what compels divers to risk their life competing in abyssal environments that squeeze their lungs and cut off circulation, but McGann commits to at least capturing free-diving’s startling beauty and terrifying consequences as a starting point. Like Free Solo and last year’s Sundance hit Fire of Love, The Deepest State continues a recent trend of examining extreme athletes and professions that accept the occupational hazards of their unrelenting quests to chase the unfathomable. In this specific aquatic community, blackouts have almost become a rite of passage, and safety instructors––pushing lifeless bodies to the water’s edge and affixing oxygen masks to rejuvenate them––might as well be superheroes. These life-and-death passages make The Deepest State a gripping viewing experience, even as the documentary relies on a disappointing late twist, a likely effort to create suspense that wasn’t ever needed in the first place. Based on the morose way specific family members and friends describe the lives and personalities of the documentary’s dual free-diving portraits––Zecchini and Stephen Keenan, her safety instructor––it’s safe to assume not everyone highlighted in this documentary will return to the surface.

McGann spends the first half of this documentary chronicling the pair’s young ambitions and careers. Zecchini grew up fascinated by the water and obsessed with Natalia Molchanova, the record-breaking, legendary Russian free-diver. Keenan’s path to the water began later, after his inner-explorer took him to Dahab, a notorious free-diving destination that boasts the Blue Hole, a deadly underwater arch described as “more dangerous than Mt. Everest.” After breaking Irish free-diving records, Keenan stayed in the water as a safety instructor, where his and Zecchini’s paths would eventually cross and put them on a collision course for Vertical Blue, the international competition where Zecchini hopes to break the freediving world record of 101 meters and outlast a stingy opponent.

Once the background information is dispensed, McGann and cinematographer Tim Cragg attempt recreating the immersive experiences of sucking in air and sinking into darkness. Luckily, they have numerous camera angles and footage to edit from other divers and safety instructors, monitoring each diver’s progress and perilous final seconds as they head for safety. Throughout the grueling circuit, Zecchini reaches a point where she doesn’t reach the surface without blacking out on three consecutive attempts, which prompts medical staff to caution against any water activity for a couple days. Her frustration is so great she responds by immediately swimming laps across the Bahamian blue water.

It’s a blistering build-up to the finale, but will the movie (which was acquired by Netflix and is being distributed by A24) hold viewers’ attention enough so they won’t peek ahead and learn the fates of its two subjects? That’s what McGann is banking on, though it’s a morally murky bet. Perhaps inaccessible based on the circumstances, Zecchini and Keenan’s romantic relationship lacks illumination and depth. And in the midst of the free-diver’s record-setting journey and their fate together, the narrative manipulation is the only thing clouding an otherwise crystal-clear dip into sublime terror.

The Deepest Breath premiered at the 2023 Sundance Film Festival and will be released by A24 and Netflix.