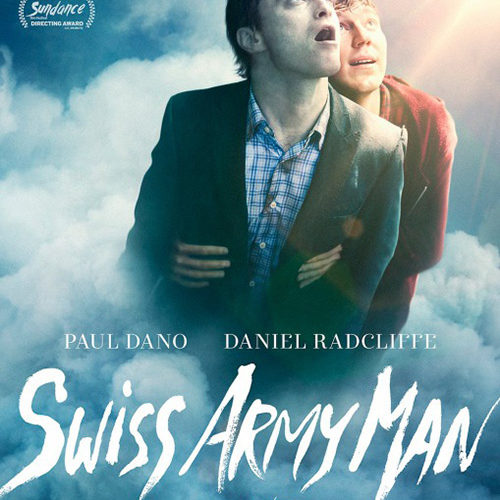 The leap from short-form filmmaking to feature can be rife with pitfalls. A reliance on the flashy style that was the foundation of a music video or commercial can quickly run dry, particularly if there isn’t a strong script to support the endeavor. Daniel Scheinert and Daniel Kwan (or DANIELS, as officially credited) have made the jump with Swiss Army Man, an inventive, wild piece of filmmaking that one will either be sold on by the premise or turn away quickly. As described by the directors it follows “a suicidal man who has to convince a dead body that life’s worth living.”

With more context, we find Hank (Paul Dano) on a remote island by himself after a boating trip stranded him. Seconds away from ending this desolate existence by hanging himself, he spots a washed up body on the beach, “played” by Daniel Radcliffe. From one literal glance at the title, there’s certainly more to his character, and much of the peculiar enjoyment is watching this bizarre evolution. Without spoiling anything before the title pops on the screen, the corpse begins farting akin to a boat motor and Dano’s character realizes he can use this to his advantage. Riding Radcliffe’s farting corpse like a jetski, they set off into the distance on an adventure quite unlike anything I’ve ever seen.

This set-up could easily make for one of the silliest, off-putting films that has ever graced Sundance — in U.S. Dramatic competition, no less — yet the directing duo bring an unexpected layer of emotion to the story, even if it ends up getting eventually repetitively muddled. As Hank and “Manny,” as Radcliffe’s corpse is later dubbed, progress on their journey, themes of loneliness, isolation, true love, and more emerge.

To help Manny learn about these harsh truths of life, Hank guides him along a journey of self-discovery filled with elaborate homespun creations that wouldn’t be out of place in the best work of Michel Gondry, backed by an uplifting score by Andy Hull and Robert McDowell. Hank and Manny’s guiding light home — aside from the erection of a corpse — is a single alluring photo on Hanks’ soon-to-be-dying cell phone of a woman (Mary Elizabeth Winstead). Their relationship builds as she heavily figures in, and these montage-heavy sequences of wonder ramp up, but the directors start to lose their way.

While these creations, from a bus in the trees to an ornate cafe, never lose their luster, there’s a repetitive nature to the build-up of the montages, as if each sequence is its own small music video, not quite a surprise considering their background. In the last third, as fantastical elements start to fall to the wayside and certain revelations are uncovered, much of the momentum shifts to a standstill.

The jokes that made up much of the first half are (perhaps intentionally) not funny any more, which would be all well and good if the finale landed with more impact. Shifting to more psychological territory, one wishes the flashbacks and repetition weren’t used as a crutch for delving deeper into what makes Hank tick.

A “fart drama” — as coined by the directors themselves — to end all fart dramas, Swiss Army Man is an exceptionally unusual, one-of-a-kind achievement, worthy to seek out for that factor alone. However, if as much time was spent on refining the script as was the world-building, this could have been a magical realism fever dream like few others.

Swiss Army Man premiered at the 2016 Sundance Film Festival and opens on June 24.