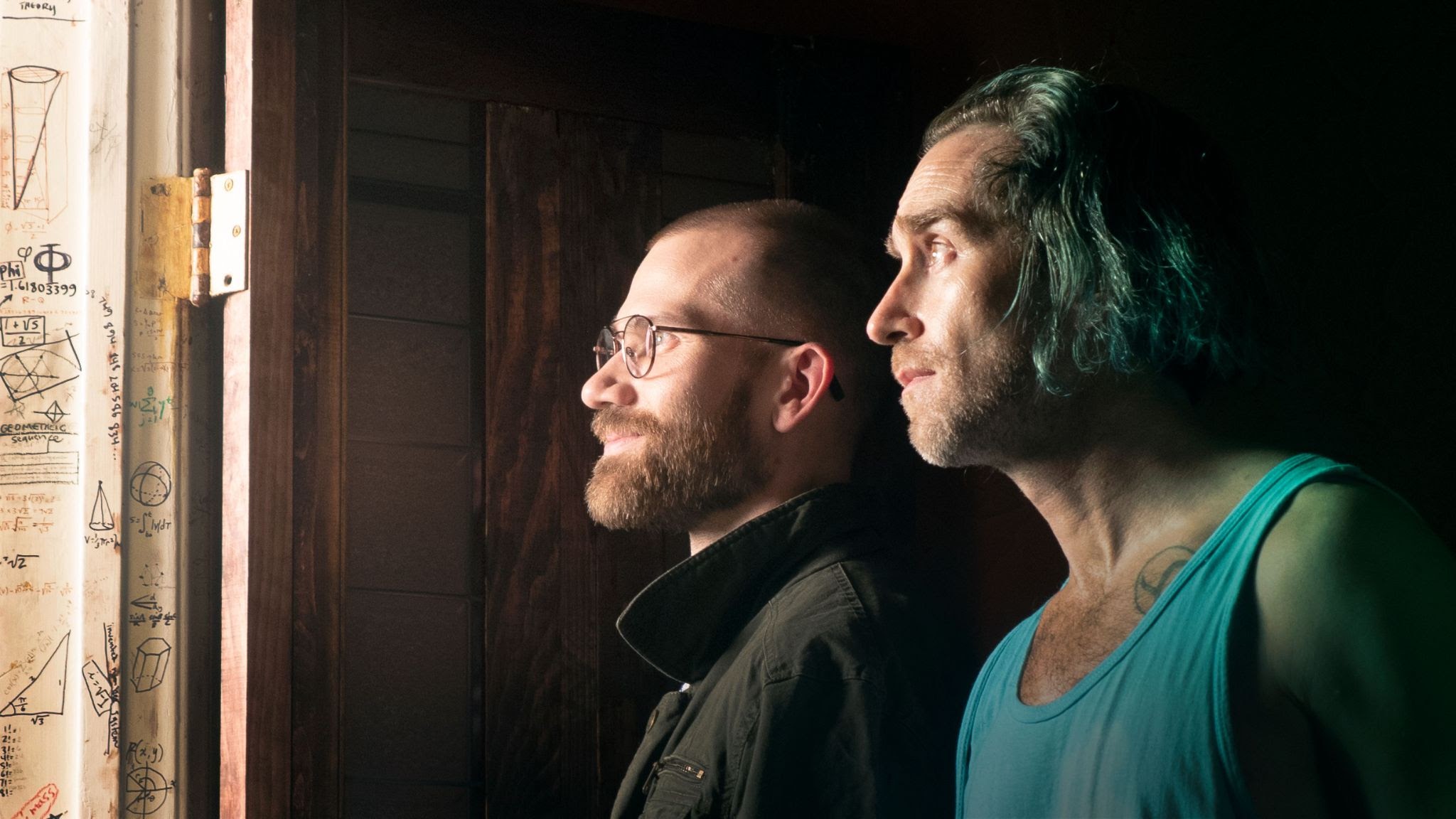 The characters in Justin Benson and Aaron Moorhead’s films shouldn’t be in these situations. They’re out of their depth, caught up on a conspiracy, a cult, or an idea that’s far beyond their grasp. Something in the Dirt doesn’t change that narrative, instead doubling down on the absurd, conspiratorial situations that the filmmakers create, only for their lead actors to be swallowed up by the bigness of what they uncover. Once again using the DIY model, Benson and Moorhead co-direct and co-star in their newest human science-fiction adventure, playing two Los Angeles dudes who interact with a floating crystal.

John (Moorhead) and Levi (Benson) reside in the same apartment complex, brought together by a severe lack of action in their lives. Once they start to experience odd, supernatural happenings, most of which surrounding the aforementioned floating rock, they grab all of the video equipment they can to begin filming a documentary. Framed by another documentary set in the future, Something in the Dirt becomes a late-night obsessives’ dream, a sometimes-unintelligible deep dive into the subconscious of two men who are grasping at importance. They want something big and weird and wild to happen, and so it does.

Using archival footage, home videos, and a plethora of different cameras with shifting quality, the indie wonder boys, with an ever-increasing base of supporters, make another lo-fi mindfuck, a psychological journey that can only happen when there’s nothing else to do. It’s a shaggy film, like its conspiracy-focused documentarians and their no-lease apartments. The duo find their footing in the middle-of-the-night moments, with lonesome characters missing any form of stable companionship. Outside of 2014’s sci-fi romance Spring, the directors make buddy comedies, exploring the ground beneath male friendships. The ground is built of fallible interests, though, constructing adult male relationships that are shaky, at best, lasting due to survival rather than fondness.

Like The Endless, the pair inhabit nearly every role in the filmmaking process, jumping from behind to in front of the camera in this shifting story of reality. They easily occupy the space of two LA burnouts, guys who need friends, at least to amplify the crazy thoughts crossing their collective minds. Their low-budget project, a dip in funding from the bigger Synchronic, doesn’t sacrifice the aesthetic or mood within every Benson and Moorhead film. With Benson acting as pseudo-writer and Moorhead as pseudo-cinematographer, the two have found a formula that consistently works, a commitment to crafting personal science fiction dramas or whatever obsession they have at any current moment.

If you aren’t willing to hop onto Benson and Moorhead’s wavelength at the beginning, it becomes more difficult to connect with their pursuit and their friendship, both seemingly born out of boredom. With monologues about scientific theories, quantum physics, and the definitive existence of other dimensions, Benson and Moorhead want to bring the audience on this goose chase. They want you to question what’s real, what’s fake, and what’s plain nonsense. Using practical effects, the movie is a little bit of all three.

It builds to an ultimately obvious conclusion, even if the path can be perplexing. It’s easy to get knocked off the winding road that Benson and Moorhead are running on, as an unseen force antagonizes the two apartment loners toward pure insanity, another common thread loosely connecting their films. Their mania devolves quickly, but the question remains the same: how much of this is real, and does it even matter if it’s not? To these two characters, it’s the realest aspect of their lives, a string of events that give meaning to an otherwise listless existence. And so it has value to them, and it becomes relatable on the basic level of desperately wanting something to be real. When Levi and John get in over their heads, which happens sans resistance, there’s no way that Something in the Dirt can end on a happy note, but it remains a smart thriller, a genre film committed and receptive to the melted minds of its characters and the equally melted minds of its audience.

Something in the Dirt premiered at the 2022 Sundance Film Festival.