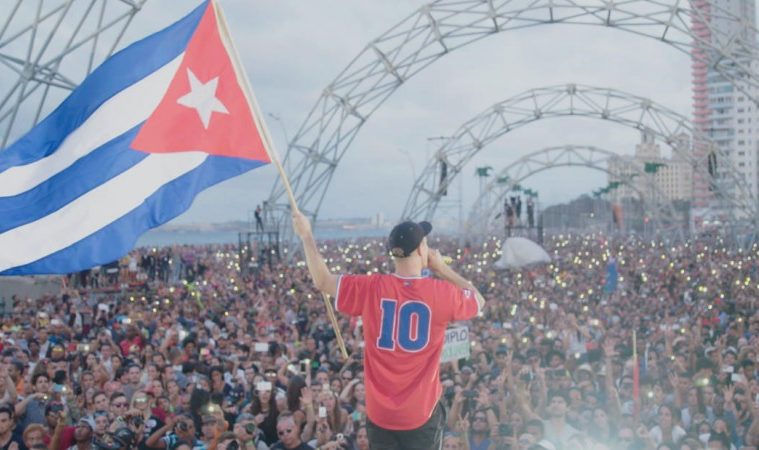 Sundance Review: ‘Give Me Future’ is an Illuminating and Rousing Geopolitical Documentary

A modern-day cultural Berlin wall, Cuba may not be receptive to commerce, but it remains open to the art and culture from its neighbor 90 miles north. As such, images of the country remain illusive and seductive to an American viewer. It’s this kinder, gentler world of “normalized” relations that serves as a jumping-off point for Give Me Future, as EDM trio Major Lazer dream of adding a Cuba show to their tour of conflict zones. Known for summer bangers “Lean On” and “Light It Up,” they group has an easier time playing in Pakistan and Venezuela, despite the Caribbean vibes of their most popular hits.

Diplo, Walshy Fire, and Jillionaire have a simple goal: making the world smaller by making the world bigger. Their goal is to find a Cuban-American promotor to work for fourteen months before the announcement of new diplomatic relations between the two countries. Once found, he agrees to produce the show with the added challenge of sourcing all the gear locally and going through official channels, which require the usual bureaucratic red tape. Meanwhile, The Rolling Stones, scheduled to play Cuba after Major Lazer, are importing top of the line gear and staging from elsewhere.

Major Lazer is pulling off something rather unique: they are the first band with a current hit to play in Cuba. They’re not a nostalgia act, but of the here and now, and they find an unlikely fan in Charlie Rose, who expresses his enthusiasm both on his CBS morning show and on-camera for this documentary. All in all, it’s a new era in the shadow of the American Embassy in Havana. Meanwhile, Diplo and the boys have intimate meet and greets with students and aspiring record producers and, in the process, source local talent for their performance. This recalls their previous collaborations and the evolution of several hits as director Austin Peters provides background on the formation of Major Lazer and Diplo’s early collaborations with M.I.A. and Santigold.

All of this would be for nought if the youth of Cuba had no idea who Major Lazer were, but thankfully a resourceful, anonymous 27-year old has figured that out. The creator of the infamous paquete, a 1TB hard drive with content downloaded at business class hotels with high speed internet, he ships a weekly dose of culture from the United States featuring music, movies, and TV shows. Sending them around the country, they slowly make the rounds to parts far beyond the Havana. The officials haven’t stopped its distribution as the curator(s) stick to a “no porn and no politics” format. His way of delivering content to those with little access to a tightly regulated internet has even sparked interest from Netflix executives in the United States, who find a way to bypass expensive government wi-fi that charge the average Cuban 10% of their monthly salary for an hour of internet access.

While the privileged American kids of the EDM documentary Under the Electric Sky were annoying in their idealism, the crowds that overwhelm Major Lazer have a lot of look forward to, from the casual fans to a 60-year-old die hard who is quick to show off his MP3 player loaded with Major Lazer tunes direct from the paquete. Lensed by Deering Regan and Eric Yue, Give Me Future also offers an abundance of gorgeous Cuban imagery.

Running 88 minutes, I wished the film spent a little more time in the mode of a concert film as the spectacle of a crowd that gathers from every corner is quite an uplifting sight to see. As cultural ambassadors, it’s easy to share Charlie Rose’s enthusiasm for a new future even as the band, overwhelmed by the crowd, does their best to perform with strict government regulations. Give Me Future isn’t just a film for Major Lazer fans; it’s a light, yet illuminating geopolitical documentary that’s rousing while just stopping short of tearing the roof off the theater.

Give Me Future premiered at the Sundance Film Festival.