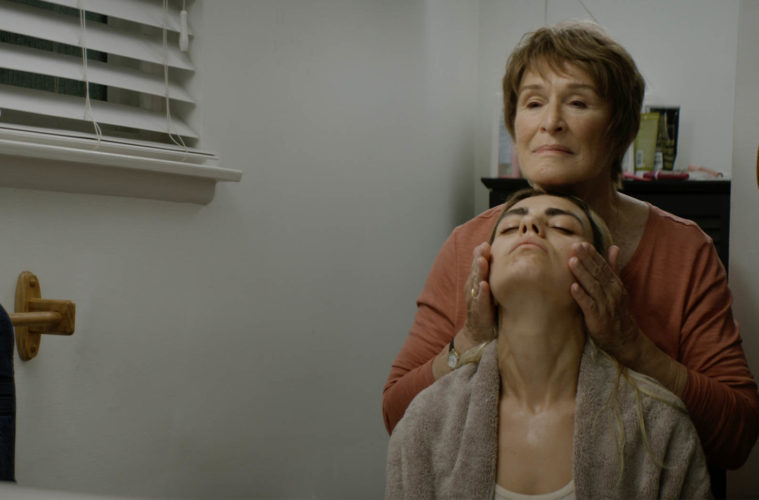 The front door cracks open and the image is jarring. There stands Mila Kunis, her hair bleached, her face and arms scarred, her skin a sickly yellow, her mouth missing its top row of teeth. As Molly, a 31-year-old drug addict, all she wants is another chance. And there stands Glenn Close, peering around the lock, terrified of who is standing on her porch. As Deb, the mother of this drug addict, all she wants is for her daughter to get clean. On this particular afternoon, that means shutting her out. Thus begins Four Good Days, a tired and trialed tale of drug addiction, and the devastating decisions made to conquer it.

Addiction, especially in today’s climate, remains a pressing and persistent societal ill, and also an enticing subgenre for filmmakers to tackle. The basic structure of these movies, however, relies primarily on two outcomes—victims will get sober and change their life, or they will relapse and restart a long, grueling, emotional process. That means the drama and expected outcome is limited, already baked into these domestic depictions, and that the tone, spirit, and performances must transcend them to provide a powerful and connective pull.

Returning to the fraught relationship between mother and daughter, director Rodrigo Garcia, who co-wrote the script with Eli Saslow, struggles with that imperative and the delicate balance between authenticity and exploitation. Based on the true story of Amanda Wendler and Libby Alexander, whose personal bouts with addiction were chronicled by Saslow in a Washington Post article, Four Good Days aims to show both perspectives. Like 2018’s Beautiful Boy, another bleary saga of addiction, Garcia’s movie is interested in Molly’s physical degradation and her cyclical choices just as much as it wants to expose Deb’s psychological prison and parental regrets. Some of this is moving material, but mostly the script begins checking off boxes and scenes too calibrated to elicit real belief in progress or shock.

After Molly sleeps outside the house, Deb agrees to bring her into a detox house, her 15th visit. She’s been addicted for 10 years, using heroin, oxycontin, methadone, crack, and vicodin, which has effectively dismissed and tarnished every relationship in her life. But she pleads: this time will be different. After a few sober days, the doctor offers Molly a shot of Naltrexone, which provides a month of immunity from the effects of opioids. It can only be administered, however, if drugs remain out of her system for four consecutive days. It feels like an eternity for Molly, and the ensuing week becomes a test of endurance.

Close effectively portrays a mother on the brink of hysteria and Kunis sinks into itchy and deceitful tics, navigating this fractured bond with an appropriate balance of resentment and tenderness. It’s all commendable. When they return home, Molly finds that all the outside doors in the house spark a beeping alarm when they’re opened, a small domestic precaution (and annoyance) that kindles their discord. When Kunis slams a door, Close shakes and lets out a heavy sigh and you feel every emotion in her exhale; the fear, the uncertainty, the anger, the remorse surrounding every interaction. Deb’s second husband (Stephen Root) is mostly absent in this insular struggle, and guilt about the past—including her divorce and the inciting drugs that doctors supplied Molly as a teenager when she broke her ankle—lingers throughout their California community. When Molly’s ex-husband (Joshua Leonard) brings her two kids to the house, you see just briefly what an alternate life might have been.

Garcia has the ingredients for empathy, but the movie tries to achieve it through plot devices that ring false. That includes a trip to a local high school, where Molly transforms into a motivational speaker, and then detours to her old stomping grounds, where Deb navigates the hidden and seedy lifestyles of dealers and users. They dismantle the momentum of their internal conflict and resolution, stuffing and flattening the story. These events might have happened in real life, but in Four Good Days, like many addiction movies, their calculation subtracts more than adds to its emotional center. It’s a shame that with these actors, it all feels done before.