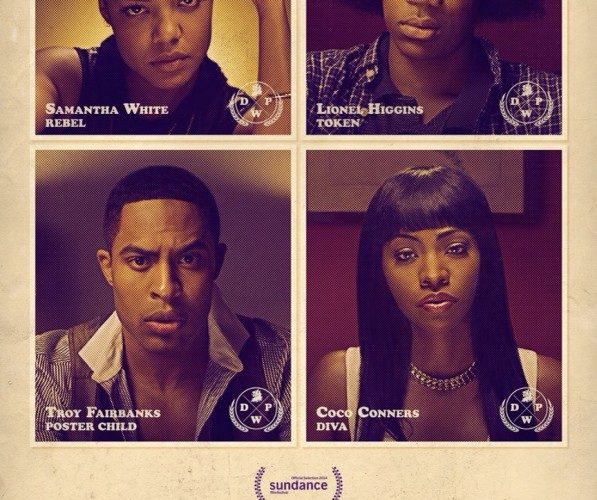 One great aspect of the Sundance Film Festival is the occasional discovery of potential new and important voices in American cinema. Dear White People, the debut feature film from writer/director Justin Simien, heralds just that. It is a compelling, yet uneven scattershot of humor and commentary about racial conventions in the 21st century. Set in a fictitious Ivy League university, the film skewers the preconceptions of race in the modern era and how both sides of the coin can negatively reinforce stereotypes. The strength of the film is its razor-sharp dialogue brimming with quick-fire humor that would make Kevin Smith smile. Simien is a natural at creating flowing conversations that punch with intelligence and wit, but are also funny and entertaining. However, Dear White People suffers from several first-time filmmaker pitfalls that prevent it from being the knockout debut it could have been.

The film opens by foreshadowing a climatic catastrophe of racial conflict at Winchester University due to a party getting out of hand, which unfortunately dulls the final denouement. The story is split into chapters with playful title cards reminiscent of Wes Anderson’s Rushmore. The school is divided into several different dormitories that reinforce the segregation divide, from the preppy rich white kids to the residential hall where all the black people stay. Samantha White (Tessa Thompsan), a bi-racial film major, hosts a college radio that bares the film’s title and aggressively highlights racial misconceptions and appropriations. For example “Dear White People, the amount of black friends required not to seem racist has just been raised to two. Sorry, your weed man doesn’t count.” Her inflammatory show leads to her becoming the president of her dorm, prompting her to fight against a new ruling to encourage diversification in the school. While there are a variety of interesting characters that inhabit the word of Winchester University, many lack the depth to feel like fully realized personas. Instead many of their voices feel like a direct mouthpiece for Simien to vocalize his opinions. The bi-product of this is the characters then tend to feel like caricatures of the very stereotypes that the film attempts to skewer. Characters like Coco Conners, a girl from the hood who prefers to distance herself from her upbringings and only associate with white people or Lionel Higgins (Tyler James Williams from Everybody Hates Chris), a gay student reporter who doesn’t understand black culture yet is assigned to write a profile piece on race at the school and a shrewd reality show producer hoping to make a show called Black Face/White Place. Then there are even less developed archetypes like the militant black union or the obnoxious mean spirited rich white dudes that people will recognize as familiar but also underdeveloped and catering to serve thematic agendas.

There are also some small technical issues with the film, such as awkward framing in certain dialogue scenes and stilted editing that slows the pace. While these are minor distractions, they collectively detract from the overall experience. Still, it is refreshing to see smart material in the hands of talented young African-American actors, as opposed to simply being reduced to roles that mainstream Hollywood films. While certainly flawed in some aspects, Dear White People offers up some droll and relevant observations on the commodification of race and ensures that Justin Simien is a filmmaker to watch.

Dear White People premiered at Sundance Film Festival 2014. One can see our full coverage of the festival below.