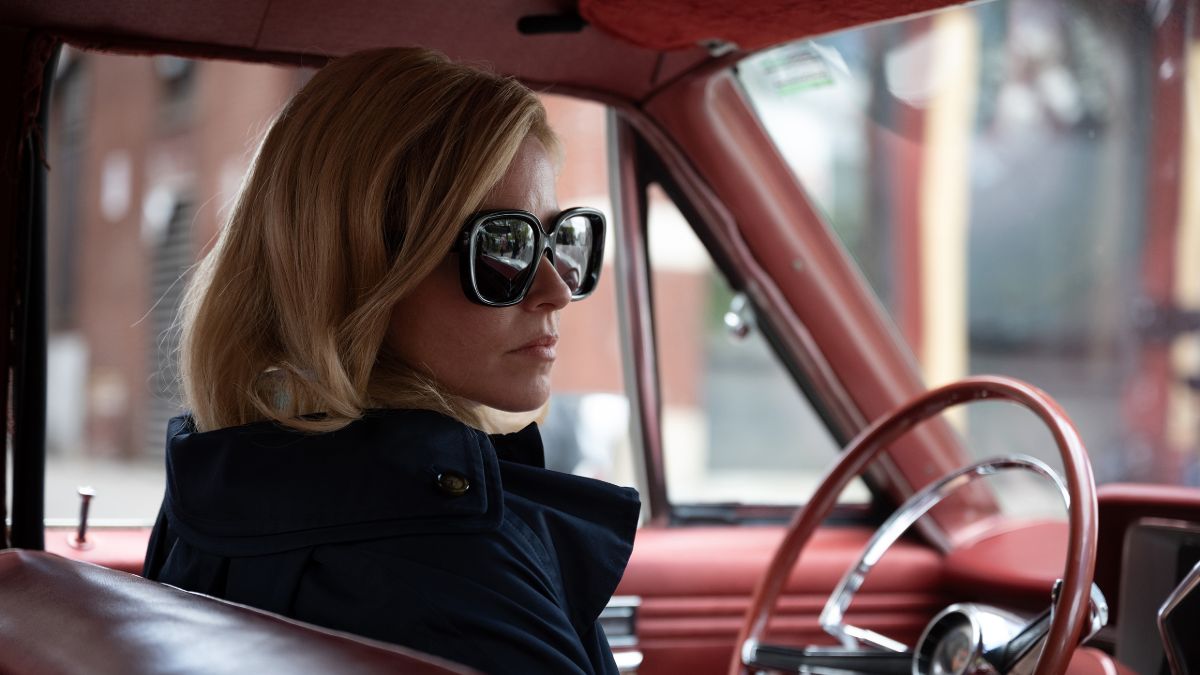 Call Jane is a competently made, well-acted historical drama that doesn’t give its charged subject matter the stakes or urgency it needs. Loosely based on The Jane Collective, an underground organization that provided illegal abortions for women in need of its services, Phyllis Nagy’s feature-length directorial debut offers a timely, nuanced, mostly sunny look at the five years preceding the Supreme Court’s Roe vs. Wade ruling. That it chooses to hitch its perspective to a conservative blonde suburban housewife is both a helpful storytelling device and kind of a bummer.

The movie begins with a long tracking shot behind the bob of its protagonist, Joy (Elizabeth Banks), walking through a Chicago ballroom’s hallway. After rebuffing her husband Will’s (Chris Messina) motion to celebrate and mingle with his new law firm partners, she heads to the building’s police-lined front steps as protesters shout and scream in the distance. Intrigued by their cause (this is August of 1968) and the impending tides of change, Joy takes a quick peek and then retreats inside to safety. Like Joy herself, there’s only so far Call Jane is willing to go.

It does, however, show the hurdles of living in a masculine-defined environment. When a doctor tells Joy, two months pregnant with her second child, that a heart condition gives her a 50-50 chance of living should she give birth, she has few legal options—especially after the hospital board declines to give her an emergency abortion. She considers falling down the stairs. She even visits a shady clinic. But her attempts to alleviate her situation fail, the secrecy around her husband and daughter Charlotte (Grace Edwards) becoming too much to bear. Then she finds a flier: Call Jane.

After a consultation over the phone, she takes a risk, agreeing to get picked up and dropped off at the Janes’ makeshift clinic, where a young male doctor (Cory Michael Smith) talks her through the 20-minute procedure. It’s a quiet and powerful scene, and Nagy leans on Banks working through her emotions and wincing facial expressions, tightening the frame on her breathing and clenching until the abortion is completed. Next door, a bowl of spaghetti awaits her, as does Virginia (Sigourney Weaver), the collective’s founder who has plans for Joy, a woman with money, connections, and lots of free time.

The next week, Virginia checks in with Joy and asks her to pick up a young woman who needs similar transportation to the clinic. Joy obliges, later convincing herself to attend the group’s weekly meetings. Throughout the rest of the movie, she becomes an embedded member of Jane, easing women into the doctor’s chair, performing her own procedures, and eventually teaching others to operate, if only to keep up with the seemingly insurmountable number of requests sent in the mail and over the phone. Despite mentions of mob raids and the potential injurious consequences of amateurish doctoring, Call Jane keeps the drama and tension centered on Joy’s transformation into a women’s rights activist, and the challenge of keeping it all hidden from her family.

That’s mostly a credit to Banks, who shoulders some career-defining work by delicately portraying the nuances and careful facades of Joy’s deceptive lifestyle. It’s enough to sustain this kind of movie, but every time the screenwriter Hayley Schore and Roshan Sethi return to her home, or watch her give another “art class” alibi to her next-door neighbor (an engrossing Kate Mara), they lose the energy generated by the organization’s meetings and sisterhood. You want to live a little more in that space—to watch Weaver and Wunmi Mosaku argue further about the lack of Black women being treated at their facility, or to debate about which desperate candidates get accepted. “It’s life or death with all of them,” Virginia tells her colleagues, a sobering reminder as they sort through schedules and voicemails.

Perhaps because of the yellow-lit aesthetic and period-specific interiors, or even the all-women meetings themselves, it’s easy to spot the similarities to Mrs. America, the acclaimed Hulu series documenting the competing sides of the Equal Rights Amendment. In some ways, it feels like The Janes could have benefited from a similar kind of series—a chance to get deeper into the inter-group politics and threats each member faced. By the time the organization closed shop, it’s estimated to have provided more than 12,000 abortions, clandestine work featured in the upcoming HBO documentary The Janes, which also premiered at Sundance this year.

To a good degree, Call Jane simplifies those achievements, even as its timely messaging vibrates throughout. Over the last few years, abortion-based movies—Never Rarely Sometimes Always, Unpregnant, and Plan B—have featured pairs of young women, often teenagers, traveling great distances to find a doctor capable of performing a procedure. That these are contemporary stories puts Virginia’s closing toast into greater context. “Hello to new battles,” she boasts during a celebration of the clinic’s redundancy, a cheerful note that, in light of recent judicial developments, still sounds hollow.