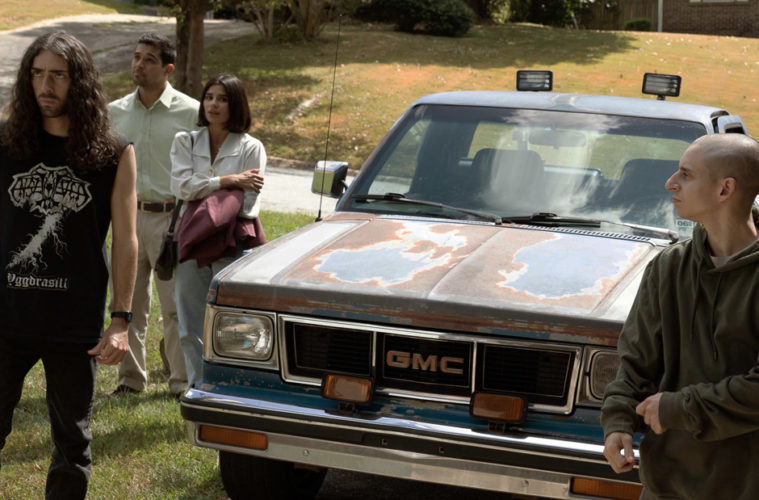 Sibling rivalry seldom gets treated with any seriousness in modern mainstream cinema. This makes Esteban Arango’s new coming-of-ager Blast Beat quite the rarity on first glance. Brothers in name only, metal head Carly (Mateo Arias) and skater punk Teo (Moises Arias) can hardly share the same space together without going to war over something. The former is a mathematical genius that dreams of becoming a NASA scientist in the United States, while the latter has talent to be a great artist but seems happiest committing petty crimes and tagging city walls in their native Bogotá.

This tenuous familial relationship is made even more so because of Colombia’s violent political climate in 1999. Government forces are waging war against guerilla outfits in the jungle as corruption runs rampant in the cities. After experiencing an upper-middle class existence for much of their life, the two wayward teens are thrust into an uncomfortable moment of transition. Local thugs have demanded extortion payments from their successful businessman father (Wilmer Valderama), who has since fled the country for Atlanta, Georgia. Facing harassment and potential violence themselves, Carly, Teo and their mother (Diane Guererro) are forced to immigrate to the United States as well hoping to begin a new life.

As per usual, America is a less than welcoming host. The boys experience overt racism at their new high school, not to mention cultural and social isolation amplified by teachers who don’t know how to relate. It also doesn’t help that they resent each other deeply. The tension in Blast Beat produces pernicious effects on the family unit akin to Jodie Foster’s great domestic reckoning Home For the Holidays. Except here, the vindictive and personal jabs are even more pronounced since they are experienced within the stressful context of an immigrant family’s focused attempt to assimilate.

In casting actual brothers to play the lead roles, Arrango taps into an organic tension that turns out to be the film’s greatest asset. Moises Arias is very effective at personifying what it means to be a younger sibling who feels left behind (in a just world he’d already be a star). Every single interaction between Carly and Teo carries with it the weight of an unfulfilled vendetta, and at times the bickering feels like it’s more destructive than any of the animosity produced by local citizens of the good old U.S.A.

While both central performances give Blast Beat an inescapable urgency, the film can’t overcome its decision to embrace tired genre tropes that ultimately mark the screenplay. Conveniently, each young man gets a newfound love interest, but also experiences classic teenage stressors that plunge them into situations where adult responsibility seems like an alien concept.

At times, Blast Beat appears more interested in the narrative destination than the journey itself. Many scenes function as filler to get Carly and Teo from one challenge to the next, and at some point it just becomes more noise in a heavy metal awakening. A very conventional structure undermines Arrango’s well-intentioned interest in deconstructing how classic immigrant stories unfold, specifically the false promises that come with dreaming big in America.

Ultimately, Arrango’s benignly styled film reaches both familiar and contradictory resolutions depending on the brother. Teo’s endgame feels deeply strange and conveniently nationalist simply to contrast with Carly’s proto-Americanism. Far more interesting than the two’s separate harmonies is their intense discord together. Theirs is a pain and resentment that can’t be faked, and for a while Blast Beat genuinely grapples with the not-so-subtle ripples of their puncturing combat. Too bad the film opts for classic Hollywood closure rather than following through on the promise of its painful, shifting origins.