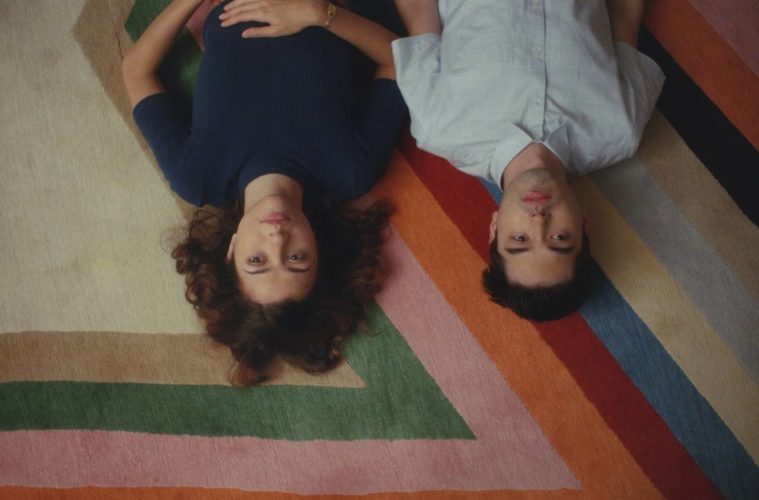 Early on in Straight Up, an obsessive-compulsive mixed-race millennial named Todd (James Sweeney) tries to furiously explain why he must stop dating men and focus on finding heterosexual love. His unimpressed psychoanalyst Dr. Larson (Tracie Thoms) listens to this rattling machine gun dialogue (echoing directly from the screwball pantheon) of gay denial without expressing any emotion before sardonically replying, “You’re willingly barking up the wrong tree.”

So many romantic comedies involve misguided characters whose actions directly go against their better judgment. But the rashness associated with romantic self-destruction can sometimes be misconstrued as exciting. This doesn’t seem to be the case for Todd, whose deteriorating mental health and confused sense of identity have become so entangled that his banal headfirst dive into hetero-normalization would appear the only plausible escape from a lifetime of loneliness.

Enter Rory (Katie Findlay), aspiring actor and conversational dive-bomber whose intellectual speed instantly grabs Todd’s attention when the two meet cute in the Self Help section of their local Los Angeles library. She’s instantly attracted to him, but not in a sexual way. Their chemistry is less organic than convenient since both are in desperate need of a distraction from their obviously compromised perception of reality.

Written and directed by Sweeney himself, Straight Up follows these two characters in suffocating fashion as they knowingly bark up the wrong tree together. What makes the film unique within its genre of choice is how the script jumps right past the good stuff (new love, new physicality, new affection) to a bickering, at times downright angry version of sexless married hell.

For a long time, the film’s narrative painstakingly mirrors its characters’ desire to tread water, recycling deathly twee and quick-witted conversations just to pass the time. Todd’s vain friends/surrogates receive ample opportunity at parties to gawk and admonish what they see as a terrible situation. A trip to meet his not so casually racist father (Randall Park) and snarky mother (Betsy Brandt) provides a strange window into Todd’s stressful, repressed origins. In the case of Rory, her backstory hardly exists outside of a few messages left on her absent mother’s voicemail.

Such an uneasy balance of context and subtext makes for a singular genre cocktail. There’s very little concern for the future in this pairing, only the momentary quips that reinforce a mutual appreciation for certain topics and phobias. Meanwhile, the viewer either buys into these precious shenanigans at face value, finding them adorable, or resents it all as cloyingly obvious. Naturally, one could go back and forth between the two depending on the moment.

But as Sweeney gets to the brass tax of addressing Todd’s disturbing rationalizations and denial more directly, Straight Up becomes a far more sobering exploration of the lengths we go to in order to hide from the truth. There’s an uncomfortable sequence toward the story’s climax where Todd metaphorically reanimates the hipster musical number from (500) Days of Summer to win back Rory’s heart. Instead of seeing this gesture through Todd’s delusional eyes, we see it from her perspective in all its painfully sad and pathetic glory.

Still, Rory remains something of a cipher even after the closing credits crawl, which leaves Straight Up feeling more like a therapy session for Sweeney rather than a truly equitable romantic comedy interested in multiple points of view. Ultimately, she’s simply the dutiful best friend whose importance is merely proportional to her proximity to the main character. And since Findlay’s got talent to burn, this is a missed opportunity.

This isn’t to say Sweeney’s heart-wrenchingly personal attempt at mining his own emotions isn’t worthy of the feature film treatment. It most certainly is. Often charming in the most confrontational way possible, Straight Up pays due respect to the endlessly creative ways people delude themselves into avoiding difficult realities. It may talk (and talk) a good game, but it’s in the quieter moments of silence when it speaks volumes about the perils of modern alienation.

Straight Up opens on Friday, February 28.