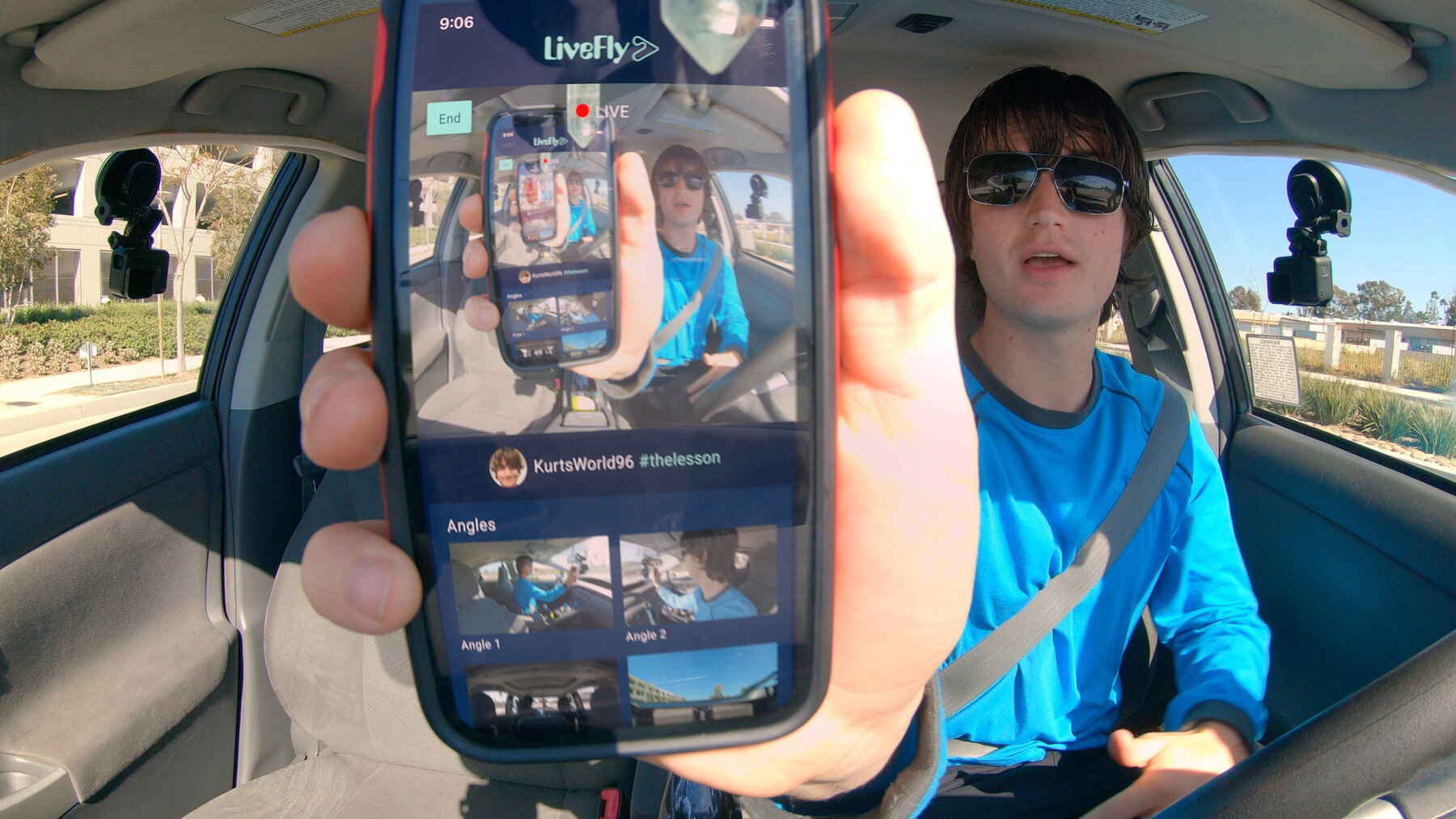 If you go on Kurt Kunkle’s Instagram, you will find stories filled with “pull yourself up by your bootstraps” American happy talk. Kurt leans in, and mostly fails, at living social media meritocracy’s “fake it till you make it” ethos. Whereas social media elites show off their good fortune then go out and live their lives, poor, working-class guys like Kurt scrounge up good vibes, in every embarrassing form, to gain followers (he calls them “Kurties”)––all in hopes of climbing the social media ladder. What he finds at the top is the basis for Eugene Kotlyarenko’s Spree, an equal parts terrifying, thrilling, and satirical look at how social media can warp the mind.

A rideshare driver for Spree (Kotlyarenko’s version of Uber), Kurt Kunkle (Joe Keery) creates an evil social media campaign called #thelesson to go viral. He installs cameras in his car and livestreams a day-long rampage across Los Angeles. As one Spree rider dies after the next, Kurt co-opts the audiences of more popular influencers and creates a captivating legacy in internet culture.

White supremacists, chauvinists, feminists, instagays, and the elderly meet Kurt on his journey but instead of basic human empathy, he communicates a jovial disconnect from reality. He doesn’t know how to engage people because he doesn’t have a moral code. Instead of helping Jessie Adams (Sasheer Zamata) when she’s harassed by her co-rider Mario (John DeLuca), Kurt interprets her troubles like it’s a video game where the goal is to have Jessie follow him on Instagram for clout. Kurt is like a more awake version of Pete Davidson’s SNL character Chad, without the forced audience laughter to tell you it’s funny. Both are terrifying, but only Spree lets you realize it.

Kurt only understands the language of likes instead of empathy and treats them like points in a game. He makes his kills with a blank, solipsistic smile of dissatisfaction. Every “win” expands his need for blood but doesn’t satisfy it. The social media meritocracy Kurt plays in only teases his needs instead of meeting them. He’s like a nihilist Pac-Man; driving riders who are nothing more than avatars––specters only useful for consumption. By contrast, Kurt is a nihilistic extreme to Travis Bickle’s awakened right-winger in Taxi Driver. Moral righteousness is to Travis as clout is to Kurt. And unlike Travis’ pursuit of martyrdom, Spree is about the successful creation of an incel martyr.

From Instagram to Reddit, the media ecosystem incentivizes his killing spree. At least a dozen people walked out of my Sundance screening and a bunch of critics outside of the theater were in denial about Spree implicating all forms of media glamourization of people like Kurt. It’s the first social media movie I’ve seen that rightly contextualizes how we use each other online, which ultimately makes it a moralistic film. Moralism is an unpopular word, but the film’s moralism is not one of final judgment, but as a critique of our values, also exemplified in past classics like Network, Ace in the Hole, and Dr. Strangelove. Spree finds social media unworthy of a species so worthy of dignity, and the movie is also schlocky fun.

At any given point when social media feeds are on screen, you can read comments from Kurt’s followers. Some reward him with digital currency to commit more crimes. Others beg him to stop and question why he’s on other people’s feed. Eugene Kotlyarenko wrote thousands of comments that help build the audience’s understanding of what’s influencing Kurt: constant messages to perform, or that his content sucks, or here’s a few bucks to murder another person. The constantly moving feed of comments feels real as any set of comments I’ve seen on Instagram Live. They move faster than the movie’s own breakneck pace and add to the stimulation overload that mimics the experience of being online. It all feels too real and unsettling, and that’s the point.

Although the social media movie is in its early incarnations, Spree is a preeminent example of portraying the methods in which we see and use each other online. Kurt’s behavior is extreme because it’s satire, but the root need and pain isn’t unique to him. Everyone needs a little love and attention, but the ground we’ve ceded to the social media meritocracy can never replace the validation we receive when welcomed into another’s presence. No one wants to be around Kurt because he’s awkward and, to make matters worse, he doesn’t know it’s his personality that’s repellant. He takes drastic measures to be seen, but in doing so he builds a legacy of destruction.

Spree is now available in theaters and digitally.