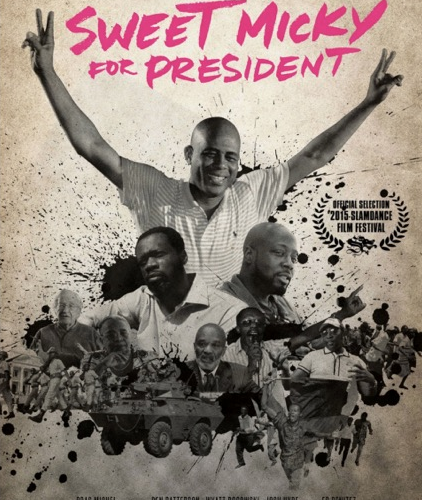 Falling short of the best political sausage making films and TV series such as The War Room and Tanner 88, Sweet Micky For President is a somewhat insightful if not one-sided look into the election of Michel Martelly, a raunchy pop-star who runs for and wins the Haitian presidency. Calling attention to several social ills in his music, he’s asked to run by Pras Michel of the Fugees, creating a rift with another aspiring Haitian presidential candidate, Wyclef Jean. Apparently there’s more baggage than just the Haitian president election preventing a Fugees reunion — Lauren Hill, it appears, declined to back either candidate.

Partly a character study of Michel Martelly, Sweet Micky for President begins with great promise and inherent drama and mostly follows through, competently tracing his candidacy. Perhaps a more interesting and insightful film, if not a difficult one, could have been made after the fact. While Haiti is corrupt, and much of the corruption is known, director Ben Patterson seems to tow the party line without uncovering additional information the way that Marshall Curry had when exploring the politics of (now convicted felon) Sharpe James in his excellent Street Fight. While Curry encountered police intimidation in Newark, New Jersey, the threats Patterson might have faced as an independent journalist in Port-au-Prince are unknown. It speaks of corruption but provides no on the ground witnesses to verify the accusations. The picture seems to criticize Wyclef Jean (whom is ultimately ruled ineligible to run) while embracing a Western machine that supports Martelly’s run. After his election, we learn in a post-script he has problems governing, similar to that of Obama – his opposition continually blocks his actions while discrediting his legitimacy.

A fascinating film can be made of this and Patterson has crafted some tremendously interesting moments as Martelly finds support and guidance from the likes of Sean Penn, Bill Clinton and Ben Stiller in his bid, overcoming a corrupt primary and winning the general election. Despite its charms and insights I found the material to be a bit thin at times as its shifts focus from Martelly to Pras Michel behind the scenes offering his support both on the ground in Haiti and throughout North America. I suppose the issue at hand is a test I frequently apply while watching journalistic documentaries: could NPR do what this feature film does better in 20 minutes or less? The answer is both yes and no. Patterson simplifies the election and politics in a way that Vice would while glossing over Sweet Micky’s qualifications. The result is an accessible picture lacking in nuance. As a character sketch it feels incomplete, despite some a strong first act: the film’s distinct perspective remains focused on Martelly and his promotional machine at the top. Despite good intentions it misses the larger, more interesting picture on the ground.

Sweet Micky for President screened at Slamdance Film Festival 2015 where it won the audience award and jury award for documentary feature.