Selah and the Spades Review: Tayarisha Poe’s Debut Explores the Burdens of Striving for Perfection 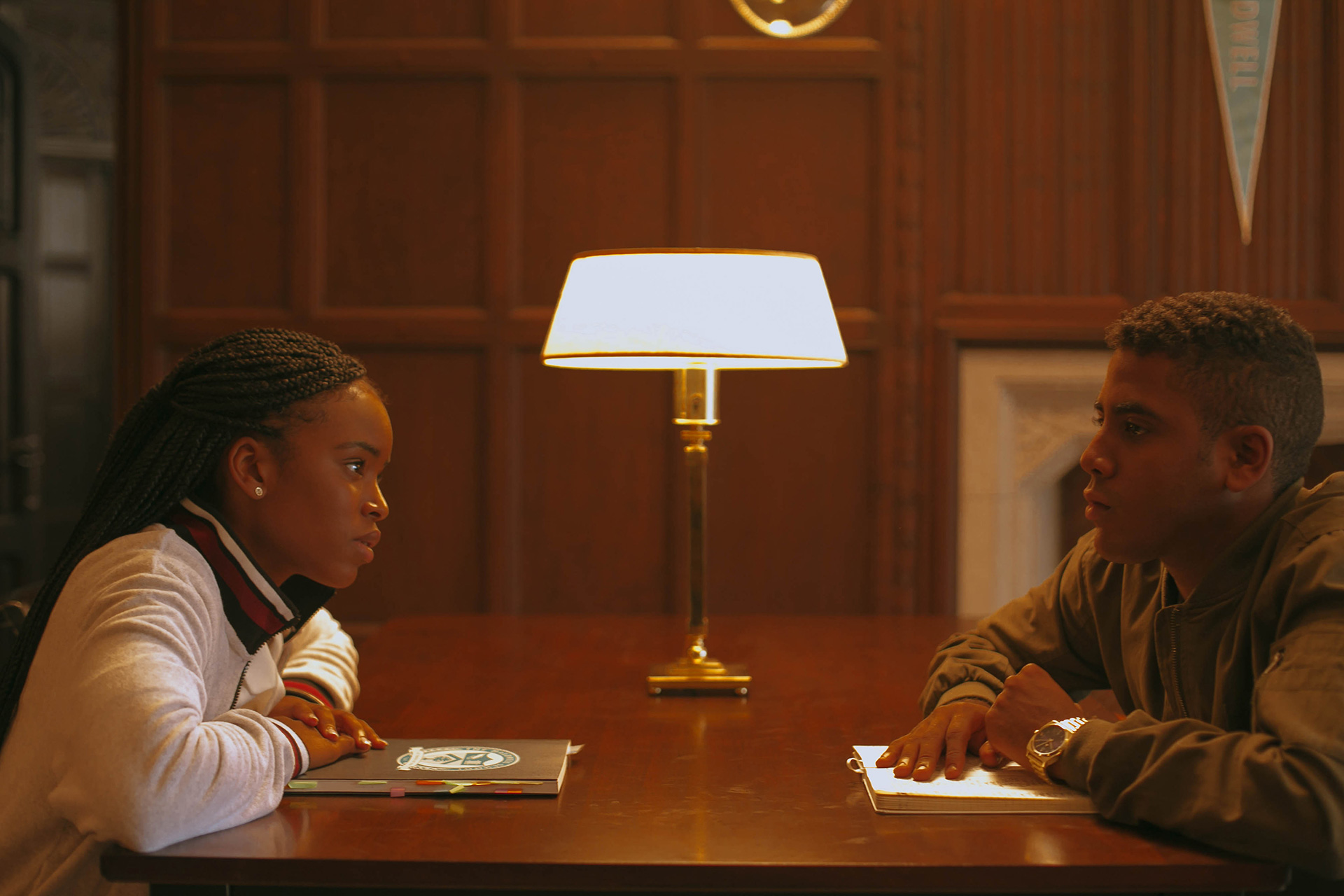 It’s senior year for the infamous teenage faction heads who rule Haldwell right under its custodians’ noses—the final two semesters to ready the successors they’ve handpicked to continue stewarding the longstanding legacy of extracurricular opportunities their tandem organizations have provided this east coast boarding school’s student body for decades. The passing of the batons proves even more crucial for this graduating class, though, because of the ever-present desire to stop their behind the scenes activities by a newly instated headmaster (Jesse Williams) uninterested in turning a blind eye their way. Everything must therefore be perfectly planned and executed whether their senior prank, their usual series of clandestine parties, or their unfettered supply chain of the best narcotics a private campus student’s parents’ money can buy.

While Bobby (Ana Mulvoy Ten), Tarit (Henry Hunter Hall), Amber B (Francesca Noel), and Two Tom (Evan Roe) are cautiously determined to ensure the added pressure doesn’t prevent them from upholding their reputations, Selah (Lovie Simone) has found herself backed into a corner with nobody under wing she can trust. Her right-hand Maxxie (Jharrel Jerome) is headed to greener pastures as well and tense talk surrounding a replacement-gone-bad lingers in the air whenever the factions meet for their regular state of the unions. If you ask her, however, Selah will say everything is under control because everything always is on her watch. She’s an intelligent, ruthless, and popular young woman who projects a fearlessly confident and calm image to assuage anyone’s uncertainty. But we see beyond that façade.

Writer/director Tayarisha Poe draws us in with these gradually expanding cracks to get at the heart of what it’s like to be “perfect” and all the undue stress that comes with the label. You can’t blame these kids for taking on that burden, however. The roles they serve make them into known commodities around campus—entrepreneurs, fixers, and people who demand the respect none of their fellow students would dare provide the adults who are paid to have authority over them. They possess the power to move mountains and they learn to crave the adrenaline rush experienced whenever they wield it. Some rule altruistically (albeit with opportunistic intent) and some selfishly. And some, like Selah, adopt a totalitarian approach to seize a sense of control they otherwise lack.

It’s no coincidence then that Selah and the Spades is led by a pretty Black teen since those are all details the world will use against her. They’re features that force her to be the best just to receive a similar trajectory as that which white boys roll out of bed into while still sleeping. Selah needs the best grades to overcome the stigma that her looks will open any door she wants. She needs an impeccable résumé to say she got into a good university on merit and not affirmative action. And she must do it all under the microscope of being a woman and therefore an object at the whims of a patriarchal society that cultivates an atmosphere of victim blaming to oppressively remove their agency.

So of course she’s going to rule with an iron fist. Of course Selah is going to take back what little control she can from men, her mother (Gina Torres), and anyone else who dares to cross her. Maybe it’s through the freedom of making the cheerleading squad sexy or maybe it’s through the fists of her heavies to send a message that she won’t be cheated out of what she’s owed. She didn’t choose this school (or the next), but she can choose who she’ll be within it. She’s a Godmother to whom students come looking for favors and a kingpin with the resources and infrastructure to operate outside the lines. In this world Selah is queen and she will not suffer fools or rebels.

As they always say, though: absolute power corrupts absolutely. To be at the top is to be paranoid and to be paranoid with the rage Saleh holds beneath her malicious smile is to make decisions that go too far. But it’s those difficult choices that made her. It’s the fear she’s instilled in others that’s given her the crown. That’s what she hopes to teach her latest protégée Paloma (Celeste O’Connor)—an underclassman with the potential to understand what a reign such as hers entails. Because this isn’t a time of peace (if there ever was one), however, things are quick to unravel and thus quick to earn a drastic response. Who can Saleh trust during such tumult? And whom can she continue trusting once mistakes are made?

If you think that sounds unnaturally intense for a high school drama, you’re correct. Strip the overtly satirical comedy away from Election‘s Tracy Flick and place her in a hard-boiled environment like Rian Johnson’s Brick and you can begin to approach the tone Poe provides her film’s power struggle between today’s youth and their own future. Blood is spilled thanks to the existence of deception around every corner, but we’re still talking about teenagers. Every time things get too heavy, characters try to laugh it off and remind Saleh that they’re imperfect children having fun. Except that’s not how she sees it. She’s surviving by building walls to insulate herself from the emotional suffering “fun” inherently delivers. You can’t get stabbed in the back if you stab first.

The result is a gorgeously shot (courtesy of Jomo Fray), hyper-real look into the pressure cooker of elite education and the severe competitive nature within. Poe creates Selah as a cautionary tale of what happens when we’re pushed beyond our limits and made to watch as things we’ve helped create evolve without us. What happens when power becomes identity to the point where voluntarily relinquishing it feels like losing the only piece of you that was truly yours? How do you channel the fear you have of the real world into the strength necessary to make this fabricated world fear you? The answers lie in Simone’s brilliant performance as she looks so young and fragile opposite her mother and so fiercely menacing opposite her peers. It’s a memorably stunning juxtaposition.

The film doesn’t nail every beat (Williams’ Headmaster always appears as though he’s tacked on as an afterthought devoid of any real danger beyond acting as a viewer—a role that our presence renders obsolete beyond the need for an authority in the abstract to push the faction heads into responding), but what it gets right is unassailable. Nothing proves this more than the relationship shared between Selah and Paloma as it transforms into a mirror of that between Saleh and her mother. When does the effect of our monster make us that very same beast and can we realize what we’ve become before it’s too late? These are questions Poe leaves necessarily ambiguous because of Selah’s complex motivations. Her journey requires the dark possibility that she’s too far-gone regardless.

Selah and the Spades is now streaming on Amazon Prime.