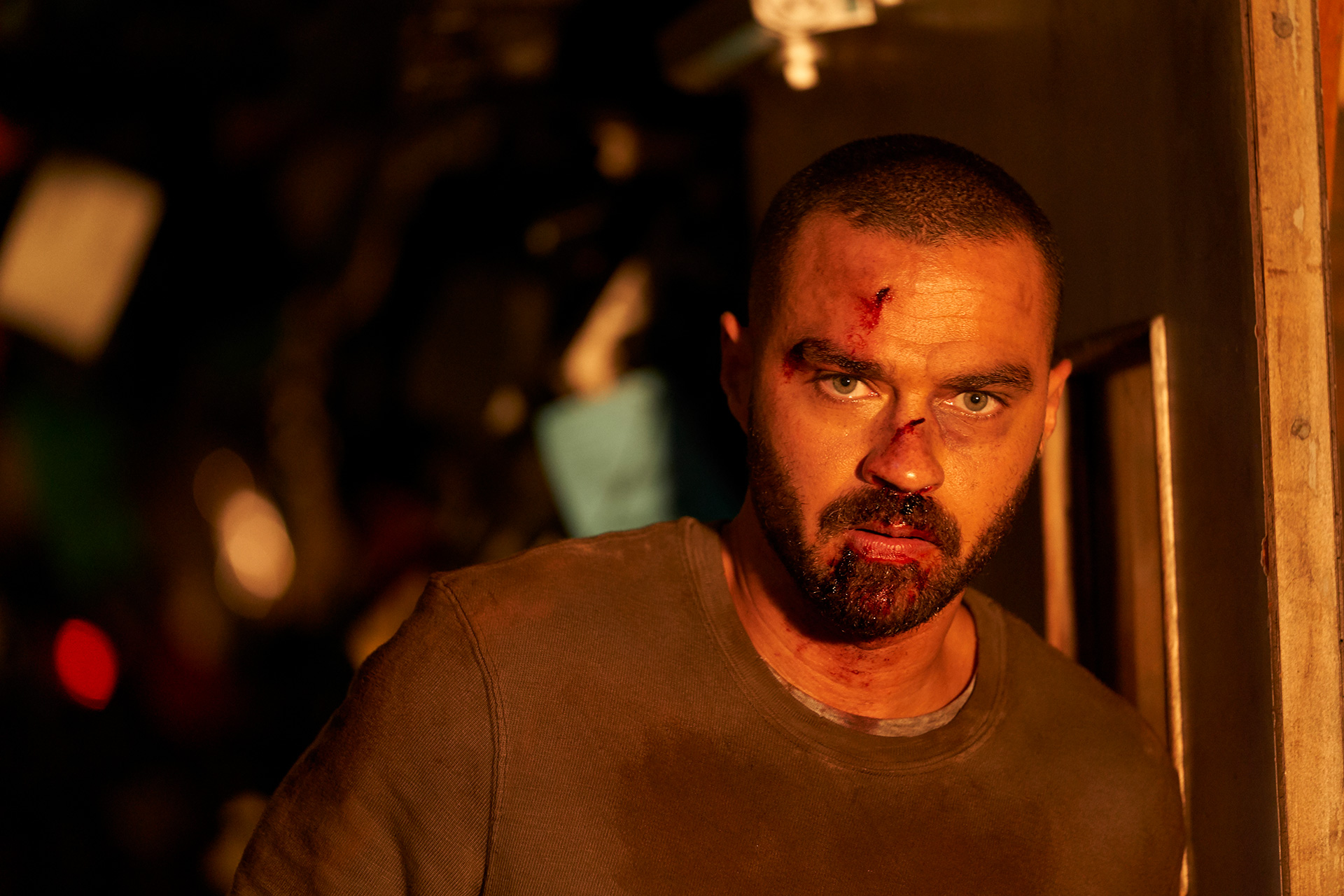 On its most superficial horror flick level, Jay Baruchel’s latest directorial effort Random Acts of Violence works. Co-adapted with Jesse Chabot from Justin Gray and Jimmy Palmiotti’s 2010 graphic novel of the same name, the story sees Slasherman comic creator Todd (Jesse Williams) hitting the road from Toronto to New York City with his wife (Jordana Brewster’s Kathy), assistant (Niamh Wilson’s Aurora), and business partner (Baruchel’s Ezra) in advance of a Comic-Con appearance. The reason they’ve decided not to fly is because Kathy is on a research mission for a new book she’s writing about the real “Slasherman’s” victims along 1-90. Todd’s run of glorifying the terrifying mystique of this killer has reached its end, so it’s only right to honor those lost upon his fictional death.

There’s an effective bit of creative conflict in this premise because it posits that what Todd did was wrong. In many critics’ eyes he stole the trauma suffered by strangers in the town of McBain (where he too briefly resided in his youth) for profit. And if their words didn’t eat away at him enough over the years, seeing Kathy (unconsciously or not) take up a torch for those he’s been accused of wronging definitely packs a punch. That’s why he’s agreed to the road trip. Traveling this highway so she can interview residents means voluntarily experiencing the reality of his art’s fantasy. Maybe then he can find his conclusion—one that will both satisfy fans and assuage his guilt by making the violence and misogyny mean something.

It’s the perfect psychological headspace of uncertainty and anxiety to make him helpless when someone decides to unleash onto him the horrors he’s inflicted upon his characters. An imposing figure (Simon Northwood’s “The Man”) has caught wind of Todd’s press tour and he’s leaving a trail of bodies in his wake. Is this the long-dormant Slasherman returning to show his appropriator what murder truly looks like? Or could it be a fan of the comic who lost his grip on reality before choosing to bring the gore of Todd’s pages to life? Either way, this monster is driving the highway with bloodlust. He’s blurring the line between fact and fiction in a way that renders them the same. Death inspires Todd and Todd inspires death. He’s made complicit.

This complicity is where Random Acts of Violence has the potential to escape its superficial slasher underpinnings for something more. And according to the press notes, it’s also where Baruchel believes he’s done exactly that. I’d unfortunately disagree, though. While he and Chabot do a great job setting up an important confrontation between intent and inspiration, they never actually provide one. Instead they work towards a revelation that undercuts his characters more than it surprises his viewers (Todd and Kathy are either horrible researchers, the filmmakers didn’t do enough to explain why their characters don’t know what they don’t know, or both). If this revelation was exposed earlier, the chicken/egg conundrum it presents could have been better explored. By waiting so long, Baruchel and Chabot simply erase it.

That’s their prerogative and it doesn’t negate the effective R-rated kills that precede it, but it does ensure that the most interesting aspects of their motives become erased too. Without allowing Todd to accept the truth that has been eluding him, he can never fully acknowledge his role in what’s been happening—especially since the script implicitly applauds his comic’s carnage as a means of creating peace out of nightmare. So the film actually does more to prop Todd’s fictional misogyny up as being justified when compared to “Slasherman’s” real-life misogyny than being equally as bad. Letting Kathy call it out and letting her be “strong” when faced with impending doom doesn’t suddenly make up for what a convenience in service of the twist brings to light.

The whole can be frustrating as a result. Every time Baruchel and Chabot tease us with something worthwhile and thought-provoking—whether it’s subverting the genre, uncovering its hypocrisy, or asking questions we should be asking in an era overflowing with hollow horror films that place reaction above purpose—they ultimately stop short of putting it on the table. And Kathy’s thesis that victims should be highlighted above their predators is left flapping in the wind most after we see how volatile violence can be to a mind ill-equipped to process it. This is the moment that should be driving the narrative and yet it occurs seventy minutes into an eighty-minute film. It explains a subconscious battle being waged within Todd, but it ignores clarity for closure.

My disappointment is therefore made worse because the capacity to be great is present. The ramifications of what’s being worked towards, however, are too expansive to be wrapped up with an abrupt bow and esoteric, bookended narration. We get what is trying to be said, but we also understand that it’s incomplete. While having the “best ending” for what’s on-screen (and in-screen considering two layers of artistry exist simultaneously) be the one where a victim’s trauma can’t help but keep his/her assailant alive is sufficiently and effectively bleak, its desire to silence the sufferer through that goal places the filmmakers in the exact same position of complicity their film appears to be vilifying. So in their quest to expose this truth, they’ve also unwittingly perpetuated it.

Random Acts of Violence will be available exclusively through Shudder starting August 20.