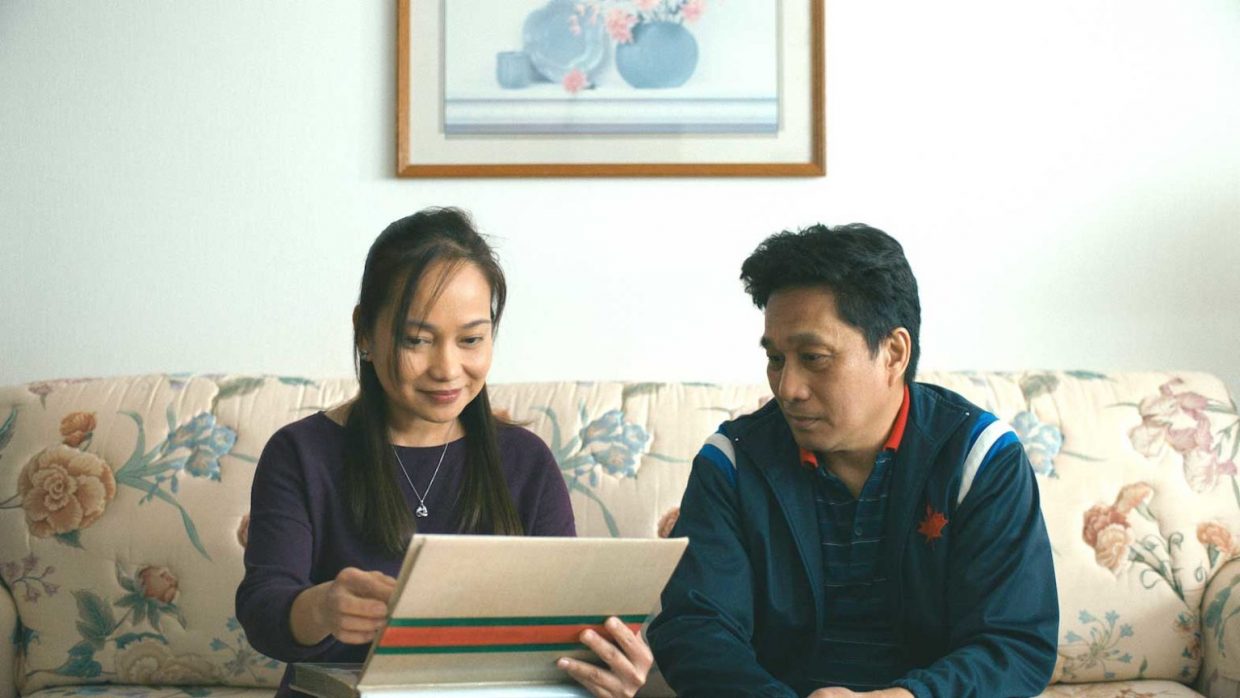 In Martin Edralin’s directorial debut Islands, the life of a shy, middle-aged Filipino man living in Canada gets a new meaning. What was once monotonous and lonely turns into a life full of hope. The man in question is Joshua (Rogelio Balagtas), a janitor at a university in Ontario. Back in the Philippines he was a dentist, but couldn’t get money for a dental degree in Canada. When not working, Joshua takes his parents, mom Alma (Vangie Alcasid), and dad Reynaldo (Esteban Comilang) to a Cha-Cha dance class. Then at night before going to bed, Joshua always prays to God to send him someone to spend the rest of his life with.

If it’s obvious Joshua doesn’t want to be alone his whole life, he doesn’t exactly do anything to change that situation. When co-workers invite him to dine out, Joshua turns their offer down. One day a tragedy befalls his family: Alma suddenly dies, leaving Joshua alone with his ailing father. Though his married brother Paolo (Pablo Quiogue) tells him to hire a caretaker, Joshua chooses to quit his job so he can look after Reynaldo himself––a decision he seems to regret as soon as he realizes how draining it is to take care of his dad.

Lucky for Joshua, his cousin, Marisol (Sheila Lotuaco), who happens to work as a caregiver, is visiting Canada from Kuwait for a few weeks and agrees to help him out a bit. But she’s not just there to be a lifeline, she also pushes Joshua to embrace his life again, showing him that it’s never too late to enjoy what’s around him. Marisol even teaches Joshua how to cook and tells him to go out again. The connection between the two is so precious that it makes the film feel warm and full of tenderness despite the premise basically being a family tragedy.

In a lesser film, Marisol’s presence in the narrative will only be defined by the growth in Joshua, but Edralin manages to avoid that pitfall by giving Marisol her own backstory. In the movie’s most touching scene, Marisol tells of her terrible experience being an immigrant worker in Kuwait, how her employer used to abuse her physically and mentally. Lotuaco might not be a professional actor, but we can feel the pain and trauma that she’s experiencing in this scene.

Balagtas’ understated turn as Joshua is also equally fantastic. Underneath the quietness, he knows how to show the suffering and loneliness of his character solely with his subtle facial expressions and intentionally awkward body movements. And these two natural performances at the center of the film, along with Edralin’s minimalistic directing style, give Islands a documentary-like feel. Instead of using dramatic musical clues or a gimmicky visual to emphasize the emotions the film is trying to display, Edralin keeps things low-key throughout. The camera is static, fitting perfectly to how stuck Joshua’s life is. The score is barely present, but it seems intentional in that it symbolizes Joshua’s loneliness. Aesthetically, Islands might not be challenging or even exciting, but each shot is there for a good reason.

What gives this film its distinction is how Edralin adds the Philippines diasporic context via small details. Joshua’s change of occupation from dentist to janitor, as well as Marisol’s tragic story, captures the professional challenge immigrants often deal with. Rather than make a big deal from it, Edralin seamlessly weaves that into the film’s main narrative. Islands might seem familiar at first glance––after all, it’s a tale about the power of human connection that’s been done and redone so many times before––but Edralin’s gentle and empathetic approach to both the story and his characters somehow makes it feel like a breath of fresh air.