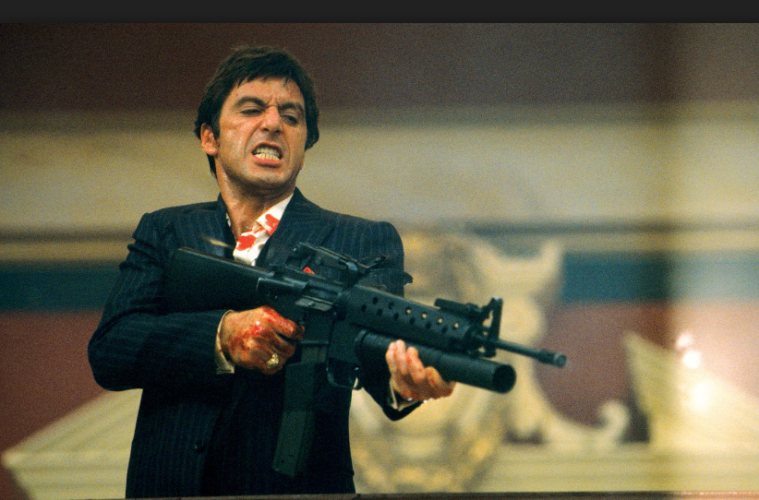 Growing up, certain movies exist as ideas long before you ever see them. You hear older brothers or parents whisper about this scene or that performance or that character, and, before you know it, the movie has become a part of you. Very few films achieve this status, becoming a specter in your life while still essentially unknown. It takes a skilled creator to make such a work, to craft a story or character that becomes a shorthand for an idea, to compose scenes that can be suitably evoked with a single word. The Silence of the Lambs is one such film, with the name Hannibal Lecter and the concept of fava beans or lotion in a basket becoming shadowy terrors long before you grasp their full meaning.

Growing up, one of the most fearsome phantom movies I ever allowed myself to create was Scarface. Because of the way that it had infiltrated the culture, because of how much of its story and dialogue had flooded daily speech and become almost archetypal, I had created a version of Scarface in my head before I ever saw it. And that movie terrified me. The invocation of a rage-filled “say hello to my little friend” while holding a gun. The concept of inhaling an overabundance of cocaine. The chainsaw scene. It was all too much.

Maturation is the slow confrontation of all of the things that scared you as a child, though, and so one day I had to face the real Scarface, as directed by Brian De Palma, rather than my own imagination. This was before I understood directors, the art of editing, the way sound and visuals co-mingle to create an idea in the viewer’s mind. When I had been hearing “chainsaw in shower” I had a very clear idea of what I was in for. Now, looking back on how I was then and how I saw Scarface for the first time, I can understand how De Palma helped introduce me not to movies, but to filmmaking.

Scarface has become such a cultural touchstone that it’s sometimes difficult to see the picture for what it is. It’s not just the movie that inspired a million pieces of college wall art. This is the quintessential American immigrant story as filtered through the lens of the Reagan ’80s and told by an absolute master of tone. This is a pulp gangster story told in the form of a grand epic, a remix of the high and the low that brings out the best of both.

Al Pacino deserves all of the credit he receives for making Scarface work, as it is his magnetic performance that anchors the narrative. For as much as he has become a punchline for letting volume and elastic facial movement do the heavy-lifting in his recent roles, Scarface shows Pacino at a perfect balancing point, using his overwhelming physicality to show the rage and passion within Tony Montana without tipping into camp. His is the well from which the human element of this movie springs.

But even with his powerhouse performance, it is still De Palma who is Scarface‘s real star and the reason it continues sending waves through the culture. It is De Palma who takes a character that ought to come off as cartoonish and vulgar and places him at the center of an aesthetic universe that somehow makes him seem like a victim of his own place within it. De Palma shoots the trappings of high living – decadent homes, mountains of cocaine, dance clubs, high fashion – in a way that makes them feel as though they are poisonous plants dripping from the trunks of trees in some dense jungle.

We track Tony’s entry into this world and see the hunger in him as he begins to find his way through the cocaine trade, willing to become more and more monstrous as he proceeds, but never failing to hold on to some essential, intimate part of himself. De Palma seems to understand that no one ever changes, even as their circumstance does. What the acclimation of power and wealth means for Montana is that his desire can now be sated, and his need to act in a way different from how he would like is thus diminished.

Let us not forget that his innate compassion for children – or people who he views as being innocent, like his sister – is the reason for his downfall. De Palma roots the fall of the man in the man himself, not some existential threat from without that cannot be changed. Not by fate. De Palma believes in the intensity of human agency.

This is how he takes a film that could have been just your average story of a rise and fall and makes it something more. This is also why that phantom movie never could live up to the real thing. De Palma makes choices that the average narrative engine never would. It makes a monster who is more monstrous because of his humanity and his softness. In that chainsaw scene, De Palma cuts away from the act of violence to focus on Tony’s reaction, letting him bear the brunt of the horror for an audience. The same is true of Scarface as a whole. As Tony himself says, everyone wants to be able to point their fingers and say, “That’s the bad guy.” De Palma’s gift is that he can do this while still remembering that, under the right circumstance, a finger could be pointed at anyone.