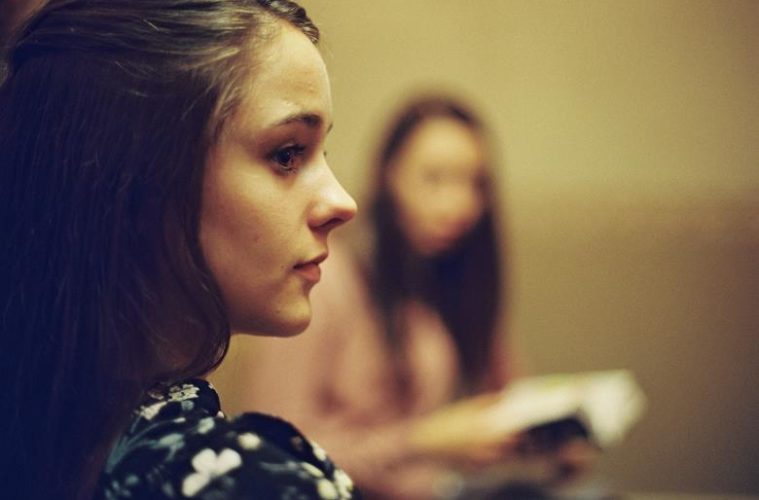 A central scene in Apostasy, the powerful debut from British director Daniel Kokotajlo, has a group of kids stage a re-enactment of King Solomon’s judgment, the parable from the Book of Kings. In the story, the king concocts a plan to settle who is the true mother of young boy. He says he’ll cut the child in two, dividing it among the two women. The true mother, of course, is declared after she says she’ll give up the baby. The king knows this because no mother would kill her child.

The story echoes disturbingly through this compelling drama, set in a close-knit family of Jehovah’s Witnesses. The clan’s beliefs mean they refuse hospital treatment (as seen in another fall festival picture, The Children Act), and the mother here places her trust in religion that could compromise her daughter’s life. The conflict at the heart of the movie — which never seeks to denigrate Jehovah’s Witnesses beliefs (although it certainly robustly challenges them) — is that every believing family may one day choose between their uncompromising philosophy and their children’s health.

The well-being of the youngest daughter Alex (Molly Wright, beguiling in her debut), is threatened by anaemia, a condition in which accepting treatment – blood transfusions – would be against her church’s doctrine. Alex’s mother Ivanna (an excellent, Nurse Ratched-esque Siobhan Finneran) is crystal clear in her belief that salvation won’t come from medicine, but in faith. “That’s just your opinion,” Ivanna barks at a doctor offering her daughter medical advice, in a chilling echo of today’s anti-science sentiment.

The elder daughter Luisa (Sacha Parkinson) is the first in the family to have misgivings, and her unexpected pregnancy leads her to be “disfellowshipped” from the religion (three older, male ministers — “elders” — administer this punishment). Ivanna brings up her daughters on her own; the absent father is never mentioned.

Writer-director Daniel Kokotajlo was himself a former Witness, and his own extrication from the group when he was 21-years-old surely gives him perspective on the methods the Church uses to disavow and undermine former members. Jehovah’s Witnesses are visible in society through door-knockings and leafletting in stations and shopping centers, but little is known by outsiders of the group’s beliefs, rigid traditions and practices. That’s partly the aversion Jehovah’s Witnesses have to contact with outsiders – they aren’t allowed to marry outside the group, for instance – and it might alarm outsiders that a seemingly conventional religion might subscribe to practices more associated with Scientology.

With Luisa’s disfellowship, and – like Chekhov’s gun – the inevitable reappearance of Alex’s illness, Kokotajlo captures a real claustrophobia, a tangible existential fear that takes hold of this family. Set in a bleak northern English town outside Manchester, the religion is an enticement, where communicating “The Truth” serves to take them to heaven in the next life, the “New System,” and you can forget about this one. Once you subscribe for so long to these ideas and this ideology, it would threaten your very identity to leave.

Finneran plays Ivanna as a strict, god-fearing mother, and Kokotajlo clearly understands that religious belief is hereditary, passed down in from parent to child. A clever visual device the director uses is to show the daughters prayers as vocal conversation, as if talking to your god is as normal for believers as talking to anyone else. But no matter how pious Alex is, no matter how much autonomy she has in making her own decisions in life – she turns 18 at the start of the film, significant in being able to decide your own hospital treatment – this is a belief that, right or wrong, has been indoctrinated by her mother.

Even after a terrible tragedy, it takes time for Ivanna to start to question her beliefs, but it’s rather a relief to see Kokotajlo not succumb to the narrative cliché that Ivanna might actually leave the faith. Instead, it’s the functions and the structures that lead to her concerns, and traditions that arbitrarily make her relationships with those she loves most – such as her outcasted daughter – so troubling. While not belittling individuals who take up the faith, Kolkotajlo ruminates on the arbitrary sacrifices people, particularly women, make. Indeed, anaemia, which cannot be treated under Witnesses rules, is a condition that overwhelmingly concerns women rather than men. And as daughter Luisa raises in anger towards the film’s conclusion, there is no mention of blood transfusions in the bible.

As a religion which bans blood transfusions, it seems Jehovah’s Witnesses are obsessed with blood and purity, as Alex knows to her shame when – against her mother’s wishes – she was given a blood transfusion when she was born. It’s an indignity that makes her feel unworthy of religious salvation. It’s these kind of pernicious, arbitrary doctrines that the film dwells on.

Jehovah’s Witnesses may subscribe to a fire-and-brimstone rhetoric, but Kokotajlo’s film is almost unnervingly restrained, with cinematographer Adam Scarth contrasting a bleak palette of industrial England with brightly-lit interiors of the Witnesses’ church. Kokotajlo’s careful control of tone and setting is disquieting – this is a film where conflicts are hidden beneath the surface, bubbling away, revealed only when this family’s rigid beliefs boil over with devastating consequences.