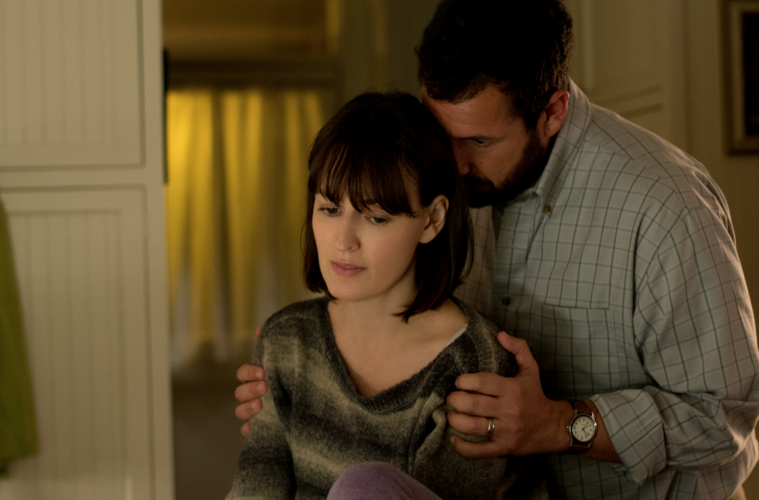 Premiering at Toronto International Film Festival last month, Jason Reitman’s Men, Women & Children (read our review) is now arriving in theaters this weekend and we had the chance to sit down with two of its stars to discuss the project. Rosemarie DeWitt — who we said “is stunning as the complacent wife seeking sexual adventure” — and Kaitlyn Dever — who we noted has a “calculated rebellion that never stretches too far towards transforming into something she’s not” — both opened up to us about the film. They discussed their characters, relatability, living virtual lives in today’s world, the challenges both faces in the project, what they hope an audience takes away, and much more. Read the interview below.

Many have noted how relatable Men, Women & Children is. How well do you think people will relate to your characters?

Rosemarie Dewitt: She in a lot of ways feels like an every woman, especially the every day woman who is stuck in a cubicle or feels a little bit boxed in by her life and her identity. I think even more maybe than who she is on her own, I think who she is in her marriage people may really relate to. I think long-term monogamy is a tricky prospect for a lot of people. As a society we very much believe in marriage and we know that it’s quote, un-quote difficult to sustain all the romance and spontaneity and the sex life and what not. But I think these two people have come to a place where it’s kind of like a plant that hasn’t been watered — you know one of those ones that’s in your corner in your front porch and hasn’t been watered in a really long time. It’s literally dying unless it gets oxygen and water. Somehow going on the Internet and typing something as simple in the subject line as “I want to know what it’s like to enjoy sex again or feel beautiful” takes her down a big rabbit hole. And ultimately I think does bring oxygen to the marriage.

Kaitlyn Dever: I am very lucky to have been offered the role as Brandy and been given the chance to portray her, so going into it I wanted to make it the best it could be. So those [climatic] moments in the film, you know of course Jason wanted it to shine through, but me as well, I really wanted to make those moments true. So the scene with me and Jennifer, we had to get mad at each other and it was very hard. We had been so nice to each other and she’s such a nice person that it was really hard for us to get to that angry point, and then she was apologizing to me afterward. That was kind of a funny thing. I think the audience will react in many ways. I feel like some people will come away with it like Jennifer Garner’s character was totally in the right, or sometimes they’ll think she was crazy and shouldn’t have been like that. I think there would be so many different reactions. How do you think the audience will react to the idea of an affair arranged online?

Dewitt: I don’t know, that’s a good question. You know it’s funny because when I was reading the script, like when you picture yourself doing it and you picture yourself in these very intimate scenes or sex scenes, you start to feel very nervous. It feels like a big deal to do it, and you also can’t imagine that anyone does it, especially like a website like “Ashley Madison” that people say, “OK. We are both here for an affair,” but apparently they do. I think this movie is very good at showing the lead up to why people do it, because you feel it — even if you don’t see a big backstory on people, you feel that point in life where you just need more. You need more connection and you need to express yourself more and you need more satisfaction. Then the big question is, for all of the characters, is how do they go about it?

Piggy backing off that, it feels like the movie is trying to portray how virtual lives and the Internet can actually push people apart. Have you ever experienced that in real-life?

DeWitt: Not first-hand. I more see it with girlfriends of mine who are in the dating scene and how relationships kind of die by texting. It does not feel like a really effective, intimate way to progress in a relationship. In any relationship I think there’s just so much room for misunderstanding because at this point technology can’t convey human emotion. Like what do you call those… emojis? Well they were really funny in the movie with the girls going back and forth and we did clearly get their emotion, but if you’re trying to get more subtle than that such as, “I just don’t know if I’m feeling this right now.” That could mean a lot of different things. It could mean I want to be feeling it, I’m kind of feeling it and not sure. If you’re sitting in a room with someone it’s your hand gestures, the way you squirm in your seat. I know before technology and maybe even now, a lot of people still have that need to see people face-to-face. If you were worried about infidelity you want to confront that person so you can see the look on their face. That stuff is missing from these kind of exchanges, so I don’t know where that leaves us, but that’s just how it is.

Dever: Yeah, I don’t know, that’s a tough question. I definitely think that there’s something interesting about how I can see someone, someone I know, on Instagram or Twitter and they post pictures or write stuff and it’s not really them or the person that I know. So, I feel like that is very interesting. The world is changing at such a rapid pace. I don’t think there’s any reason why the world would be turned down by the Internet but we’re just going through the motions and trying to figure it out ourselves.

Rosemarie, what challenges did you face preparing for your character?

DeWitt: You know the biggest challenge for me was just that I was really scared. Jason did it so so tastefully with the date scene with a secret lover, but I was really scared about it. And it’s funny because he teases me now and is like, “Oh, you know me so well,” meaning that he makes these movies that are really exploitative or something and they’re totally not. But it just felt so vulnerable making that. Also just to say those things and know you’re going to be filmed and sit in an audience with 500 people and listen to yourself say that. Oddly, or not oddly, he used sort of the most restrained takes and everything was very delicate. It never, to me as an audience member, felt dirty.

Kaitlyn, your role as Brandy is pretty different from your previous roles, especially your performance in the American Girl movie, how did you decide you wanted to play Brandy?

Dever: Wow, the American Girl movie, that’s a throwback! I wanted to play her just because well the story is so different. You don’t really see stories like this, or even read about it either. So I feel like that in it of itself was something that really stood out to me. When I read the script, something that also stood out was just the characters in the film and how they have tons of specific stories and story lines and so I feel like in choosing this role — well, I didn’t really choose it, I got the script, I read it, and I loved it, and I worked really hard to get it. I wanted to do the best that I could. Brandy has quite the overprotective and overwhelming mother, how do you think teenagers in the audience would be able to relate to this?

Dever: I think in this movie there are a whole bunch of characters so that when someone will watch this, there will be someone they’re going to relate to in this film. Whether it’s just one person or two people or three people, this film is very, very relatable and shows just a broad spectrum of what the world is like right now. But I think that kids my age and teenagers will be able to relate to my character because there are people out there who feel trapped and want to become someone else — someone else online rather. That’s what Brandy is struggling with, the fact that she is being hovered over by her mom and she feels like she is trapped basically. It’s sad, but Jennifer and I were talking about this because she comes from a very good place. She wants to know if I’m safe. She wants to know that I’m not doing anything bad on the Internet which is good, and she wants to know that her kid is OK. There’s that boundary that parents have a tendency to cross.

If the audience could take one thing away from Men, Women & Children what would you hope that could be — an idea, message, etc.?

DeWitt: Just a conversation. Right before you walked in we were all sitting around here talking and I looked at them and said, “God You know guys, I’m so sorry this conversation got so heavy,” and someone said “I think it’s the movie.” Because all last night and all of today we just kept talking about when we were kids and what we were doing. For some reason it’s provoked a lot of conversation, so whether people loved the movie or hated the movie, it would be cool for them to not just be like, “Where are we going to go to eat?” when it’s over. And I do feel like the success of this movie is that you don’t. You’re kind of incapable of just tuning out when it’s over you have to talk about it.

Dever: Me and Ansel [Elgort] were just talking about this. Someone had asked us what the main message of the film is and that was actually a really hard question to answer because there’s so much to this film that there’s not just one message to send or one conversation to be had. There are multiple conversations and multiple messages, so I would hope there’s not just one. That’s what it truly was made for because it makes people really think and it’s a slap in the face a little bit.