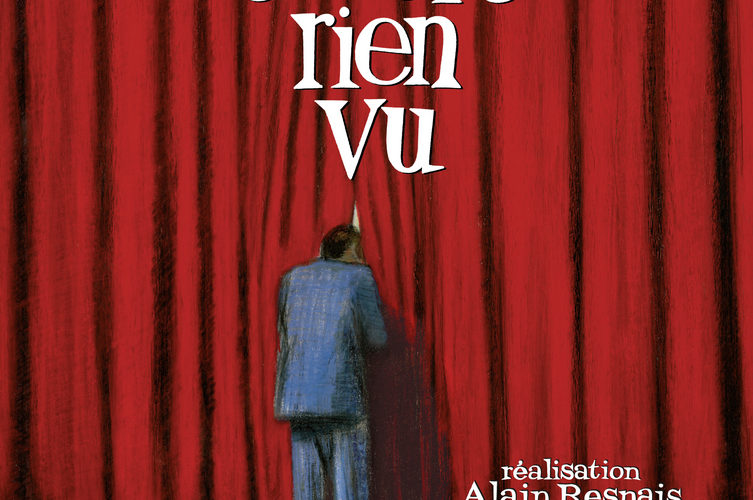 [Review] You Ain’t Seen Nothin’ Yet

Few titles in recent memory have, at once, demanded as much from and given such riches to its actors as You Ain’t Seen Nothin’ Yet. Treating the company of performers with an equal balance of reverence and faith, the recently-turned-91 Alain Resnais’ most recent feature demands the occupation of multiple spaces and tenors within a single scene, sometimes in continuous shots, all the while reciting large quantities of dialogue which mingle the nature of their craft with character-to-character relationships that, themselves, skirt an unsuspectingly thin line between the personal and the fictional.

No matter how taxing this may have proven for its slate of French acting elite, the greatest sleight of hand You Ain’t Seen Nothin’ Yet can lay claim to is how smoothly it transposes the litany of ideas into a workable, cohesive whole. For every potentially esoteric aspect that Resnais will come to approach — including deceit in performance; the performances required of deceit; relationships between actors, their characters, and the audience — there is an equal, fundamental kernel of textual insight or translucent humor that is directly connected to at-hand proceedings. Resnais is not demanding that a viewer detour at the note of any and every reference to careers, works of theater, or any other such sort reaching the forefront; it would seem, rather, that he prefers us to bask in overpowering vastness. The task begins with a 13-person assemblage — if you’ll give yourself a few seconds, starring as themselves: Mathieu Amalric, Michel Piccoli, Lambert Wilson, Pierre Arditi, Michel Robin, Andrzej Seweryn, Michel Vuillermoz, Hippolyte Girardot, Anny Duperey, Sabine Azéma, Gérard Lartigau, Jean-Noël Brouté, and Jean-Chrétien Sibertin-Blanc — who, in a flawlessly composed and cut introductory sequence, are called upon by a recently deceased, playwright friend to convene at his home. Once arrived, the man appears on a television screen, announcing his now-posthumous intention to have the group observe Eurydice — a production which they had all partook in during their early days — carried out by young actors. Soon, however, these men and women are so compelled by reignited memories that they begin performing the play for themselves… outside the presentation? Inside it? Supplanting the act altogether?

Indulging in a multi-layered composite narrative like so, You Ain’t Seen Nothin’ Yet flows on a mysterious internal logic which can quickly recall the dream mechanics of Resnais’ most well-regarded accomplishment, Last Year at Marienbad; though as a work more concretely concerned with the act of storytelling, the mysteries residing herein yield a stronger sense of center and resolution. In all truth, they may appeal to one’s personal cinematic concerns more profoundly. Once Resnais has put every last piece into motion, his most remarkable tactic is revealed: level after level of diegetic action opens upon itself, springing forward to consistently renew a sense of structure (somewhat expectedly) akin to a Russian doll. It’s not at the expense of sincerity, either: while the cutting between stationary actors and “acting actors” is not without a disorienting impression, these gestures communicate serenely in their seeking of emotional truth.

The structural echoes of prior work aside, You Ain’t Seen Nothin’ Yet‘s digital photography marks an entirely new step in Resnais’ career as a technical formalist. Little about basic approach would appear to have changed in significant manners since his prior effort, Wild Grass, but, like the greatest practitioners of digital cinema before him, Resnais mines seemingly indomitable aesthetic characteristics to extend a thesis. The quality of appearance does not offer to replicate so much as it asks one to approximate, and, as with titles of these aforementioned masters — David Lynch’s Inland Empire and Michael Mann’s Miami Vice & Public Enemies spring immediately to mind — You Ain’t Seen Nothin’ Yet‘s visual expounding of textually explored imitation fuses form and content, the accumulative effect positing a strong argument for the justification of a debatable format.

If, in their final moments, proceedings feel to have settled down with a more quiet and brisk coda than a preceding 110 minutes would otherwise suggest, it is not without the sense that little else needs to be proved. Perhaps it’s fitting for a tale concerning itself with the death of an artist: there is, after all, little time left for Alain Resnais, a cinematic practitioner who has not needed to provide any form of warrant since Hiroshima mon amour. To have nevertheless vaulted down new avenues with the aplomb of a young man is, like his own picture, remarkable.

You Ain’t Seen Nothin’ Yet will open in New York City on Friday, June 7th.