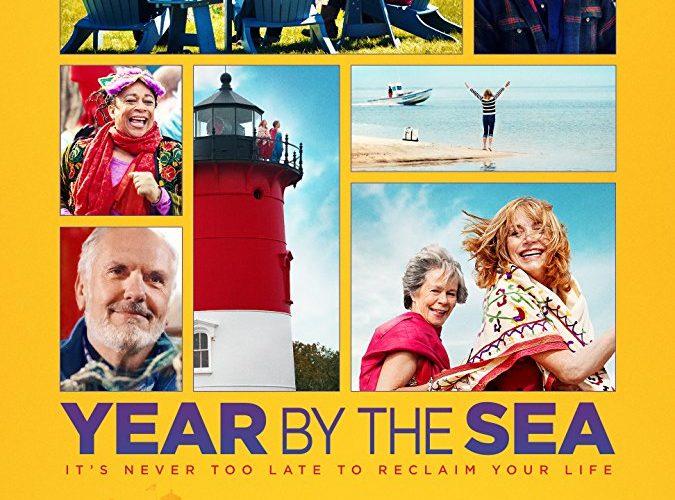 Review: ‘Year by the Sea’ Provides Karen Allen with a Complex, Layered Performance

Thirty years of marriage have turned Joan Anderson (Karen Allen) into “a mother and wife,” her sense of who she was before kids and marriage having almost vanished. When her husband Robin (Michael Cristofer) announces he has taken a job in a different city, and her kids have left for college, Joan decides it’s time to find out who she has become and takes off to Cape Cod for a year. There, not only will she fall in love with herself all over, but she will write her memoirs and get a stronger sense of who she is as a creator. If the plot of Year by the Sea sounds by-the-numbers, it may be because Anderson’s bestselling memoirs have served as the structure for many other works of fiction in which women of a certain age begin new endeavors in remote places. Whether they’re hotels for retired people, restaurants with exquisite world cuisine, or schools for the less fortunate, these projects breathe new life into these characters who regularly find epiphanies materializing in front of them.

The difference in Year by the Sea is that Joan doesn’t set out with a specific project in mind. When she leaves Robin, she has no clue of what she’ll do or the challenges she’ll face. In fact she doesn’t even end her marriage, something we don’t learn until later in the film, and it’s in this very vagueness that the film finds its heart. Since Joan doesn’t know what awaits her, her wandering becomes less about trite “autumn of life” lessons and more about coming-of-age. Joan’s indecisiveness, her sense of wonder, and her need to discover herself have much more in common with stories films usually reserve for teenage boys, rather than women over 60.

Joan’s peculiar kind of charm is mostly owed to Allen, who gives what might be the most complex, layered performance of her career. The actress became famous for her work as Marion Ravenwood in the Indiana Jones films, in which not only did she hold her own magnificently next to Harrison Ford, but also defined the kind of spunky heroine Hollywood has failed to emulate in the years since. Allen’s warm smile and distinctive voice remain the same, but there is a new spark in her eye that announces decades worth of wisdom and experience. Even if we don’t see her battling villains in exotic locales, she’s able to capture decades worth of anecdotes with a simple glance. Allen’s exceptional choices share their subtlety, which surprisingly say more about Joan’s literary abilities than a cliché speech would.

Joan’s closest friends are played by S. Epatha Merkerson and Celia Imrie, the three of whom make us wish we could see an entire television series about their friendship. Year by the Sea’s major flaw might be that it captures life’s changes without flair or excessive drama. It’s not a film trying to show the extraordinary in the mundane, but rather create a space for characters like Joan to figure out what they can become. Director Alexander Janko doesn’t reinvent the wheel and his work is competent if not particularly inventive, he recurs on music cues too much and too often. The soundtrack is composed mostly of songs by indie band The Weepies, whose twee melodies are catchy enough to distract from the plot, failing to ever say as much as one of Allen’s gentle looks.

Year by the Sea is now in limited release.