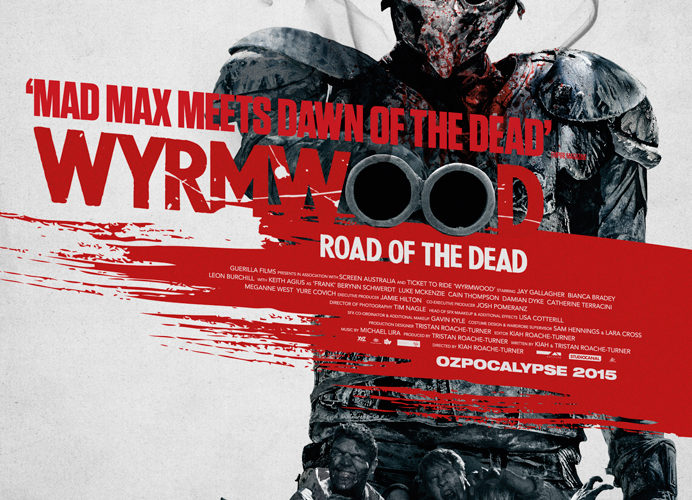 [Review] Wyrmwood: Road of the Dead

Let’s face it, the world needs another zombie movie about as much as it needs another post-apocalyptic road movie. To their credit, Australian brothers Kiah and Tristan Roache-Turner realize that. With their anything-goes debut, Wyrmwood: Road of the Dead, the audacious siblings have fastened sparkplugs on both of those sub-genres. They’ve laughed in the face of tempered expectations and covered its body in crimson-red goo. A horror-comedy with more energy than a kangaroo on uppers, Wyrmwood avoids falling into genre pastiche by never sitting still long enough to become one thing. The Roache-Turner brothers’ film’s manic nature has it volleying around back and forth between a living-dead thriller, a self-aware laugher, and the kind of overboard splatterfests Peter Jackson used to make. The combination of those genre elements delivers the most enjoyable zombie movie in years and the funniest the-world-is-over romp this side of This is the End.

Wyrmwood is the latest in a growing trend of Aussie siblings making horror films as their calling cards, following Michael and Peter Spierig’s similarly frantic zombie flick Undead (2003) and Colin and Cameron Cairnes’ ultra-gory 100 Bloody Acres, yet Wyrmwood is the best of the Outback bunch. Directed by Kiah Roache-Turner and co-written by he and Tristan, it follows the brother/sister duo of Barry (Jay Gallagher) and Brooke (Bianca Bradey)—he’s a familyman living with with wife and young daughter, and she’s a Goth photographer who arranges morbid shoots with her two equally beautiful and edgy girlfriends. Simultaneously, both of their lives are upended by an unexplained outbreak of reanimated corpses, causing Barry to open his wife’s and daughter’s skulls with a nail gun and Brooke to drive a shovel through her flesh-craving pals’ faces. What happens to each sibling after they’ve offed their respective loved ones gives Wyrmwood the narrative drive it needs to become a one-sided rescue mission for Barry. After mowing down several zombies and having his head slathered with the blood from a fellow human’s blown-off dome, Barry reluctantly joins forces with Benny (Leon Burchill), a lovable Aborigine with a knack for saying the most charmingly idiotic things at the worst possible moments. The zombie-decimating odd couple quickly cross paths with a couple of hardcore survivalists, where they’re introduced to metallic protective gear, an arsenal of guns that’d make T.I. blush, and a few new ways to utilize the zombies’ blood. Looking like a slightly militarized GWAR just as much as they earn Wyrmwood’s common descriptor of “Mad Max meets zombies,” Barry and Benny’s second-act transformation into a pair of steampunk bad-asses signals Wyrmwood’s first official deviation away from the norm. It’s the moment where the brothers Roache-Turner really let loose.

From then on, Wyrmwood continually finds clever ways to tweak zombie cinema’s popular conventions. The filmmakers’ unhinged imaginations take over, proving that a little ingenuity, not to mention a lot of blood, goes a long way. While Barry’s becoming Zombie Slayer No. 1, Brooke’s being held captive by a mad doctor of sorts, bound inside a decrepit medical facility with her arms tied above her head and a contraption over her mouth—a gangly, hilariously on-the-nose menacing scientist in a yellow hazmat suit repeatedly injects her with zombie blood. The result is that Brooke turns into a sort of “zombie whisperer,” able to control any ghoul that’s in her vicinity—it’s an idea so simple that you can’t believe it’s never been done this way in a zombie movie before. The same can be said for how Barry’s storyline reinvents the genre. By accident, he discovers that an undead creature’s blood is flammable, and, even better, it can be used as gasoline. The Roache-Turners get a nice amount of mileage out of this narrative curiosity, going so far as to having Barry trap a couple of walkers in his truck’s back compartment, stick hoses into their mouths so they can drool blood into the gas tank, and using them to power his rig towards Brooke’s location.

Without ever taking a breath for any quiet expository scenes or distractingly unnecessary subplots, Wyrmwood is the admirable kind of genre movie that knows exactly what it’s supposed to be and constantly abides by its own kitchen-sink principles. Granted, entering it with an established fandom for either zombie movies or over-the-top horror-comedies is beneficial; critics and moviegoers unaccustomed to embrace this kind of madness won’t be convinced otherwise—an Aussie crossover breakthrough like The Babadook, it’s not. But don’t let the Roache-Turner brothers’ debut’s garish veneer push you away if your idea of “too much” is epitomized by Rick Grimes stomping out a flesh-eater’s cranium on The Walking Dead. The-dead-have-returned entertainment hasn’t been this much fun since Zombieland.