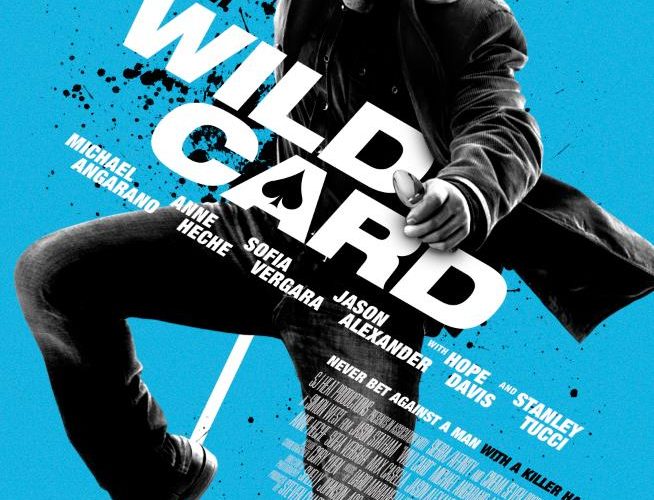 How many Jason Statham movies does this make? Over the last decade or so, the star has become a staple of the mid-winter/late-summer release windows. His mid-budgeted action-dramas are almost always as accessible as they are forgettable. His new film, Wild Card, directed by Simon West and released simultaneously in theaters and VOD is no different.

Once slated to be directed by Brian De Palma, the film is a remake of the 1986 Burt Reynolds-starrer Heat, which was written by William Goldman based on his 1985 novel of the same name. Goldman’s back to write the update, and the film runs along at a lean 92 minutes — 85 minutes not including end credits.

Statham has perfected the art of the tough guy with a heart of gold, and the hero he plays here – the aptly named Nick Wild – is the nicest tough guy in Vegas. Early on, he helps out a balding buddy of his impress a beautiful woman (Sofia Vergara, blink and you’ll miss her) for 500 bucks. When his buddy comes to pay up, he offers Nick an extra 500 dollars for a job well done, and Nick refuses. Not unlike his character from the Transporter series (or really any movie he’s ever made), this is a man with principles. He ultimately takes a job with a young millionaire named Cyrus Kinnick (Michael Angarano, growing into quite the character actor) to be his bodyguard-of-sorts as he runs around Vegas gambling.

When an old friend named Holly (Dominik Garcia-Lorido) comes calling, Nick’s life gets complicated. She’s beaten to a pulp and looking for revenge against the men who did it; one man in particular, a gangster named Danny DeMarco (Milo Ventimiglia, a master of slime). Nick initially refuses, then Holly reminds him it was she who picked him up from rock bottom not too long ago. See, Nick has something of a gambling problem. With relative ease, Nick dispatches of Danny and his goons, collecting 50 grand in the process. After splitting the money with Holly, he lives at the blackjack table for a night and a day, his favorite dealer Cassandra (Hope Davis) watching him win big and then lose bigger.

This is a snappily-edited film that finds a surprisingly solid middle-ground between fast action and gangster melodrama. As Danny runs down Nick in the third act, Cyrus becomes something of an un-needed sidekick. Not unlike the original film, there’s seems to be far too much going on in an hour and a half, most of which barely matters to the central narrative. That said, its these asides that allow for fun cameos from great actors, especially one from Stanley Tucci towards the end.

Once upon a time, there were plenty of hard-working leading men who sported the same positive traits: good looks, great physique, natural charisma and a smidgen of dramatic weight. His output may not always shock and awe, but it’s nice to know we still have Statham for our rainy Saturday afternoons.

Wild Card is now in limited release and on VOD.