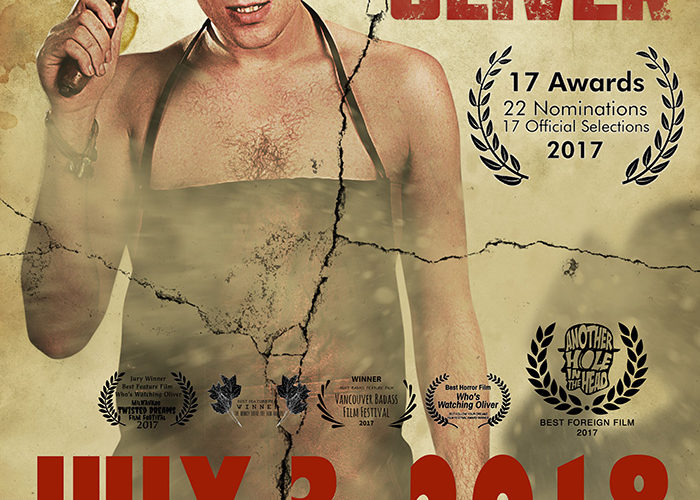 To think about a romantic serial killer thriller is to conjure thoughts of Natural Born Killers and its duo of equally despicable characters. It’s easy to believe two psychopaths can fall in love because they share a predilection for violence no one else would. But just because they accept each other’s monstrous desires, any potential offspring wouldn’t automatically follow suit. This son or daughter would possess the agency to fear his/her parents and pray for escape. The parents would obviously work their twisted psychological claws into his/her skin, destroying his/her sanity if they cannot erase the pesky soul preventing full acquiescence. What’s left is a broken figure desperate for connection and warped into thinking Mommy and Daddy are its sole purveyors. He/she becomes a slave to their whims.

This is the position director Richie Moore and his co-writers Russell Geoffrey Banks and Raimund Huber give their titular character in Who’s Watching Oliver. Oliver (Banks) initially seems like a troubled, mentally disabled British transplant in Bangkok who Skypes his mother each day to check-in and bashfully clam up when asked about girlfriends. He stumbles through his words and mumbles to himself while walking his Thai streets with a manual camera in-hand, always finding his way through a secret entrance into the Dream World amusement park for a much-needed breath of fresh air. What we soon learn, however, is that this reprieve provides the necessary quiet to unpack a chaotic mind cultivated by a domineering Mama (Margaret Roche) who demands regular evenings of vicarious rape and murder.

The question is whether you can look past his fulfilling Mama’s requests with random women cajoled to his apartment with drugs and/or money to see the revulsion he feels. Moore and company hope we accept Oliver as a victim himself—a puppet whose strings have been pulled for far too long. This lack of control stems from his owing her a debt thanks to an act of “heroism” that manipulated him to love her enough to voluntarily debase himself at her command. But we’re not certain he knows better since his slack-jawed lethargy is as plausibly a physical impairment as the product of self-medication. We might, however, be able to show compassion if Oliver were able to find the strength to fight back against this very real demon.

This possibility only arises if the film remains dramatically sound in its horror trappings. We must accept a level of authenticity to look past the heinous crimes he commits and acknowledge the heinous crimes that were committed against him. That’s difficult to do when we can’t help laughing at Mama’s cartoonish delight stoking a fire of irreverence via Oliver’s computer screen while watching his carnage. It’s difficult too when every visual montage of his daily routine comes with a poppy soundtrack lending them an absurd façade towards comical flights of fantasy within Dream World’s self-proclaimed “World of Happiness.” Who’s Watching Oliver is often too busy trying to be campy, surreal fun that its dark psychological backbone becomes subverted. We can’t simultaneously pity his plight and enjoy his rage.

And that leads to the most captivating, confusing, and successful piece of the whole: Sara Malakul Lane’s Sophia. Outside of Oliver’s extensive turmoil is this beautiful woman arriving out of nowhere to test his devotion to Mama. When we meet her we blindly assume she’s just going to be another of his targets to assist his mother in her live stream carnal pleasures because we’ve yet to realize Dream World as his sanctuary. She approaches him as he stares into space to decompress from the previous night and prepare himself for the current one. She smiles; never laughs at his antisocial, Autism-spectrum demeanor; and legitimately hopes to break through his emotional barriers and trust issues for honesty. Her inclusion is so wildly incongruous that we must question it.

Is she a cop undercover to catch him in the act? Maybe she’s an admirer of his killing style who seeks an up-close vantage point for inspiration. Or perhaps she isn’t even real—a figment of his imagination manufactured to supply hope in the darkness. We find ourselves numb to Oliver’s nights of debauchery because they merely make up the secret that will seal Sophia’s fate once she inevitably stumbles upon it. We want him to kill because each new victim could be the one that forces the confrontation we have been waiting for. How will Mama react to there being a woman in her son’s life that he refuses to defile for her? And what about Sophia’s own rough past allows her to see Oliver as worth her love?

That last one is crucial to what Moore and company is doing because I think their goal is to expose the nurture aspect of monsters. How does one’s upbringing infer upon his/her capacity for remorse and how much weight does their intrinsic nature hold to combat it? We see this theme running throughout the film, but it never feels like more than an afterthought to the gore. Sophia’s past is undercooked and Oliver’s malice often unleashed in ways that prevent us from caring about his redemption. I wanted to contemplate their situations’ complexity, but found the comedy too distracting. It would be fine on its own because I like a good self-consciously campy horror flick. But to also attempt broaching such intense psychological subject matter with it? Sorry.

It’s too bad because Who’s Watching Oliver could have worked in either direction alone. It could have excelled as an over-the-top exploitation horror comedy reveling in its immorality, blood, and nudity. And it could have truly captivated in its character study of a killer with a soul warring against his involuntary indoctrination thanks to a love he never thought he could have. Roche plays Mama firmly attuned to the former while Banks and Lane speak in hushed tones with melancholic expressions to support the latter. The whole does look good and has some seriously painful (in a good way) sound design when Oliver falls prey to his psychotic episodes, but the message itself lacks the focus necessary to shine beyond displaying everyone’s artistic promise for the future.