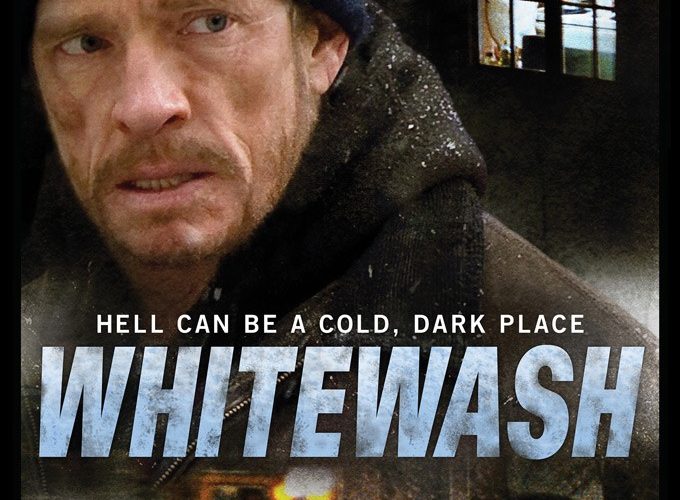 The frozen, gray confines of a forest in Quebec become an unstable purgatory for hapless Thomas Haden Church in Emanuel Hoss-Desmarais‘ darkly comic Whitewash. Juxtaposed somewhere between the droll fatalism of the Coen bros and the survival drama of Jack London, Hoss-Desmarais‘ film makes great use of Church, who bolsters and solidifies what is often a one man show. Although it careens precariously from the present to the past, from apathetic, abiding sanity to determined, barking madness, Whitewash is that uncommon small-scale indie that grows larger the deeper it sinks into its hero’s troubled mind.

The trajectory of Church’s Bruce seems drastically limited after the film’s bewildering open scene. Intoxicated and seemingly irate, Bruce is hurtling through the snowy streets on his mini-plow when he runs a man down and then carries away the body and buries it. When he flees into the woods, he ends up crashing the snow-plow and is too drunk to find his way back out. As we soon learn, there’s more to Bruce’s wintry exile—and his crime—than just alcohol-fueled happenstance. There’s a stark, humorously glum dream logic to watching Church adopt a crazed hermit existence in the wilderness, before the film circles back and introduces us to the genesis of his current misfortune, meeting the man he’s just killed.

As it turns out the victim of Church’s crime—the intentionality of which remains ambiguous—was a man named Paul (Marc Labreche), who was crashing at Bruce’s place during the time of the accident. The relationship between the two is formed in flashbacks as Bruce saves Paul first from suicide and then plays Good Samaritan until the latter’s shady behavior and parasitic attitude start to grate on the former’s weary resignation. They have both been through hard times, Bruce sees that and wants to help, but how then, has he arrived here? Alone, hiding and having left Paul’s dead body in his fleeing path? Were Whitewash any kind of conventional thriller, these questions would be the ultimate crux of its interest. Refreshingly, that’s not the case, and watching Church become unglued in both mind and spirit becomes the entrancing centerpiece of Whitewash. The film obviously belongs to Church, a gift to an actor who’s specialized for years in rough-around-the-edges fringe-dwellers who seem to subside on drollness as a coping mechanism. He makes the most of it too, wearing Bruce’s hard life and choices nakedly on his craggy, expressive face. By focusing on Bruce’s survival in the forest, the movie gains an immediate and grounded identity, but those jaunts back into the past keep calling things into question. It’s a tricky piece of performance for Church to navigate, as he’s forced to untangle several competing facets of Bruce; the unhappy, unemployed drunk before Paul, his role as unwitting sponsor to a snake, and the guy who’s facing death and likely insanity in the here and now.

Hoss-Desmarais does great helming work here, and one of the most interesting things he accomplishes is taking a focused, fastidiously planned production and making it feel reckless, uncertain and tipped on the brink of collapse. The fact we can barely differentiate whether we are watching a comedy or a thriller is in the picture’s favor. Scenes of Church cooking steaks and potato on the hood of his derelict plow, all of it a possible mirage in the mind of a starving man, or narrating his own peep session on a nearby family take on a certain, unhinged dignity when filtered through Church’s performance. There’s not much pride or illusion left in Bruce’s life by the time he’s taken up residence in the snow, and the filmmaking reflects his stripped-down mental agency through its setting and editing. We are so snuggly fit into this man’s receding worldview that every new wrinkle of awareness roughly registers.

It’s easy to talk about Whitewash and its seemingly dreary focus and forget that one of the best things about it is its own substantive sense of humor. This is more often a comedy than a thriller, even if that sense of mirth borders on occasionally pitch-black. Contrasted against the solitary scenes of Church playing off of his own internal voice, we have another moody and perfectly calibrated performance, this one by Marc Labreche as the conniving gambler, Paul. The chemistry between Labreche and Church is infectious and infected, and as the movie delights in setting these guys up for hard knocks, the audience delights in their mutual exasperation.

This is a curious but spirited movie that asks the question “If a man falls in the wilderness and no ones around, does he make a sound?”  It may be small and compact, but Whitewash has a sure, strong voice that deserves to be heard.

Whitewash is now available on VOD and in theaters.