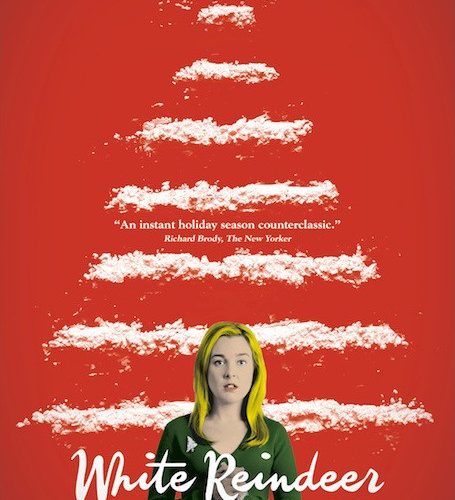 Just in time for the holiday season comes White Reindeer, perhaps the saddest Christmas film ever made. It’s also one of the better Christmas films to come out in some time.

Directed by Zach Clark and starring Anna Margaret Hollyman, the film opens on happy couple Jeff (Nathan Williams) and Suzanne (Hollyman) Barrington. They live in the Washington D.C. suburbs in a beautiful starter home. Suzanne sells real estate and Jeff is the local weatherman. It’s a month before Christmas and Jeff’s just got a new job that is sending them to Hawaii. Things are going well. Then Jeff is brutally killed during a home invasion, Suzanne returning home to find him dead on the floor. From this moment on, the film becomes Hollyman’s and she does well with the responsibility. As she struggles to wrap her head around the devastation of the event, little actions become grand struggles. She’s unable to buy meat at the supermarket because it reminds her of her husband’s caved-in skull. She’s unable to hold a normal, mundane conversation with anybody, especially her parents (Yvonne and Leo Erickson). She’s unable to do much of anything.

Hollyman’s been around for some time now, popping up in strong independent films such as The Color Wheel and Somebody Up There Likes Me. She’s very impressive here, selling heartbreak and confusion without ever overselling. Director and star feel very much in sync throughout, which helps the film navigate through the ever-darker narrative turns the film takes.

Clearly shot digitally on a shoestring budget, Clark and his production team do a good job building this small, sad suburban world that – though it borrows from many cinematic suburban hells from the past – feels very much original. We have all spent a Christmas in a town like this.

There are moments that feel a bit extended without much purpose (a lingering scene of dialogue in a car sticks out), briefly stunting the brisk pacing. At 82 minutes, this is mostly an extremely tight character piece, so every lagging frame weighs down on the proceedings. Supporting characters are thankfully kept at bay, and any type of quirk that’s allowed in some of the more outlandish, drug-fueled situations Suzanne forces herself into are anchored by the honesty of this woman’s quest to live free from her recent, tragic past.

That all of it takes place during the holiday season only adds to the long road back our heroine has to trek in order to return to any kind of normalcy. It’s a parallel that Clark makes the best of, infusing faith into this story without shoving it down our throats. It may not be the Christmas movie you were expecting, but White Reindeer might just be the kind of Christmas movie you need.