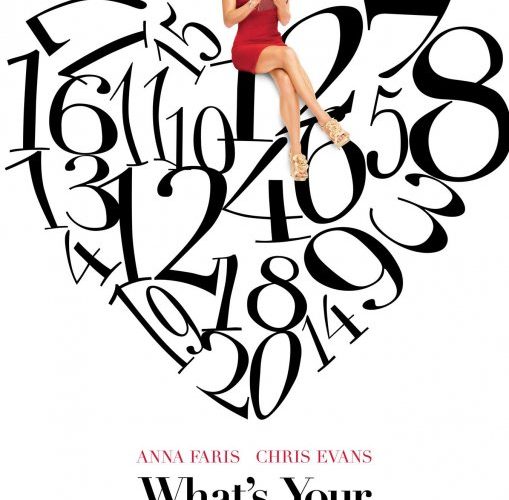 Ever since her days as the funniest actress in the Scary Movie franchise, I’ve always had a soft spot for Anna Faris.  She is, in many ways, one of the most underrated women in comedy.  She’s had some misfires (Smiley Face), but she’s also had some roles that have put her in the much-deserved spotlight, most notably in The House Bunny and Observe & Report. While she’s mainly praised for her physical comedy, her role in Mark Mylod‘s What’s Your Number? gives us a new look at what she’s capable of. The plot is, as expected, simple. Ally (Faris) reads a magazine article that asks, ‘What’s Your Number?,’ pertaining to the number of men a woman has slept with. If you’ve slept with 20 or more men, then you’re less likely to find a husband. Ally realizes her number is close to 20 and goes on the hunt to track down her old flings in hopes that one of them has changed over time and will be her future husband.

This is where Colin (Chris Evans) comes in as Ally’s womanizing, arrogant, self-centered neighbor. He agrees to help her track down her past transgressors in exchange for letting him use her apartment to hide from his sexual conquests the morning after.

And while Gabrielle Allan and Jennifer Crittenden’s screenplay is little more than a loose and modernized take on the standard romantic comedy, there’s more freedom in the performances. The more Faris is allowed to go wild, the better.

Faris is one of the select few actresses out there who has successfully proven she can carry a movie on her own. Unfortunately, a few scenes fall flat and Faris’ physical comedy is never given a prominent place to shine in the film. Overall, although What’s Your Number? offers both a realistic and sarcastic look at the adult dating world and features two enjoyable lead performances by Faris and Evans, it’s little more than another stock entry in the tired rom-com genre.

What’s Your Number? is now in wide release.