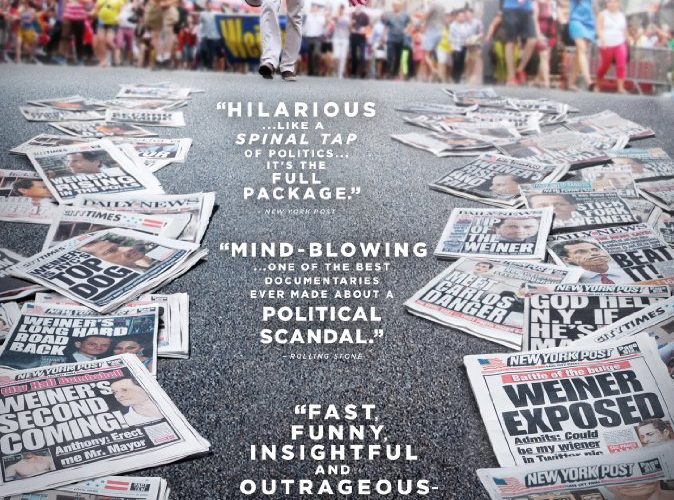 It’s often said that no writer can craft a character as complex and compelling as the subjects in some of our best documentaries. Enter the consummate example: Anthony Weiner, a seven-term former Congressman who became a political pariah following sexting scandals, the second of which occurred during his unsuccessful 2013 run for New York City’s mayor. Delivering one of the most intimate character studies in some time, Weiner confronts not only the media’s frenzied sensationalism but one’s own participation in the public amusement of an individual’s tragedy — in the most Greek sense of the word.

Rather than heavily relying on archival materials, directors Josh Kriegman and Elyse Steinberg catch one up on the story through a rapid-fire montage before the title card, leading up to Weiner’s bid for mayor in his home city. Given virtually unrestricted access to the campaign and personal life of the candidate and his wife, Huma Abedin — herself Hillary Clinton’s top aide — it’s staggering to witness the innermost locations the camera finds itself it. With this film having been culled together from over 400 hours of footage, we’re present the moment the Carlos Danger scandal breaks (the most expressive Weiner gets is with a profound “f*ck”) and when he questions why he even allowed a documentary to film him in the first place.

Weiner openly suggests, like many a politician, that he thrives on attention, admitting it could also be his downfall. Kriegman and Steinberg do a fascinating job painting this picture with narrow strokes, expanding on a story the world views as, in the words of Weiner, “just a punchline.” We begin with his impassioned, fiery speech in Congress skewering Republicans for voting against a health bill to aide ill 9/11 first responders, showing the initial promise he had in the world of politics. This passion is carried through to the vérité footage on the streets as we see his exuberance in meeting prospective voters, proudly waving a rainbow flag during a gay pride parade, and connecting to the community while speaking their language  — as opposed to Bill de Blasio’s nearly non-existent crowd. In a later scene, in the midst of scandal, he gives a speech to angry crowd and has them cheering for him by its conclusion.

It’s a careful balance the filmmakers attempt to achieve: by fixating too much on the scandal they could make themselves just as guilty as the various broadcasts that skewer their subject, from Stephen Colbert and Jon Stewart to, well, just about any news station. They perhaps tip the scales too much as it pertains to one of Weiner’s sexters, Sydney Leathers, and her intrusion on election day. When she attempts to confront Weiner, it’s presented as a De Palma-esque thriller, further sensationalizing the situation and offering little insight from Weiner and Abedin.

While Abedin and her commitment are presented as a saving grace for Weiner’s campaign, she remains both tight-lipped to the media and the filmmakers. Her feelings towards the situation are perhaps best summarized when Kriegman asks her about the re-emerging scandal and she answers, “It’s like living a nightmare.” Weiner‘s most truthful moments display the differing political approaches from the couple. In one revealing scene, Weiner gets motivation to write a speech from an interview where he verbally assaulted a newscaster. Meanwhile, his wife stands to the side, watching the footage with an ashamed, sullen face, proclaiming, “It’s bad.” If one wanted to extrapolate further, it serves as an almost too-perfect correlation with Trump’s current exaggerated hijinks as Clinton watches in embarrassment.

Even divorced from scandal, Weiner makes for a captivating, sadly comical look at the machinations of the political process. Kriegman and Steinberg help separate the idyllic fantasy fabricated by both Weiner’s campaign team and the media with single cuts. When Weiner partakes in a heated nightly news segment in which the interviewer is in another room, we cut from the glamorized final broadcast to Weiner seemingly yelling at himself, isolated in a quiet room. Another scene finds him taping a new political campaign video in a house and, again, we cut from the glitzy, genial final product to Huma’s point of view, anxious about the request to appear alongside her husband to support him (she eventually declines). By stripping away this politically correct, media-friendly view, the directors show the multitude of (sometimes ugly) decisions that shape what eventually comes to our screens.

Throughout Weiner, the question on everyone’s mind is “why?” His campaign members are asked it in regards to their support of Weiner; the community asks it when it comes to continuing after two scandals; his top advisors ask it when he’s clearly going to lose; as a viewer, witnessing his dedication from the inside after every interviewer questions him about his personal life, we wonder if there will be a breaking point; even his wife stops supporting the campaign. Yet it’s this perseverance that makes Weiner a compulsively engrossing portrait. Amidst the unending barrage of attacks from every corner, we witness a man that, in all of his self-destruction, has unwavering hope he can make his city a better place — even for those that ridicule him.

Weiner opens on Friday, May 20.