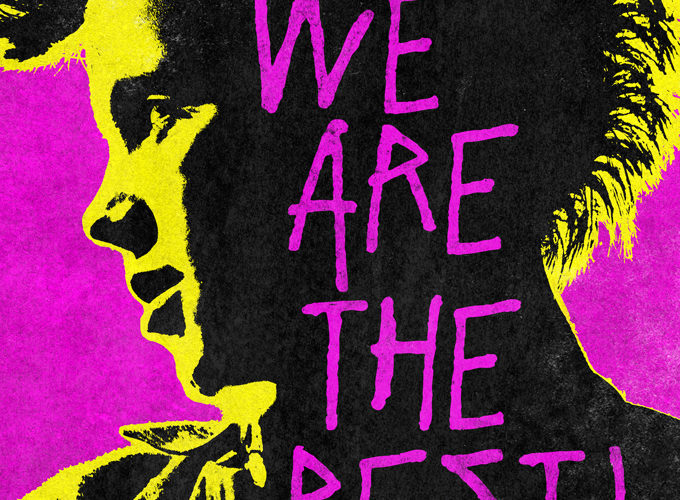 [Review] We Are the Best!

The opening title card to Lukas Moodysson’s joyous and vibrant film We Are the Best! reads, “Stockholm 1982″ while early scenes consist of idle discussions about taxes and arguments about the laundry. These opening minutes suggest that “Stockholm 1982” is a city populated with older residents entrenched in rigorous domesticity. Bobo (Mira Barkhammar) and Klara (Mira Grosin), our thirteen-year-old heroines, want no part of this world. They sport botched mohawks and hide their femininity behind thick glasses and baggy clothing. Their greatest act of defiance is their affinity for punk music — a trend, they are promptly reminded by their angelic looking classmate, that’s long been dead.

The defining musical acts for Bobo and Klara are the prolific figures Ebba Grön and KSMB. These musical acts, along with an offspring of devoted and bold imitators, formed a lively Swedish punk scene in the late 70s and early 80s. It’s easy to spot the lineage between these Swedes and iconic global acts such as The Clash and the Sex Pistols. The musical compositions and aesthetics centered around these artists are prominent in the film; Bobo drowns out her mothers raunchy middle-aged parties with punk pulsating through her headphones and filling the sonic landscape. Although Klara and Bobo love punk, they are not the most accomplished figures to carry on the tradition established by the previous generation of rockers. Moodysson highlights their naïvety and unbridled earnestness making their gradual transformation into musicians incredibly rewarding. They haven’t written that life-affirming song yet; they haven’t serenaded a producer with only their voice and a guitar; they aren’t even if sure if they should know about chords to play the drums. What they lack in technical expertise, however, is amply covered by their spirit of rebellion. Their first jam, a cacophony of raucous, finds them working through their own youthful insecurities and declaring themselves “The Prettiest Girls in Town.”

We Are the Best! wins its audience over fairly quickly with its chaotic and energetic spirit. Scenes erupt into unexpected arguments and dramatic confrontations like the one in which Karla attempts to infuse lyrics about African children and reactor meltdowns into the song. The film even develops its own set of rallying cries — “abort the parents!” and “hate the sport!” are the anarchistic appeals at the center of Bobo and Klara’s musical career. As the two girls progresses further away from the surface of domesticity (Stockholm 1982) into the world of punk (where you can find a kindred band in a phonebook), the emotional struggles they endure prove compelling. These young girls, while boldly reassuring themselves they are in the “world’s greatest band” (echoing the great proclamation by The Clash as “the only band that matters”), are not equipped to deal with schoolgirl crushes, overbearing parental units, and peer pressures. There’s also the metamorphoses of their adopted lead guitarist Hedvig (Liv LeMoyne), a classmate who is a devout Christian and an enormously talented guitar player. The greatest foil to their dreams and plans may be a rival punk group whose lyrics are politically sharper and more cutting than Bobo, Klara, and Hedvig’s lyrical condemnation of gym class. Their competitor’s lead song, “Brezhnev and Reagan, “Fuck You,” is the type of material more in step with the drastic political sensibilities of this genre of music.

The three young girls turn in exquisite performances and director Lukas Moodysson assuredly guides their distinct personas with levity and skill towards the film’s atypical climax. No, Bobo, Klara, and Hedvig, are not guaranteed to succeed as musicians, but their defiance towards the smaller injustices of their domestic lives will make them a force to contend with and cherish long after the film ends. We Are the Best! earns its title and its fury.

We are the Best! hits theaters on Friday, May 30th.