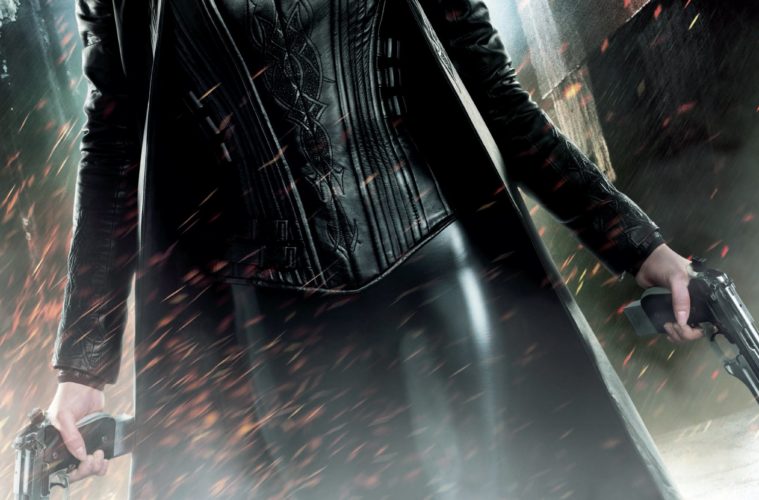 I like dark, sci-fi actioners and I’m unafraid to admit it. I’ve seen every Underworld and Resident Evil in the theatre and anticipate continuing that trend until their respective series die. My interest in each comes from different motivations, though. No matter how cheesy and overly-stylish the vampire-versus-lycan war gets, it retains its intriguing mythology as a backbone to the carnage. On the flip side, Alice’s adventures against Umbrella ratchet up the aggression for non-stop fight choreography deflecting from the fact all four films have the same basic plot of surveying a post-apocalyptic zombie-infested wasteland. So, upon standing at the end credits of Kate Beckinsale‘s return as Selene in Underworld: Awakening, I scratched my head wondering when the two franchises swapped ambitions.

The list of credited screenwriters reveals Len Wiseman‘s consistent inclusion throughout the quartet as secondary to the glaring absence of Danny McBride here. Obvious the man who took the most care with the world’s mythology, Wiseman appears happy to simply string action sequences together without worrying about the need to advance overall character history of those he plays with. For most of the film we believe lycans are extinct anyway and begin to cultivate a new dynamic of vampires versus humanity after they purged Earth of all night creatures in a mass genocide finally uniting mankind as one against a common enemy. And with an imprisoned Selene awakening from a twelve-year slumber where it appears her species is destroyed and martial law rules, it becomes impossible to delineate her from Milla Jovovich‘s increasingly stronger badass from Resident Evil.

I guess it shouldn’t be too surprising a progression since Underworld: Evolution went for more action and less story too. At least it had a brilliant bit of expository enlightenment from Derek Jacobi towards the end. With Awakening, there’s very little besides wall-to-wall action as a ‘stand-in’ Michael, (Scott Speedman was too busy to reprise his role? Really?), is killed within five minutes leaving Selene to wander the streets alone in search of fellow facility escapee, Subject 2 (India Eisley). The plot moves rapidly from there as our favorite leather-clad heroine cuts through obstacles with ease before finding the girl, discovering vampire covens still exist, and learning lycans have become more powerful than anyone could have imagined. With behemoths like Quint (a very Chris Martin-looking Kris Holden-Reid) able to pulverize and withstand silver, this fight just got serious. But making the story into Selene versus the world removes us from the ancestral war I’ve come to love. Coming through a bit at the end, waiting until the climatic battle for a return of the series’ heart from almost a decade ago is too late. The fight choreography is entertaining and watching Beckinsale flipping, murdering, and sexily slinking around is great, but for what end? If I wanted watered-down Underworld to the point of action over substance I would have simply waited for Resident Evil: Retribution. Give me more mystery than a redundant reveal of duplicitous intent on behalf of Antigen—the genetics laboratory searching for a cure to these abominations—and make me want both species to survive. The beauty of Selene and Lucian (Michael Sheen) was their desire to bring piece to their people. All that sense of hope and fighting for a cause is absent.

So we watch a new generation of vampires hiding from humanity to eek out a limited existence underground and the impetuous son (Theo James) of a coven’s elder yearn for the days of old. It’s told lycans are all but gone and vampires all but neutered in order to make excitement in a revival of their bloody clash more potent, yet it only makes us realize how worthless the first half of the film is. Besides a couple fights and the introduction of a new hybrid in Eisley’s youthful rage while Michael is gone, Awakening becomes nothing more than a glorified commercial for more installments to appear relevant after a six year absence with nothing but a prologue helping us forget who Selene even was. I guess the worst part is that I still will be first in line for a ticket when Part Five is released.

I just wanted more than a stopgap. I wanted to have the memories of the first two films project fondly rather than make me clamor for the past. Even the good old-fashioned latex prosthetics have been replaced by computer generated lycans possessing easier movement and seamless ‘turning’ effects without the need of cutting away. Underworld has moved into the future and left behind the charm and intelligent storytelling many fans enjoyed in lieu of contrivances like Selene massaging a heart back to life. Yes, I’m sure a lot of audience members will love the action and violence like they do with any uninspired gunfights, but that’s not the series’ originally intent. The surface appears intact with the addition of a human ally for once in Michael Ealy‘s Detective Sebastian, but the overwrought meaty center has been removed.

I can only hope subsequent films bearing its name return to form. Hire back Danny McBride and see if he can save the franchise he helped create from becoming another vapid work of explosions and sex appeal that have riddled cinema with sub-par work for decades. Get rid of the 3D too while you’re at it. The gimmick was so unnecessary here that I almost forgot I was wearing glasses. What began as an independent phenomenon over-exceeding everyone’s expectations has officially evolved into a Hollywood cash-cow that never saw quite enough success to warrant becoming one.