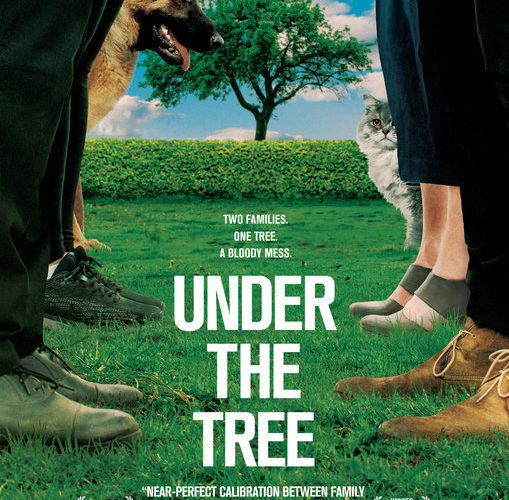 Review: ‘Under the Tree’ is a Darkly Absurd Comedy of Errors

If humans weren’t always the pettiest creatures on Earth, we’ve definitely earned the title this past century. Just think about how often you find yourself asking the question, “Let’s see what they’ll do about this?” I don’t mean hypothetically either. I’m talking about truly contemplating your next smugly biting (until an inevitable escalation leads you towards unforgivably heinous) act of vengeance to counter whatever your latest opponent in life has delivered. Eventually we forget how our duel began because our desperation to achieve a win proves too powerful to accept anything else. I’m sure this mindset has been exacerbated by newfound convenience through technology because things that used to occupy our time have been streamlined or replaced. The resulting boredom ignites an unquenchable desire for triumphant satisfaction.

What’s worse is that our opponents very often become people we cannot avoid. Our own frustrations and anger lead us down a slippery slope in search of an outlet — any outlet. We find ourselves in situations ready-made to facilitate self-implosion if for no other reason than willing conflict into existence. And we can project our feelings of resentment onto the most mundane trifles because those are generally the easiest to let snowball out of control. Why dig into topics that matter when we can start a war with a neighbor over the increased shade his/her tree is providing over our sunbathing area? Why risk confronting answers we’re not ready to admit about love, happiness, and family when we can yell with enraged vitriol at a virtual stranger instead? It’s this very real and relatable sense of rivalry that director Hafsteinn Gunnar Sigurðsson and cowriter Huldar Breiðfjörð have built their film Under the Tree around. By focusing on little things that irk their characters enough to hit their respective breaking points after having ignored larger, festering problems for too long, the filmmakers craft a darkly absurd comedy of errors out of authentically dramatic scenarios. For instance: Atli (Steinþór Hróar Steinþórsson) and Agnes’ (Lára Jóhanna Jónsdóttir) marriage, seemingly destroyed by his watching a video of himself having sex with another woman. What would normally be a serious moment of contrition and revulsion supplies laughter as he embarrassedly slams his laptop shut, forgetting that doing so only transfers the video to the larger monitor behind him.

This act of emotional betrayal — not yet provided its full context — becomes an excuse for DEFCON 1 rather than the much-needed conversation about how to move forward considering a child (Sigrídur Sigurpálsdóttir Scheving’s Asa) is involved. It becomes a pissing contest about control wherein Agnes changes the locks without warning and Atli goes full kidnapping stalker. One knee-jerk reaction leads to another until both sides become blind to what their petty shows of force are doing to their daughter as every single action arises from an individualistic notion of entitlement. Only when matters find themselves reaching a point of no return do Atli and Agnes begin confronting the deeper-seeded feelings that brought them to this place. And as many can attest, that clarity often comes too late. But theirs is just one of two conflict points. You could call it the control group to the other’s volatile experiment gone way, way wrong. Whereas Agnes and Atli definitely go too far in their interactions, their emotions are running high because of the child at the center of their relationship. Their example is told with subtle humor in their over-reactions and regretful decisions, but the severity where safety and trust is concerned can never be diminished. The war between Atli’s parents (Sigurður Sigurjónsson’s Baldvin and Edda Björgvinsdóttir’s Inga) and their neighbors (Þorsteinn Bachmann’s Konrad and Selma Björnsdóttir’s Eybjorg), however, is laughable enough to feel surreal. As mentioned above: the former has a large tree in their backyard (a rarity in Iceland), the latter all its shade.

We’re exposed to their aggression at the edge of civility after who knows how long. Konrad hopes Baldvin will trim the tree’s branches so Eybjorg can enjoy her sun, but Inga incredulously refuses saying he never cared when his ex-wife was around. So the two couples remain at odds, the tension unbearable enough that Baldvin calls a gardener to end this nonsense once and for all. Before he can arrive, however, the flames are fanned so this invisible fire engulfs them. What follows is psychological warfare no one can truly know is being fought by the other. We see that events varying from trespassing and property damage are happening, but only by their aftermath. Firmly believing the opposite pair to be ruthless, they each become so by default. Sigurðsson and Breiðfjörð brings everything together in a pot and kettle way since the chaos befalling Agnes and Atli forces him to move back in with his parents. This puts him in the front row to what’s happening over the hedge, his thinking things have gotten out of control ironic considering how he’s been handling his own mess. So we watch these two conflicts spiral until one finds its parties coming to their senses as the other devolves into pure insanity. The reasons for everything are tragic — I’ll only say that children play an important role in everyone letting themselves lose all form of decency — and the acting proves as much with many looks of disbelief, devastation, and malice. And it all culminates in an unforgettably jaw-dropping finale.

You’ll find yourselves laughing and hating yourself for doing so because Sigurðsson doesn’t play scenes for comedy despite very obviously writing for it. This is a testament to his direction and the actors’ heightened states of borderline farce played with complete sincerity. Things must appear real despite over-the-top theatrics because the underlying message goes beyond satire into revelation. To say you’d never go as far as these characters do is a lie because you know what it feels like to lose yourself to grief, pain, and uncertainty. Nobody knows what a given situation will incite until the moment and as such can’t dismiss the lengths onscreen. Our current “Me Me Me” culture ensures consequences and morality always place a distant second to instant gratification, no matter how fleeting.

Under the Tree opens in limited release on Friday, July 6.