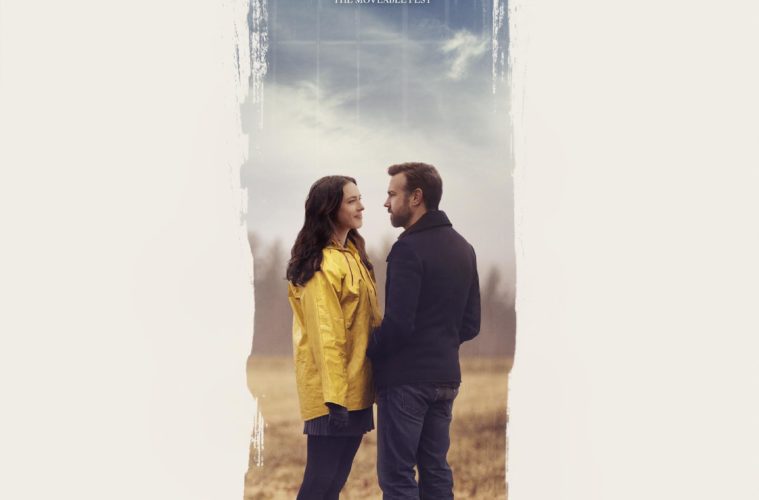 From its opening of characters listening in stunned awe to the music of a legendary fictional folk singer, Sean Mewshaw’s admirable but disappointing Tumbledown traps itself with unfair expectations. As a study of grief, it’s moving, featuring authentic performances and a keen understanding of the receding hibernation that comes with losing a cornerstone person in one’s life. As a romance, it’s slow-going but believable. And as a look at the unfair mythos attributed to the dead, it’s nuanced and incisive. But in attempting to balance these complementary parts, Tumbledown is buried by its own ambitions.

As it begins, Hannah (Rebecca Hall) is in pieces, clinging to loss out in a pastoral wilderness lodge in a small Maine town where she used to live with Hunter, her husband and the folk singer whose legacy precedes him. Hunter passed away when he slipped down a ravine while walking along a mountaintop, but the nature of his passing becomes one of the largest themes of the movie, offering a pronged discussion of fatalism vs. incident.

Hannah spends her days visiting his grave, banging her head against a wall trying to write his biography, and interviewing notable citizens for human interest pieces in a side gig at the local newspaper. It’s a tight-knit town, but Hannah’s a loner aside from rolls in the hay with Curtis (Joe Manganiello), a marble slab of a man with a penchant for delivering adorable animals, and a kindly bookstore owner (Griffin Dunne), who has been emotionally massaging Hannah since Hunter’s passing.

Tumbledown complicates with the arrival of Andrew McDonnell (Jason Sudeikis), a devoted fan, and another in a long line of writers who wants to write about Hunter’s legacy. Slowly, Andrew batters down Hannah’s defenses until she agrees to bring him in to help write the biography, and thus begins the set-up for a funereal meet-cute, and more resonantly, a story of moving forward for both characters.

The wind-up with Andrew and Hannah’s relationship initially falls flat due to beats that feel at once scattered and telegraphed, but soon her mordant temperament and his unrelenting sunniness finds an interlocking rhythm that allows further exploration of more meaty material, especially in a scene set at Hunter’s parents house where Hannah and Andrew spar until it unspools into a scene of unexpected intensity.

This becomes the beginning of the script’s inquiry with myth as Andrew has deep seated assumptions about who Hunter was based on his music. He has genuine love for the music, but he’s also wrapped up in the enshrined assumptions that he’s projected onto Hunter’s music. He wants so badly to contextualize him in the lineage of tortured songwriters like Nick Drake and Elliott Smith who used music as a way to push out darkness.

It’s a fascinating character dynamic in light of the ways that our culture digs so deeply into the narrative of the sacrifice of geniuses. But while it’s intellectually powerful, too often, the movie feels like it’s straining for profundity with ponderous scenes of the characters talking about Hunter’s legacy or visibly shattering while listening to his music.

The largest problem may be Sudeikis’ character whose flowery, ornate vocabulary is believable, but deeply annoying and unconvincing. It’s fair to say that it’s a representation of a delusional grandeur in his character, but even in scenes that are supposed to be taken at face value, it feels forced. A tamed Damien Jurado, an incredibly talented songwriter in his own right, stands in for the sacrosanct music, but it feels like a put on with its wintry fingerpicking and mumbled vocals.

There’s still brave scenes that work despite the overwrought scenarios. One scene involving Andrew and Hunter’s father visiting the place where he slipped ends with an unanswered question that shows the dangers of assumption. Similarly, the sudden discovery of a new song late in the movie compels Hall’s character to fall back into a personal hole, showing that even progress in grieving can come to a standstill at a moment’s notice.

As Hannah, Hall has a clear talent for playing emotionally resilient women, and her performance here is subtle and deeply expressive in showing a character who’s thawing after not experiencing a spectrum of emotions for years. Sudeikis as well, despite being irritatingly transparent, continues to show that he has a presence as a genuine romantic leading man. As the parents of Hunter, Blythe Danner and Richard Maseur are excellent as well, bringing in a frazzled, raw pathos.

But uniformly strong performances just can’t counteract that the supposed weight that reverberates throughout just doesn’t feel real. It’s tough to write a movie about geniuses in any medium, and Tumbledown buckles underneath the script’s needs. To be fair, it might feel even less convincing with the music left out, but there’s an automatic danger whenever a script needs to present someone who’s viewed with such a hallowed reputation.

The movie struggles even further to navigate this conflicted legacy as it heads down a path that positions Andrew’s character as a white knight who will save Hannah from her own sadness, which completely misunderstands the script’s earlier understanding that this relationship can exist adjacent without becoming a replacement. The last beat essentially completely cuts out the third angle for a shortcut ending about moving forward, but that shadow doesn’t just disappear.

Tumbledown is now in limited release.