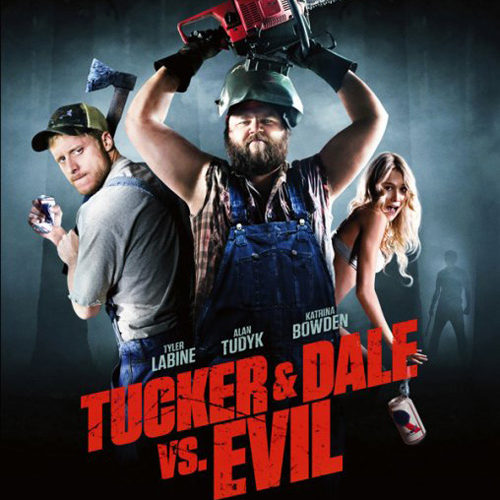 Tucker & Dale vs Evil is a surprise in that it takes what feels like a one-note sketch idea and makes it work as a funny, ear-turning feature comedy. Instead of gag after gag, there’s an actual story being told here. Through all the impressive and unique kills, director Eli Craig manages to find the heart in it as well.

Much credit must be given to the two leads, Tucker (Alan Tudyk) and Dale (Tyler Labine). These are good, lovable best friends; two people the audience will wish they could hang out with afterwards. One of the main gags of the film is how the duo aren’t your typical movie rednecks. They’re first hilariously introduced through the eyes of the young college kids, a.k.a. Evil, in the way that they see them: the guys from Deliverance or the family from The Texas Chainsaw Massacre.

This joke is not played on too long, and Craig approaches the rest of the comedy the same way. There’s a constant momentum in the film, with the help of tight pacing and fine comedy storytelling. Each new kill builds up the narrative, and when it doesn’t they’re so much fun they work stand-alone pieces. They’re all distinct from one and another. Like the best movie kills, they are not interchangeable. When something may not work, the structure continues to move forward.

Unfortunately, there’s one kink in the system: the main college kid, Chad (Jesse Moss), who is a woefully miscalculated villain. He disrupts the third act, changing the tone of everything the film’s built on, preventing the grand finale Tucker & Dale vs. Evil deserves.

It is an overly hammy performance, and while that’s fine for something more wacky, the sensibility does not belong in this film. The rest of the ensemble, especially Tudyk and Labine, come off like they are from this planet. Chad gets more focus at the end, and it drags the film down. This is made even more bothersome since Tudyk is absent during the final confrontation.

And though the end doesn’t quite justify the rest, Tucker and Dale will still have you wanting to go fishing with them one day.