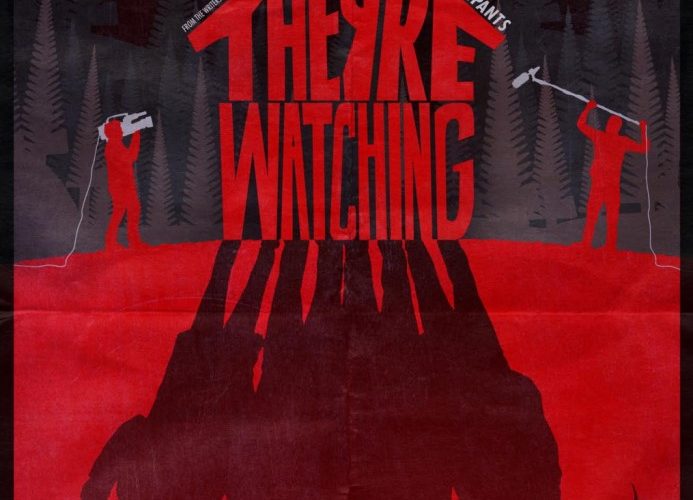 What do you get when you combine uninventive found footage, a location chosen specifically for its cheap production costs, and CGI the likes of which has not been seen since the mid-1990s? Such a recipe could only result in They’re Watching, a horror comedy whose filmmakers appear to have no basic knowledge of how either genre works.

In all fairness, the film does bait its hook with an auspicious premise. Set in the former Soviet republic of Moldova (it was actually shot throughout Romania), it captures the crew of a House Hunters International-type reality show as they return to a remote village to follow up on a money pit acquired by a wealthy American artist (Brigid Brannagh) and her Eastern European footballer husband (Cristian Balint). As expected, a classic rural vs. urban conflict begins when the outsiders crash and secretly film a sacred funeral, causing the deeply superstitious populace to become hostile. As the shoot progresses, the crew’s situation becomes exceedingly more dire when they’re forced to contend with encroaching angry villagers and a possible witch.

The clash between old and new worlds sets up plenty of opportunities to criticize globetrotting makeover shows like House Hunters International and their obsession with culturally insensitive, rich westerners. How naive of me to think a movie proudly promoted as being “from the writers of Call of Duty: Black Ops II and SpongeBob SquarePants” would provide incisive commentary on borderline-colonialist privilege.

Not that the film casts spoiled Americans in a particularly positive light, as it trots out such stereotypes as the smarmy jerk producer, the vicious, foulmouthed exec, the eager, but dim intern, and the former war photographer who totally saw some shit in Afghanistan. The only redeeming character is a sleazy Russian real estate salesman/translator (played charmingly by Dimitri Diatchenko) whose broad comedic shtick includes a Yakov Smirnoff-like catchphrase and a tacky, dated wardrobe. Despite the unflattering portrayal, his few moments of playing peacemaker between the ugly Americans and the Moldovans imbue him with more humanity than he probably deserves.

Tired jokes and uninspired gore abound in what amounts to an unbearable experience, and that’s before the climactic bloodbath has a chance to disappoint with its sub-amateur special effects. Incessant whining about the lack of Starbucks tries to pass for humor, and shaky cam shots of creepy natives try to pass for horror in the debut feature from Micah Wright and Jay Lender, two guys with extensive backgrounds in animation, comic books, and video games. While they may know their way around a drawing table, they apparently have a lot to learn about filmmaking.

They’re Watching is now in limited release and on VOD.